Owner says redevelopment ‘on the back burner’

The U.S. Environmental Protection Agency, in its latest five-year report on the environmental health of the former Marathon Battery Co. site in Cold Spring, says the groundwater beneath the property remains polluted and will continue to be monitored. It also found that nearby Foundry Cove Marsh has not yet fully recovered from years of discharge into its waters.

Ken Kearney of Kearney Realty, who purchased the 12-acre Kemble Avenue parcel in 2003 with a plan to build a mix of residential and commercial buildings, said development remains “on the back burner” while his company focuses on other projects in the Hudson Valley.

The battery factory operated from 1952 to 1979, producing nickel-cadmium batteries for the U.S. Army and commercial sales under a succession of owners. 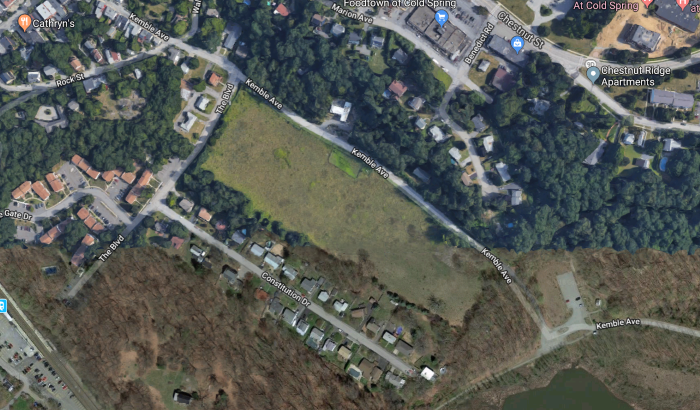 Over much of that time, the factory discharged effluent into the Hudson River at the village dock through the Cold Spring sewer system. When the system shut down or was overloaded, waste containing cadmium, nickel and cobalt was discharged into Foundry Cove. According to the EPA, the cadmium made its way through the food chain and affected invertebrates, crab, fish, birds and muskrats. The factory also spread contaminated dust into the soil and onto neighbors’ yards.

The EPA prohibits digging wells anywhere on the Marathon site or excavating below a depth of 15 feet near Kemble Avenue (where a cadmium nitrate tank leaked into the soil), and the latest report indicates those bans will continue. Local drinking water was never compromised because Cold Spring’s water comes from reservoirs located north of the village.

1952
The Army Corps of Engineers built a 46,000-square-foot battery factory on the northern, 7-acre portion of the 12-acre parcel. Around the same time, homes began to go up on what is now Constitution Drive.

1962
The Sonotone Corp., which had occupied the plant since it was built, making batteries for satellites under contract with the Army as well as for cordless shavers and flashlights, bought the factory from the government for $935,000 [about $8 million in today’s dollars], with plans to add a 35,000-square-foot addition.

1965
The state determined that a sewage treatment plant being constructed for the Village of Cold Spring could not handle industrial waste, so Sonotone built its own wastewater plant and sent its discharge into East Foundry Cove.

1966
Sonotone bought the southern, 5-acre portion of the site, which had been planned for a subdivision called Crestview that never materialized. The company used the land for a parking lot, water tower and to bury contaminated sediment.

1970
The federal government sued Marathon to stop the discharge of toxic chemicals.

1971
Three fish caught by an Audubon official and Robert Boyle, a writer for Sports Illustrated, near the mouth of Foundry Cove contained 1,000 times more cadmium than expected.

1972
The Environmental Protection Agency ordered Marathon to dredge the cove. More than 90,000 cubic meters of contaminated sediment were buried in a clay-lined vault on the factory property. The effort was “not totally successful,” the agency said, and Foundry Cove for a time was known as the most cadmium-polluted site on the planet. 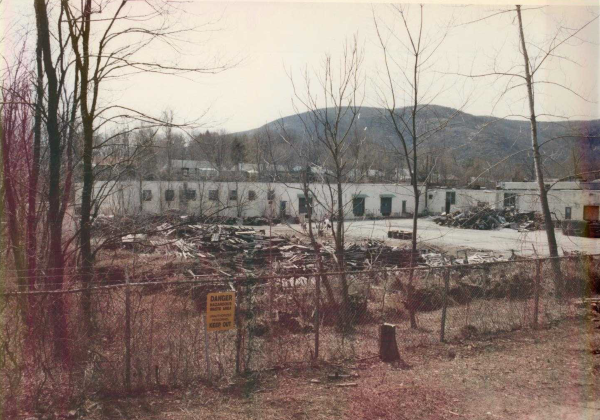 1979
After Marathon closed the plant and relocated, the 114,000-square-foot building was used to store 2.5 million books.

1981
Citing a 1980 law, the EPA designated the area as a Superfund site, which compelled its owners to clean it up or reimburse the government for the work.

1986
In a process that would take nine years, the EPA began dredging East Foundry Cove Marsh and moving the contaminated sediment off-site on rail cars along tracks built for the cleanup. Ultimately nearly 190,000 tons of treated soil was transported on 1,979 rail cars to landfills in Pennsylvania and Michigan as well as to Model City, New York, which in the late 1970s had become infamous for its own Superfund site: Love Canal.

1989
The EPA ordered Marathon, Gould Inc. and Merchandise Dynamics, which by then owned the property, to decontaminate the factory, the books, the grounds and nearby yards, which took six years. 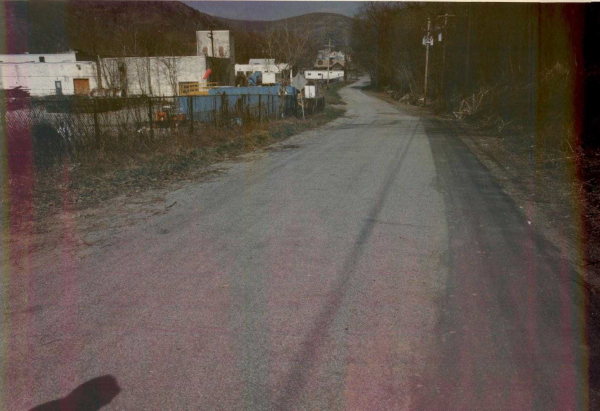 1993
The 2.5 million books, now decontaminated, were recycled. Marathon, Gould Inc. and the U.S. Army agreed to pay $91 million toward the cleanup, as well as $13.5 million to the EPA for its previous work and future oversight. The clay-capped vault buried from the early 1970s was excavated. More than 145,000 prehistoric and Civil War artifacts were recovered from the grounds.

1994
After ice and snow build-up caused a 10,000-square-foot section of the factory roof to collapse, the EPA ordered the building demolished. Dredging began in the Hudson River near the Cold Spring dock. 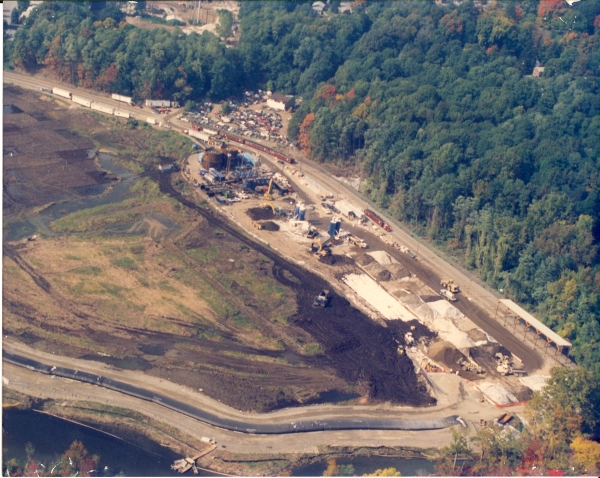 1995
The East Foundry Cove Marsh was capped with clay, covered with soil and replanted with vegetation such as cattails, bull rushes, arrow arum and upland shrubs, with the goal of 85 percent coverage. But parts remain as mudflats or covered with invasive water chestnut.

1996
The site was removed from the Superfund priority list. The Scenic Hudson Land Trust purchased 85 acres along the Hudson, including the East Foundry marsh and cove, that had been part of the larger site, to be managed by Audubon.

2003
The 12-acre factory parcel was purchased from Gould by Kearney Realty. 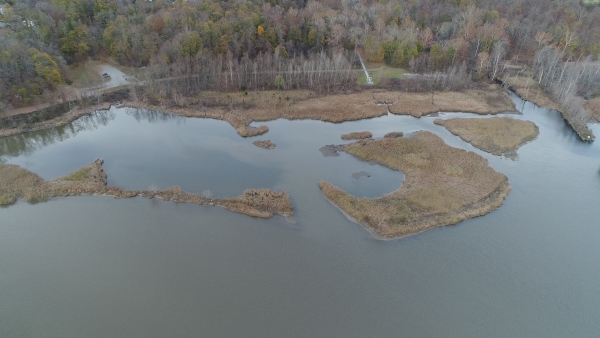 2005
The EPA attempted to inject the groundwater with “an easily degradable carbohydrate solution” to promote microbial activity to consume the contaminants. Eighteen months later, tests showed it had not worked.

2007
In a survey of Cold Spring residents, 45 percent said the site should be turned into a parking lot, 17 percent suggested a recreation park, 14 percent wanted open space, 8 percent said housing and 3 percent asked for a community center.

2009
The EPA tested the basements of 10 homes on The Boulevard and Constitution Drive for vapors from the pollutants and recommended one home be monitored. (A mitigation system was installed instead.) The main source of groundwater contamination, the EPA said, was a solvent shed formerly located near the southwest comer of the factory. 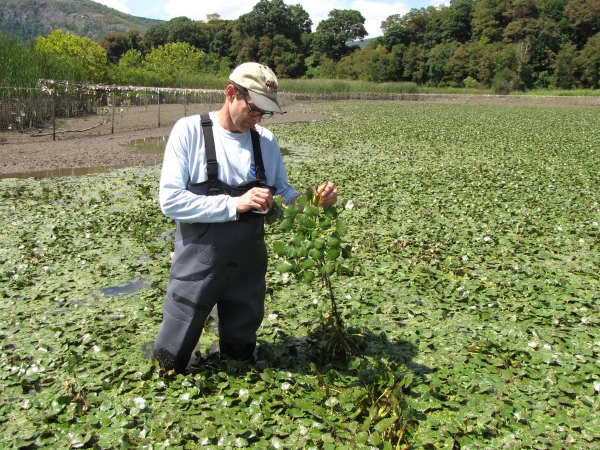 2012
The EPA installed a vapor extraction system, which over the next two years removed 30 pounds of pollutants from the soil.

2018
The EPA continues to monitor the site by testing groundwater, taking sediment samples from East Foundry Cove and conducting annual inspections of the marsh to check the clay cap and monitor vegetation. Its next five-year report will be ready in 2023.