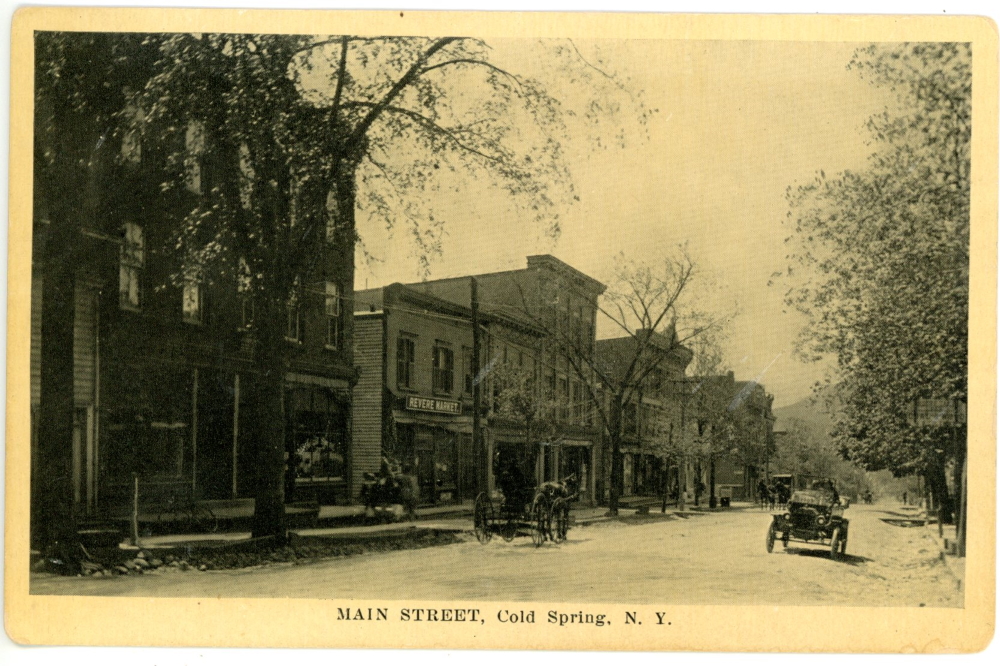 Main Street in Cold Spring around 1915

Ron DeSilva, who died on July 30, was the chairman of the Cold Spring Planning Board when, in 1975, the village created an architectural review board. This past week, Village Clerk Jeff Vidakovich pulled from the files the typewritten minutes of the public hearing held on Jan. 30, 1975, and Deputy Mayor Marie Early shared it with Ron’s widow, Barbara DeSilva, who passed it along to The Current. It is excerpted below.

“When we moved to Cold Spring in 1972, it was like a ghost town,” Barbara recalled. “Most of the shops were boarded up. It took a while to convince the residents that preserving the architecture was so important. They were distrustful of the ‘carpetbaggers.’ ”

VILLAGE OF COLD SPRING PLANNING BOARD

RE: PROPOSED ARCHITECTURAL AND HISTORIC DISTRICT REGULATION FOR THE VILLAGE OF COLD SPRING, NEW YORK

The Hearing was called to order at 8:05 p.m. by Chairman DeSilva.

Chairman DeSilva told those in attendance that the Architectural Review Board was first formed approximately five years ago at the time James Early was mayor. It was also brought to attention that the Board has been working on this proposal for the last two years and was a recipient of a grant to have Dr. James M. Fitch, professor of architecture at Columbia University, do a report on the Village. Dr. Fitch visited our area several times and found it to be one of the best preserved towns on the Hudson River.

When Dr. Fitch did his study he found Cold Spring in a generally remarkable state of preservation and enhanced by the scenery.

We have had a major change in the Village on Main Street now that the bank has moved and this might pose a problem for the business district. There is also a pretty good chance we are going to lose one of the grocery stores on Main Street. All of this could possibly contribute to the drying-up of Main Street.

Tourism could be a major industry in our Village as it is in many countries in the world. We have many historical sites in town which would enhance the tourism such as Boscobel Restoration, the Chapel Restoration.

The Hilton Hotel did ask about the Architectural and Historic District and requested to be included within that district. You will find that the whole Foundry area is included in the district.

You probably have noticed a lot of visitors to the village. The shops are crowded and it is just not the antique shops. The hardware stores, grocery stores, etc., are busy, too. This proposal in many ways could help the village money-wise.

There is the possibility that the larger homes could be tourist homes giving owners of these buildings an income.

This law could result in a complete renewal of this village. The law does not force you to restore your house to the way it originally was. If you wish to gut the interior of your home and make one big room, you may do so. The law only deals with the exterior. There will be no change in the zoning, the districts stay the same. The law attempts to preserve the exterior and architectural features of the village where it gives on to a village way. If you wish to erect an addition on the rear of your house you are free to do so following the normal procedures.

The proposed Architectural Review Board will consist of five members, all of whom must be village residents and three must be of the district.

The Board of Trustees of the Putnam County Historical Society has passed a resolution in favor of this proposal.

Several changes have come about as a result of the last public hearing.

One of the most important things is that if the proposed law was put on the books in some form or other it could result in the Village of Cold Spring being placed on the National Register of Historical Sites.

One of things we are keeping in mind, depending on response, is a tax abatement plan, if the proposal is adopted. This is so if an individual renovates his structure he does not get clobbered with high taxes all at once. Again, this is just one of the proposals.

At the last hearing it was brought up that the proposal be placed on a referendum. That, again, is not within the duties of this board; we can only recommend….

We will now open the floor to questions and comments.

THOMAS A. COLLINS, ATTORNEY AT LAW, 126 Main St., Cold Spring, N.Y.: I am a property owner and also representing George Giametta who resides in Cold Spring. I had a wood railing around my porch and kids ripped it off and I put up iron rails. Is this all right to do?

CHAIRMAN DESILVA: This is for the building inspector to deal with, not our board. This is not a law.

JOSEPH LANDOLFI, Fishkill Ave., Cold Spring, N.Y.: You said before you could put an addition onto the back of the house.

CHAIRMAN DESILVA: You can put an addition where it does not give to the part faced by the public.

SYLVESTER MERANTE, Belvedere St., Cold Spring, N.Y.: What I think we are trying to find out here is that anyone living on the corner of two streets would have to conform with the present conditions of the building according to architecture.

CHAIRMAN DESILVA: The map of the proposed district is entirely not accurate. The area in white near Constitution Drive is still in question pending a court decision.

JAMES MCCANN, River Rd., Cold Spring, N.Y.: Contrary to what your board may think, I feel this is a surrender of a right. Six months has been spent on this and the welfare of the village has been neglected during these months. What we need is to create jobs. Nobody likes this village more than me. I would like to see Cold Spring stay the way it is, but better jobs are needed for the people. Fishkill has not been destroyed by its progress. There used to be three grocery stores on Main Street and only one is left.

How this proposal ever got by the Village Board of Trustees I will never understand. We have a Zoning Board which is a comedy.

CHAIRMAN DESILVA: Please keep in mind that this law is attempting to preserve all buildings within the district. The Architectural Review Board will be there to help and guide.

THOMAS J. DALE, 142 Main St., Cold Spring, N.Y.: I agree with many others that this proposal should be submitted on a referendum. I suggest this board make a recommendation to the Board of Trustees.

There seems to be a little confusion as to use. Would this proposed law effect the use of the building?

CHAIRMAN DESILVA: This law does not in any way effect the interior use of the building.

THOMAS J. DALE: Perhaps I am interpreting Section B. – Public Policy – of the Proposed Architectural and Historic District Regulation of the Village of Cold Spring, New York incorrectly. “The Board of Trustees of the Village of Cold Spring hereby declares as a matter of public policy that the protection, enhancement, perpetuation, preservation and use of improvements…” Perhaps the word use should not be in the proposal.

CHAIRMAN DESILVA: This law does not in any way deal with the interior use of the building now or in the future.

THOMAS J. DALE: My next point is also on the section Public Policy. “…of historic, aesthetic and architectural value is a public necessity and is required in the interest of the health, prosperity, safety and welfare of the people.”

The words health and safety should be omitted.

[Dale made five additional technical suggestions for the wording of the proposal.]

CHAIRMAN DESILVA: I would like to thank Mr. Dale and mention that the suggestions are quite valuable and will be used accordingly.

J. ESPOSITO, Parsonage St., Cold Spring, N.Y.: First I would like to ask if this proposal was drafted by all of you?

CHAIRMAN DESILVA: It was drafted by the Planning Board and the Architectural Review Board.

J. ESPOSITO: Can the Architectural Review Board supersede the Board of Trustees?

CHAIRMAN DESILVA: The Board of Trustees cannot reverse the decision of the various boards.

MICHAEL KELLY, Main St., Cold Spring, N.Y.: We have to look to the future. If we don’t do something now it will be too late. Things are starting to shape up for the village.

CHAIRMAN DESILVA: If there are no further questions or comments the meeting is adjourned. 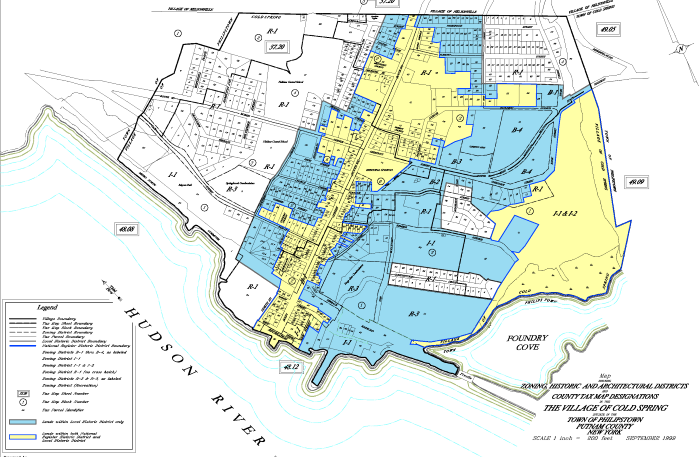