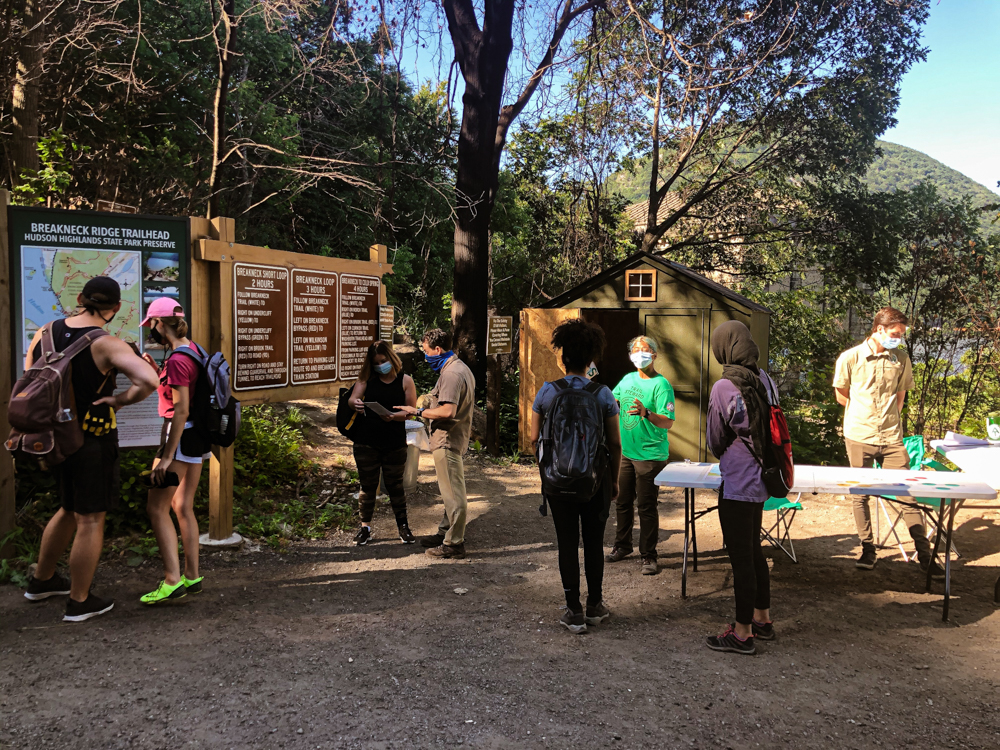 A busy Saturday at Breakneck. (Photo by B. Cronin)

It was 9 a.m. on a clear, blue Saturday morning, with both sides of Route 9D already lined with cars, when a group of hikers approached a folding table at the Breakneck Ridge trailhead. Behind the table, Michael Murphy readied an array of maps, Sudha Petluri thumbed a clicker to count the visitors (70 since 8:30 a.m.) and Rich Zayas smiled widely, or he appeared to, beneath his mask.

“Welcome to Breakneck Ridge!” he said. “First time here?” It was. “Great, thanks for coming! Do you know which loop you’re doing?” Silence.

Murphy, Petluri and Zayas are trail stewards for the New York-New Jersey Trail Conference. That silence is the reason they are stationed at the trailhead. If the hikers don’t know which loop they’re doing, it’s usually because they don’t have a map. If they don’t have a map, they’re more likely to get lost, go off-trail, trample ecosystems, run out of water and make an increasing series of bad decisions that, at best, will lead to a lousy day in the mountains or, at worst, a rescue operation.

“We’re not here to lay down the law,” Zayas assured the hikers. “We want to make sure you have the best possible time.”

After the stewards handed out maps, went over routes, and made sure everyone had enough water, the group was on its way. Petluri’s clicker kept clacking as another group approached. By the time the stewards left at the end of the day, 915 hikers had passed.

It was a slow day. A typical deep summer Saturday at Breakneck, which by volume is the most popular hiking trail east of the Mississippi, might bring closer to 1,200 hikers. In the past, according to surveys, about a third of the hikers came from New York City, but Metro-North is not making its usual stops at Breakneck Ridge because of the pandemic.

Many hikers have been asking the stewards to direct them to less popular trails to avoid the crowds at Breakneck that make it difficult to social distance. About 90 percent of the hikers wear masks, the stewards said, although most don’t put them on until they get to the busy trailhead. 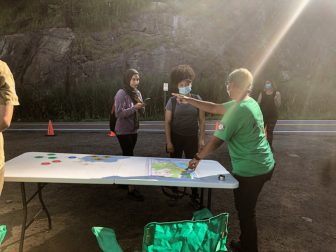 Petluri points out where the Wilkinson Trail ends up. (Photo by B. Cronin)

Experienced hikers who have already scaled Breakneck still show up. The stewards know them as the people who already have maps. But with outdoor recreation being one of the safer leisure activities during the COVID-19 shutdown, more inexperienced hikers are showing up ill-prepared. One couple on this Saturday said they planned to hike from Breakneck to the Mount Beacon fire tower and back.

“OK, great,” said Zayas. “Just so you know, that’s an all-day hike, and you’re going to want to have at least three liters of water per person because there’s not a lot of shade once you get up on the ridge.”

They opted for a different route.

Sometimes the stewards station themselves at trail intersections, which Petluri said she enjoyed. A New Jersey native with an interest in education and the environment, she hiked Breakneck last year for the first time and fell in love with it. Soon after, she joined Americorp to do trail maintenance and stewardship. As part of her duties, she works with the Trail Conference at Breakneck and a few other hot spots, such as Bear Mountain.

“I’m of the mindset that this land is for everybody, so we all have to take part in preserving it,” she said.

She was interrupted by barking. A small white dog rounded the corner, dragging its owner. “What happened?” asked Petluri, since the stewards recommend not doubling back down the steep face of Breakneck.

“She got tired halfway up,” the man said, pointing to the dog. None of the stewards seemed surprised; they warn those who come with dogs to be prepared to carry them down. Petluri redirected the hiker to a more pup-friendly trail nearby. 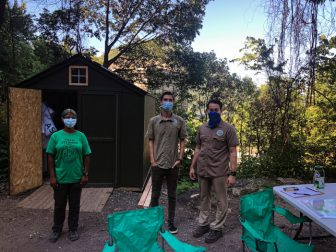 Petluri, Murphy, and Zayas (Photo by B. Cronin)

The stewards keep a cellphone on the table; its number is listed on the maps they hand out to hikers. Occasionally they have to climb the trail to help someone or provide first aid, but their job is largely to prevent that. Before the trail steward program began a few years ago, Philipstown first-responders would receive several calls each weekend from lost and injured hikers.

The stewards said some hikers only take a map after being told that it has a phone number they can call if they see another hiker in trouble. Everyone wants to be a hero, but no one ever thinks that they’ll be the ones who need help.

That tactic worked on a group of younger hikers as they begrudgingly took maps and headed up the trail. Out of earshot of the stewards, one grumbled that he didn’t think they would need maps.

“No one thinks they need a map until they get lost,” said one of his friends.

One thought on “Out There: Maps as Preventive Medicine”