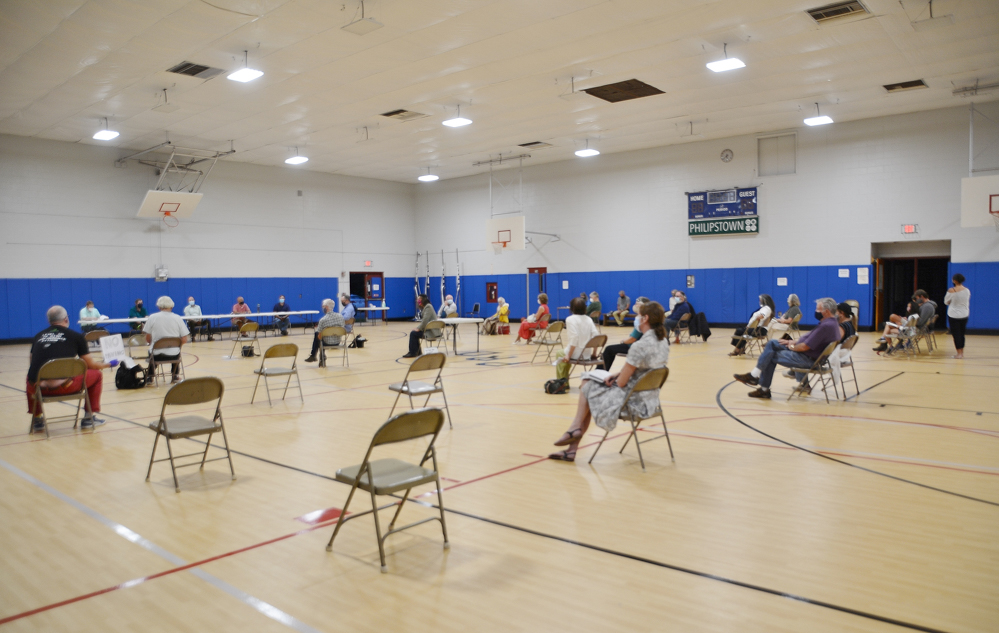 The Philipstown Town Board workshop on Aug. 26 allowed room for debate. (Photo by L.S. Armstrong)

Residents warn of speeders and other dangers

From South Mountain Pass in southernmost Philipstown to East Mountain on its northern border, dirt-road fans on Wednesday (Aug. 26) urged the Town Board to scrap plans to pave an 1,111-foot stretch of East Mountain Road South.

They commented during a board workshop held in Garrison at the town Recreation Center, where attendees — about 30, including at least one paving supporter — and board members wore masks and filled socially-distanced chairs.

Supervisor Richard Shea said board members would likely vote on Thursday (Sept. 3) on whether to proceed with the project.

Critics warned that paving the short stretch would encourage speeding and detract from the road’s natural beauty; they also said they fear for the remaining unpaved road to Wiccopee.

Shea, who once lived on East Mountain, expressed surprise at the furor. He said the project was approved in 2014 but delayed twice due to contingencies. Now, he said, the town can move ahead.

The supervisor agreed that paving the road to Wiccopee would probably increase traffic and cause other problems, “and that is a big concern.”

Garrison resident Barbara DeSilva advised the board to be wary. “Our dirt roads have a certain importance,” she said. “They’re assets to the town. Once you pave them, they no longer have the same appeal or meaning. They’re gone.”

East Mountain Road resident Richard Butensky advised against paving the 1,111 feet. “The thing that’s not debatable is that traffic is faster on paved roads,” he said. “The more asphalt we have, the more traffic we’ll have and the faster it will go. I don’t think it’s worth it.”

Town Board Member John Van Tassel, who lives on East Mountain Road South, said that when residents complain about speeding, town officials typically discover that “95 percent of the tickets were given out to people who live on the road. Then we get complaints” from them, too. “Nothing controls your speed,” he added. “It’s not anything that has to do with the road. It’s the person driving the car.”

Vera Keil, who lives on Trout Brook, off the road to Wiccopee, praised the board for the paving that has already occurred on the mountain. She discounted the notion that paving wrecks aesthetics. “The 12-foot stretch of asphalt is not going to take the bucolic beauty away,” she said.

Shea described dirt roads as “a maintenance issue, an environmental issue, a cost issue. It’s just become sort of prohibitive on all fronts.”

He attributed the environmental expense to the fact the material used on dirt roads must be replaced yearly, cannot be obtained locally and must be mined and trucked some distance, consuming fuel and contributing to pollution. Also, he said, unlike paved roads, dirt roads do not qualify for state transportation aid. “It’s indisputable that paving is more cost-effective, especially now.”

Those in the audience promptly disputed that.

Betsy Calhoun, of Garrison, and DeSilva suggested that, if handled correctly, dirt roads are more economical than paved roads.