When I spoke to Tara Simmons, she had just finished leading a free 6 a.m. workout at Beacon’s Long Dock Park. The day before, she had run 20 miles.

In other words, she’s been taking it easy.

“I peaked a few weeks ago with my 50-mile run,” the Beacon resident and mother of three explains. Simmons is tapering now, winding down before 2 p.m. on Saturday, Oct. 3. That’s when she’ll run nonstop from The Egg in Albany to the Beacon riverfront, with the crosswalk that connects the Beacon Metro-North parking lot to the ferry dock acting as the finish line.

Her goal is to raise awareness of the need to protect human rights and also support the Grace Smith House, a domestic violence agency in Poughkeepsie.

You might assume Simmons loves running. You would be wrong. 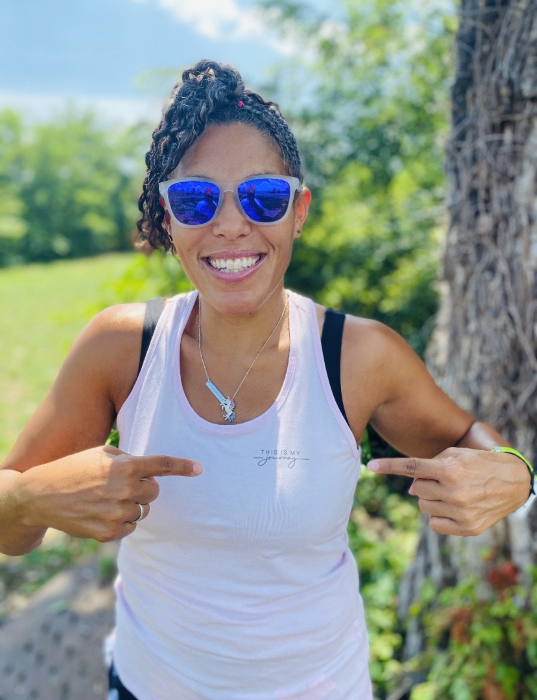 “Running’s hard,” she says with a laugh. “But I feel like it’s my calling. Throughout my life it’s always brought me this sense of peace that I don’t realize I need until I’m out for a run. It calls to me and when I’m in it, it feels so right.”

Simmons’ run next month will be her first ultramarathon, but she’s no stranger to the sport. While Simmons was growing up in Beacon, her mom would trick her and her siblings into completing errands by challenging them to see who could win a race to the store. Simmons ran cross-country in middle school and this spring was training for what she hoped would be her fastest marathon — her sixth — in Nashville.

But then, two disasters. The pandemic led to races being canceled across the country, including in Nashville. She says the other was personal and led her to the Grace Smith House.

“I needed help,” said Simmons. “Domestic violence is part of my story. Grace Smith House was there for me, and they helped me to get to where I am now.”

She was looking for ideas on how to honor the agency, when a friend asked if she had considered running cross-country — not like she did in school, but across the country. Simmons wasn’t sure she liked the idea of running 26 miles, let alone 2,600.

“But when I looked into why people run those crazy long distances, they do it for a cause,” she explains. “I realized that my whole life I’ve been training to do this.”

If all goes according to plan, in 2024, Simmons will run from Death Valley in California to Beacon. But she needs to work her way up to that. This year she will run from Albany to Beacon and next year from Niagara Falls to Beacon, and in 2022 from Florida to Beacon.

The approximate route that Simmons will run on Oct. 3 and 4, with mile markers

Simmons picked The Egg as a starting point after seeing it while accompanying her son, a high school wrestler, to Albany for a state tournament.

“It’s about what the egg symbolizes, the beginning, the start of something,” she says. She planned to finish the run atop Mount Beacon but realized that, after running 99 miles, she likely wouldn’t want to climb 1,600 feet.

Ending at the waterfront instead has another advantage: Supporters can cross the finish line with her.

Far from being on a solitary journey, Simmons will have support during the run from friends and family. She says members of the fitness club Beacon Endurance, who include quite a few 100-mile veterans, supplied valuable advice, such as the need to include a 50-mile run in her training.

It was during that run that she worked on her nutritional strategy, figuring out what to eat and drink in order to safely fuel 100 miles of running. (It’s mostly liquids and salt licks; Simmons doesn’t know exactly how often she’ll have access to restrooms.)

Her route will take her south on Route 9W, then across the Walkway Over the Hudson in Poughkeepsie to the Dutchess Rail Trail, then from Route 82 to Route 52 to Main Street in Beacon. A car with family members will shadow her with supplies. Beacon Endurance members, and some of her colleagues from the middle school in Westchester County where she teaches math, will also take turns running with her. A website at flipit4life.com will show where people can cheer as she passes.

“It doesn’t seem like much, but it means everything to hear a cowbell up those streets, or someone call your name,” Simmons says.

Once she reaches Main Street in Beacon, she and her fellow runners will carry signs displaying the 30 articles of the United Nations’ Universal Declaration of Human Rights and hand out brochures before reaching the finish line at the river in the afternoon or evening of Oct. 4, after about 24 to 30 hours of running.

Simmons doesn’t plan to time herself. “I don’t want to take away from the joy of it,” she says. “It’s more about being present in the moment, enjoying each step and being grateful that I’m able to do this.

“My confidence lies in that voice inside,” she adds. “For me, it’s God, for others it may be the universe. But I wake up every day and say, ‘How can I be helpful, how can I help somebody? Show me.’ ”

One thought on “Out There: The Long Run Home”