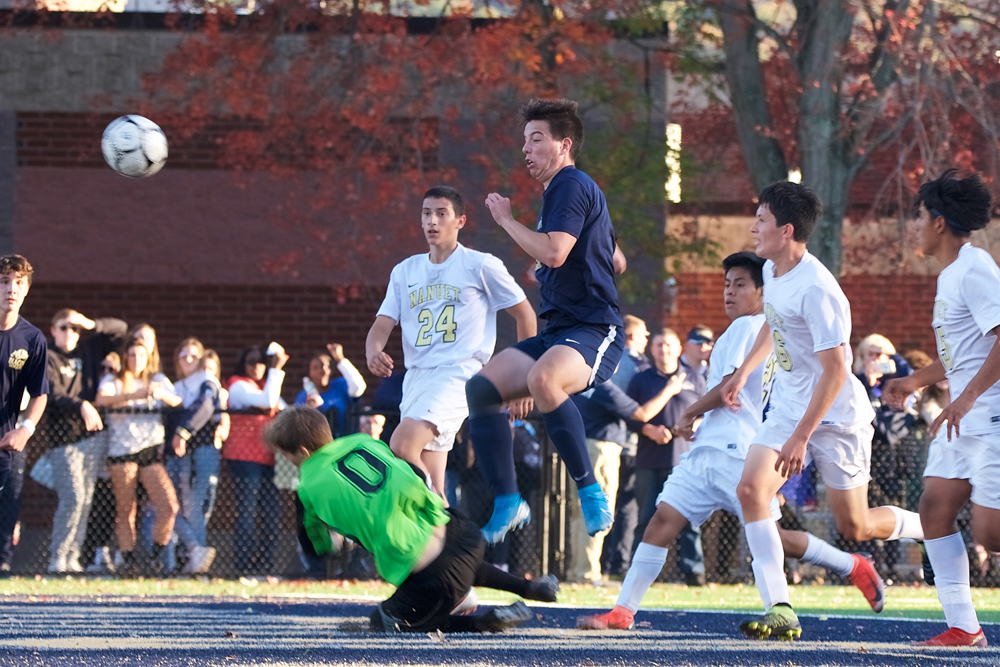 With nine returning starters — including seven who received postseason honors —the Beacon High School team is thrilled at the prospect of getting in some kind of meaningful season.

“We have a strong group back, 17 guys in total,” said Coach Craig Seaman this week. “We have several All-League-type players, so I’m optimistic that this group can compete with some of the best in the section.”

The Bulldogs last fall went 10-4-3 and advanced to the quarterfinals of the
Section 1, Class A tournament.

“Last year we were young, but now we have seven guys playing at a high level,” Seaman said. “Between the club experience and their high school experience, we have a good core.

“AJ could be one of the best goalies in the section, and we’re expecting our defense to be solid,” he added. “Banks was fantastic last year when he was healthy; he lost half of the year and still made All-Section, so he’s got all the tools.”

Seaman said his team will be taking every precaution in hopes of getting the season in without any issues.

“Obviously it’s a tenuous time,” he said. “Everyone is just wondering what it will look like, but we’re all in the same situation. On the bright side, most of my guys are returning. We have guys playing with a lot of experience, and most of them have been playing since July, so their fitness should be fine.

“I’m curious to see what the mask thing looks like, but it’s better that we’re starting in October rather than in the heat if they have to wear masks while playing.”

Beacon is in a league with Poughkeepsie, Peekskill, Hendrick Hudson and Our Lady of Lourdes. The Bulldogs have won four straight league titles.

“The hope is to get to Sept. 29 [when the state has said fall sports can begin] and be able to play,” Seaman said. “It feels a bit surreal at this point, but if we can get in a reasonable number of games and then make a playoff run, we’ll be satisfied. We feel like we’re in the top echelon of Class A teams this year.” 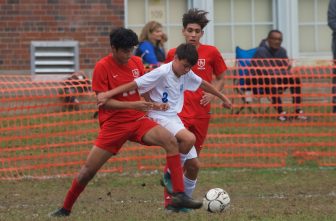 Former Haldane Coach Ahmed Dwidar will return to the school this season with the hope of taking the team to the sectional finals. Dwidar coached the team for six years, from 2010 to 2015, winning two sectional titles and a league championship.

“It feels good to be back home, where I started coaching and won a few titles with some great players,” said Dwidar, who is a 2005 graduate of Roy C. Ketcham High School in Wappingers Falls. “There are a lot of challenges, the biggest one being we have a very young team. It will be tough in the beginning.”

Dwidar takes over for Craig Canavan, whose squad finished 2-13-1 last fall. Haldane plays in a league with Putnam Valley, North Salem and Pawling.

“Frank led the team with nine goals last year, and I’m expecting him to be a leader,” Dwidar said. “He’s been in the program since the seventh grade, and he has good speed. We want all our seniors to give a good push to the underclassmen.”

“Defensively, we have to be smart, try not to allow goals early, try to keep focused,” he said.

“I think we’ll have more technical skills than last year,” he said. “In the past, we’ve had some athletes; this year I think we have some soccer players. But it will take time for the team to jell. And with the shorter season we won’t have much of a preseason, and I’m not sure if the players will come in shape. I’m hoping guys come in ready to play.”

Dwidar knows there will be challenges with COVID-19 protocols. “There are a lot of questions and challenges,” he said. “Will they be able to tolerate wearing a mask while they’re running? Most important is the safety of the players, but it can be difficult to breathe while you’re running with a mask.” 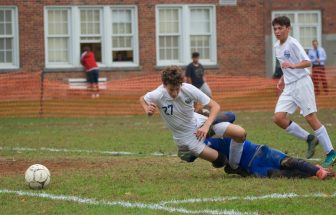 Frank Bentkowski (27), Haldane’s leading scorer, was tackled by the Hamilton keeper in a game last year, leading to a penalty kick.