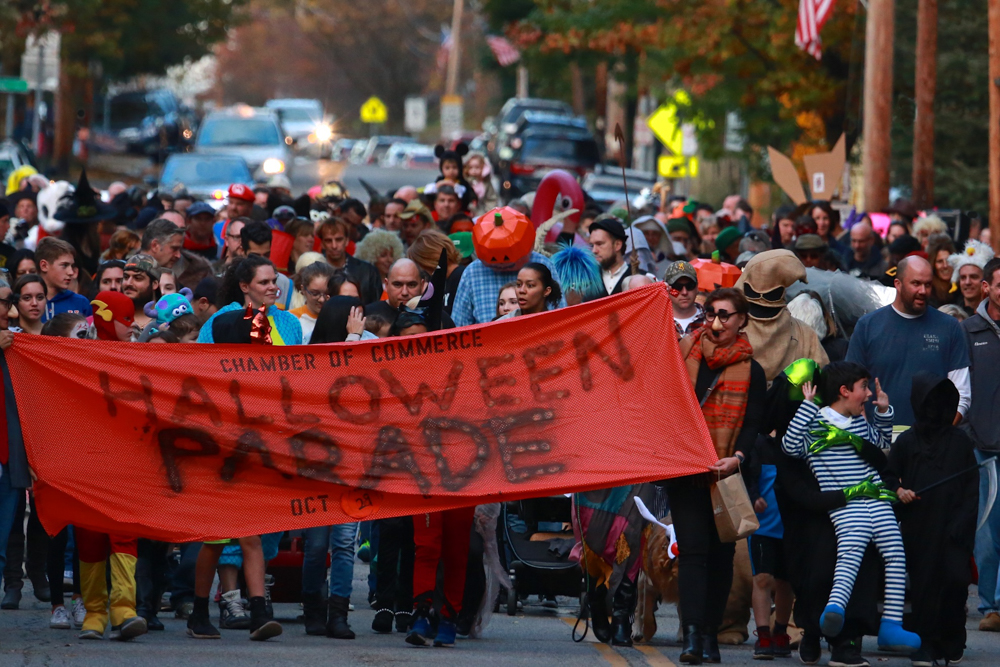 The Cold Spring Halloween parade will not take place this year, and village officials are discouraging crowds. (File photo by Ross Corsair)

Residents urged to scale back trick-or-treating

Halloween will be different in Cold Spring in 2020, thanks to COVID-19. The Village Board recently canceled the annual Halloween parade and at its Tuesday (Sept. 29) meeting considered other measures aimed at reducing crowds on the Oct. 31 holiday, which this year falls on a Saturday.

The Parrott and Parsonage Street neighborhoods, known for homeowners’ elaborate decorations, dominated the discussion. Residents there said as many as 1,000 visitors come to their doors on Halloween, many from out of town.

“I don’t think we can stop people from coming, but we should discourage people as much as we can,” Mayor Dave Merandy said. “Many people have said they will not be trick-or-treating or giving candy out.”

Merandy acknowledged that while “Halloween is another thing we are losing this year,” residents should consider not decorating or giving out candy.

Trustee Lynn Miller said some Parrott Street residents have told her they will leave their houses dark. “They respect the seriousness of coronavirus and that it is not under control yet,” she said, especially in light of recent spikes in the lower Hudson Valley (see Page 8). “We have to avoid the crowds,” she said.

Miller said in previous years there have been complaints that Halloween has been too concentrated on the Parrott-Parsonage corridor. “This is a great opportunity to spread it out and encourage people there to scale it back,” she said.

Trustee Fran Murphy suggested Parrott and Parsonage and nearby streets not be blocked off by police this year, but Deputy Mayor Marie Early said that trick-or-treaters must otherwise be made aware to stick to the sidewalks. “Not closing the street endangers people,” Early said.

Merandy said he will consult with Larry Burke, officer-in-charge of the Cold Spring Police Department, about assigning extra officers on Halloween and the use of sawhorses to block streets or other safety measures.

“Let’s try to get the word out and dissuade as many people as possible,” he said. “I personally hope people won’t go out, but I know that’s not going to happen.”

The mayor suggested residents talk to their neighbors and consider taking their children to a select number of houses that aren’t on Parrott Street.

The board supported offers from the Cold Spring Lions Club and Cold Spring Police Benevolent Association to install plaques to honor former Village Board trustee and Deputy Mayor Bruce Campbell, who died Sept. 14. The PBA plaque will be placed on a bench in front of Village Hall and the Lions Club plaque will be affixed to a bench on the riverfront.

Village residents will again be able to apply for permits to park during the winter in the municipal lot on Fair Street. Last year, 10 to 15 permits were issued using a lottery system. The $40 fee allows those selected to park in the lot from Nov. 15 to April 15.

One thought on “Can Cold Spring Stop Halloween?”