Mark Forlow, the historian for the Village of Cold Spring and the Town of Philipstown, owns a collection of more than 1,000 historic local postcards. We asked him to select a few of his favorite Philipstown landmarks that are no more. His comments appear with each image.

This church stood where the Butterfield library is now. In fact, the library was built on its foundation. Philipstown had a lot of churches. The old Methodist church was the building that now has C&E Paint. The tower is gone. But that’s why it’s called Church Street. 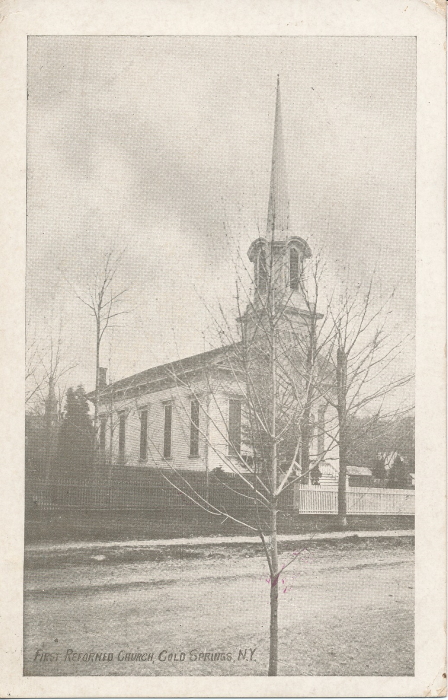 Another lost church. This stood near the intersection of Route 9 and Fishkill Road. The steeple was taken down after it was hit by lightning. Later, the church became a private home. Then, in 2006, the building was demolished to make way for a connector between Fishkill Road and Route 9. The dirt road in the foreground was Fishkill. 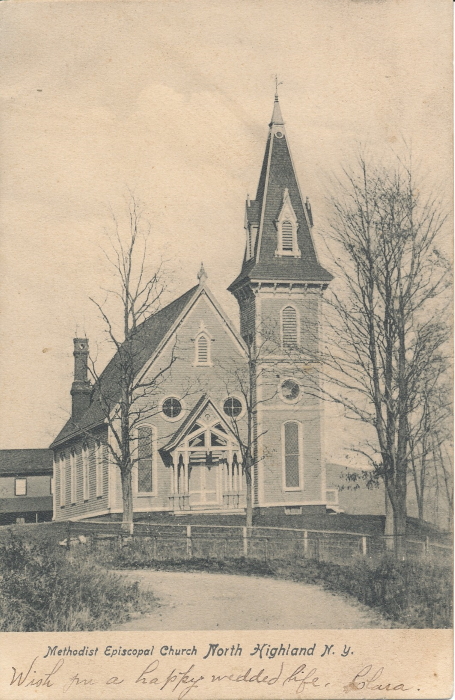 This is a view of the hospital, which was later torn down, looking northwest. The site is now the Butterfield development. 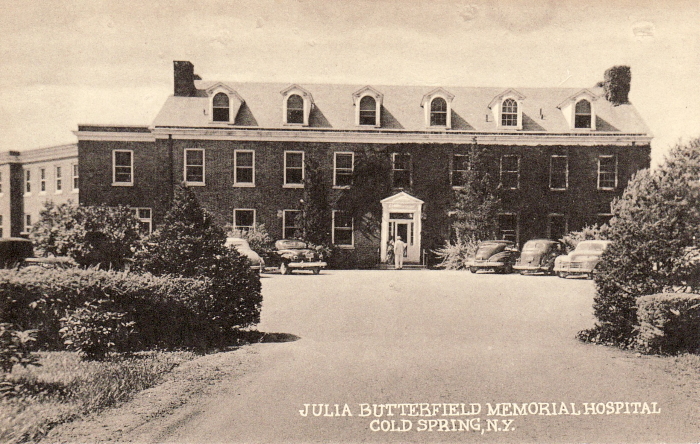 Julia James was left this country estate, along with $500,000 and a home at 400 Fifth Ave., in New York City, when her husband, Frederick, died. She later married Gen. Daniel Butterfield. Built in 1852, the house was located where Haldane High School now stands. The street leading to the school is called Craigside, but that’s a misspelling. It got its name because it was located near a large rocky crag. 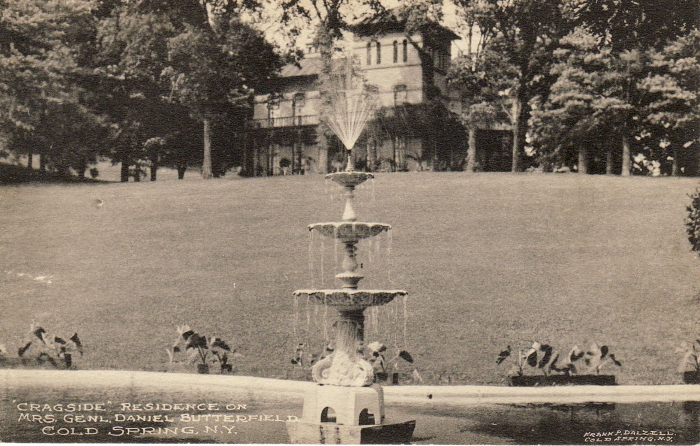 This was a grand vacation hotel in Garrison; I’m told it would have been in the vicinity of the current Garrison School. [Ads promoting the hotel appeared in Brooklyn newspapers between 1906 and 1913.] 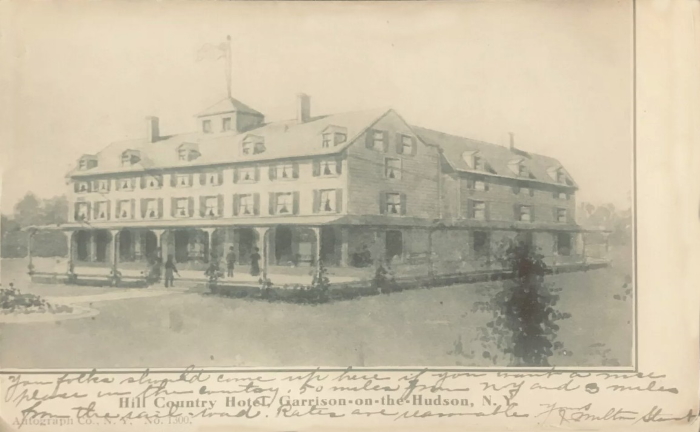 Before Route 9D went north to Beacon, Cold Spring had Main Street going east and west, Chestnut Street going south and Morris Avenue going north. Morris ended about where Route 9D now starts to go downhill. At the end of the avenue was this country home, which was owned by George Pope Morris [1802-1864], a co-founder of the New York Evening Mirror. His claim to fame is the poem, “Woodman, Spare That Tree!” 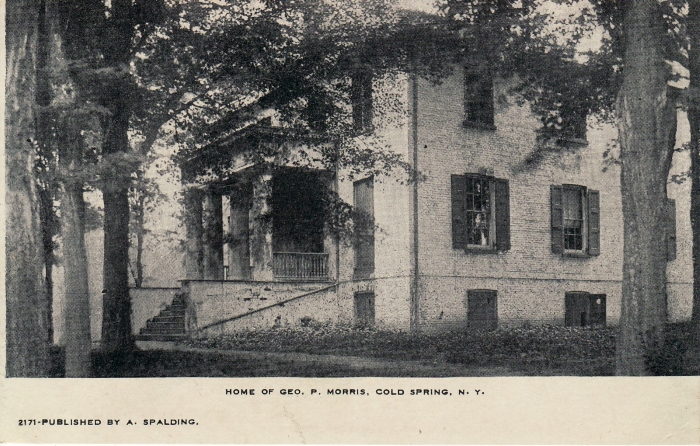 This building was on the site of the Tots Park. It was built in the 1890s and taken down in the 1950s. The Lyons family found a film of it being demolished that is posted on YouTube [below], and it’s heartbreaking, especially when the crane knocks off that beautiful peak. I’ve heard from old-timers that they used to slide down the fire escape in the back of the building like a huge slide. I also have photos of classes posing under the front archway. This was one of the ferries that ran between West Point and Garrison. There was another called The Garrison and one called The West Point. Until the Bear Mountain Bridge was built in 1925, this was the only way across. The nearest ferry north traveled between Fishkill Landing [now Beacon] and Newburgh. 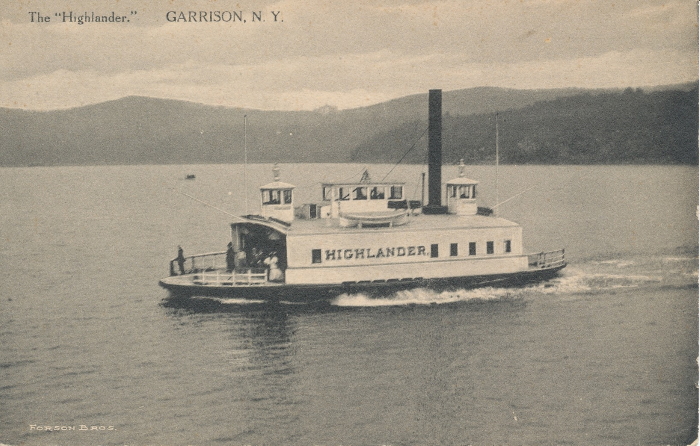 This is an example of a passenger boat that would have stopped at Cold Spring in the 19th century. The Mary Powell was one of the faster and more beautiful boats. After Gen. George Custer’s body was brought east a year after his death at Little Big Horn, the Mary Powell carried it from Poughkeepsie to West Point for burial. 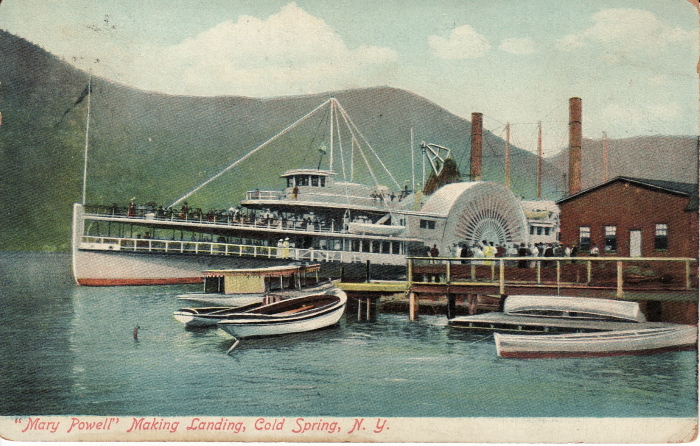 This hotel was on Division Street and owned by Harry Caskey of Nelsonville. It burned down in 1914. 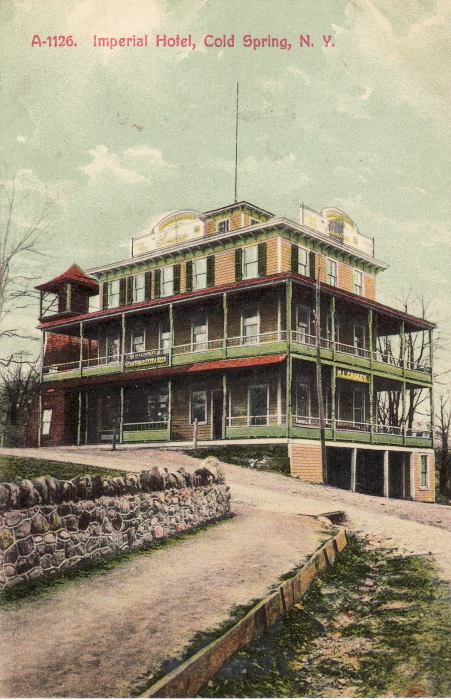 This was a postcard advertising the garage in Nelsonville. You can see all its affiliations: Chevrolet, Buick, AAA, Sunoco. This Italianite home was situated on the east side of the railroad tracks on the bluff above what is now the Depot Restaurant. It was owned by Gen. John E. Campbell [1821-1905] and later his widow. 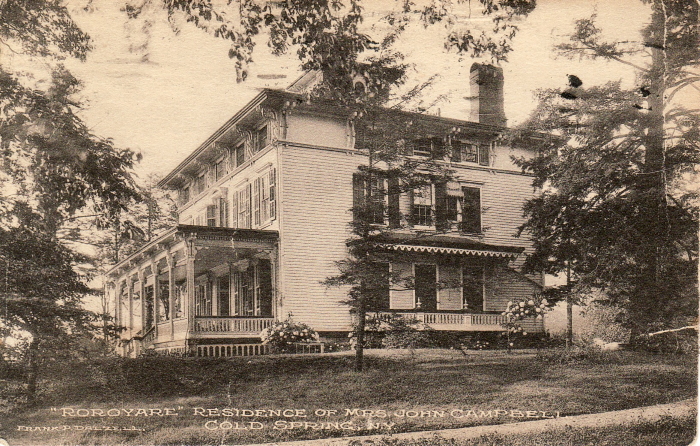 The house, which stood on Route 9D in Garrison, was the headquarters during the Revolutionary War of Gen. Benedict Arnold, and it was from this house that he fled to the river after realizing that he was about to be revealed as a traitor. It burned down in 1892.