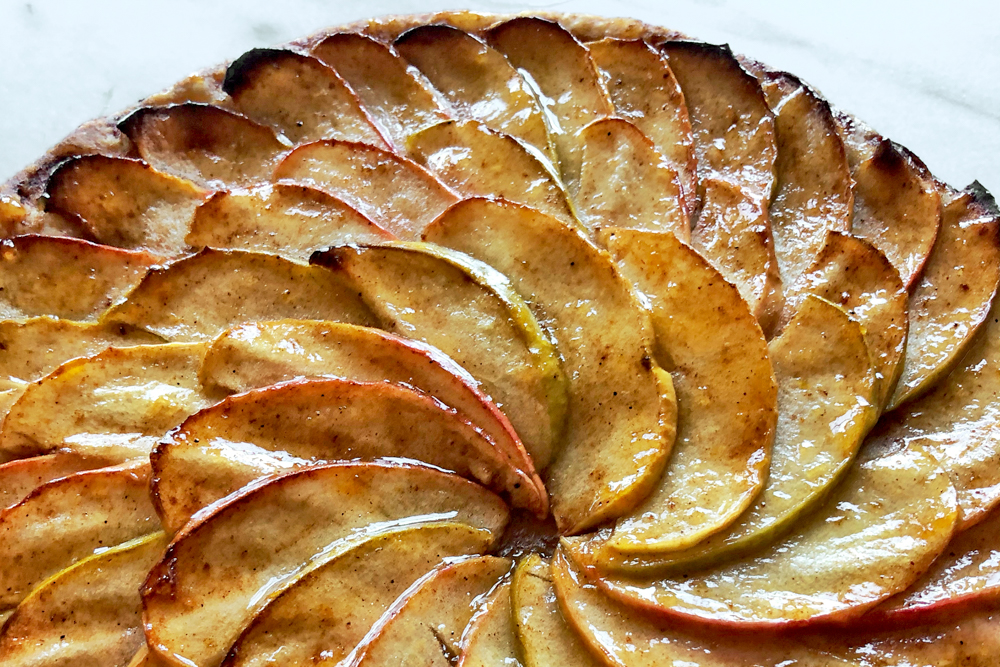 “As American as apple pie.”

You’ve heard that a million times but probably never considered that the only apple native to the New World is the crabapple. Although it puts on a great show in the spring, by the fall it is small, hard and bitter — “crabby” — and would make a lousy pie.

Instead, for a classic American apple pie, we have to rely on the malus domestica, which has been carefully refined, grafted and tended throughout Asia, the Middle East and Europe for more than 10,000 years.

The roots of pie itself can be traced to the ancient Greeks: crusts of flour and water filled with primarily meat or seafood were among the first “cooked” foods. Enclosed in these crusty lids, fillings stayed fresh longer in the winter. Spices such as cinnamon and nutmeg covered any “off” flavors. But these crusts were barely palatable, functioning mainly as storage and transport containers. British meat pies made their way with the settlers across the Atlantic but it wasn’t until 1800 or so that sweet pies began to appear in the U.S.

Pâte brisée is its most basic form — from flour, water, salt and butter — and the basis for a classic French tarte fine aux pommes. A thin disk of pastry becomes a bed for apples, sliced thin, buttered, baked and finished with a fruit glaze. (David Lebovitz recently published a version on his blog.)

Apple pie it’s not. Apple pie is best exemplified by Melissa Roberts-Matar’s Gourmet recipe that calls for a filling of tart and sweet apple varieties sugared and spiced with cinnamon, allspice and a hint of lemon.

The recipe here is an attempt to marry the two: the simplicity of the preparation and presentation of the tarte aux pommes augmented by the sugar and fragrant holiday spice of good old American pie.

Needless to say, enjoyed with a cup of coffee or tea, this hybrid is more than sufficient to brighten a cold winter day. Likewise, a slice topped by a scoop of vanilla ice cream is just desserts for a festive dinner.

1. For the pastry: Mix flour and salt in a bowl; add cubed butter and mix quickly with a pastry blender/cutter (or your hands) until butter in just slightly smaller pieces. Add water and knead until dough forms a mass. Pat out into a rough rectangle on a lightly floured surface. With a rolling pin, roll dough into a rough rectangle, about 5-by-10 inches. Fold dough over itself in thirds (one-third folded over the center, then the other). This is referred to as a “turn.” Repeat the process (rolling out and folding the dough as you just did) for four turns and wrap in plastic. Chill in refrigerator for at least two hours. Remove dough and perform two more turns. Wrap and chill again for another hour. (Make the dough up to this point no more than two days ahead, or freeze for up three months.)

2. For the tart: Line a baking sheet with parchment paper. On a floured surface, roll pastry into an about 14-inch circle. Using a plate, tart ring or cake pan as a guide, trim dough with a knife to a 12-inch circle. Fold the circle in half (to make it easier to handle) and transfer it to the baking sheet. Unfold it and refrigerate while you prepare the apples.

3. Preheat oven to 400 degrees. In a small bowl, mix sugar, lemon zest, cinnamon, allspice and salt. In a large bowl, gently toss the apple slices (be careful not to break them), with the lemon juice and about 1½ tablespoons of sugar and spice mixture. Remove dough from refrigerator. Lightly brush surface with the melted butter and dust lightly with more of the sugar and spice mixture. Starting about ¼-inch from the outer edge of the circle, tightly overlap apple slices in a circle around the pastry. Repeat making two more overlapping concentric circles to cover the pastry dough surface. Lightly dust again with sugar and spice mix. (You should have some leftover — save it for cinnamon toast.) Bake until crust is golden-brown, about 35 to 40 minutes. Cool slightly and brush with glaze.