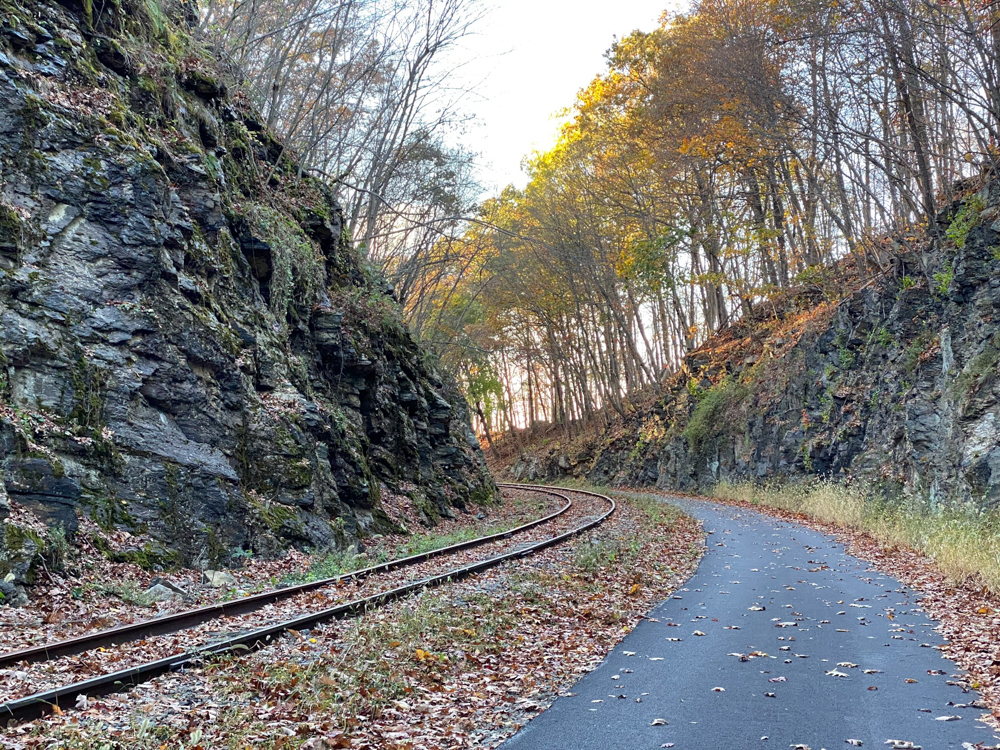 After years of effort, 750-mile Empire State Trail is complete

The next time you go to the southern end of the Dutchess Rail Trail in Hopewell Junction for a run or bike ride, try something different: Go right.

The trail once extended a few more hundred feet before hitting a fence. Now you’ll find an opening in the fence, and the trail continuing. Eighty-nine miles later, you will reach the southern tip of Manhattan.

Not in the mood? Go left — as usual — up the Dutchess Rail Trail, across the Walkway Over the Hudson and 112 miles until you hit Albany. From there, you can go north to Canada or head west to Buffalo. 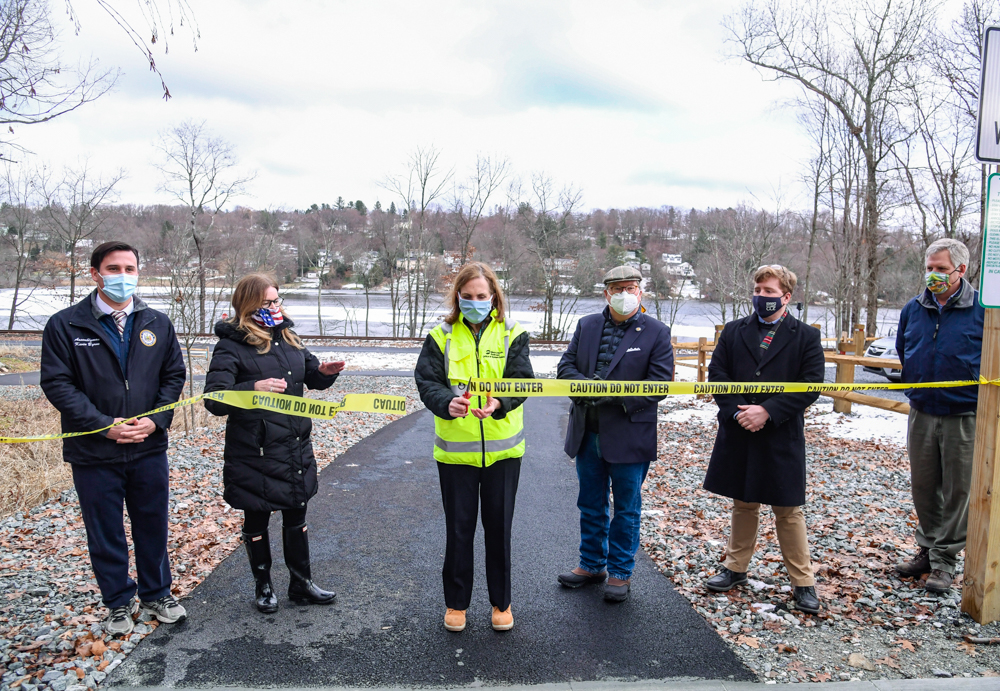 Catherine Rinaldi, the president of Metro-North, cuts the ribbon on Jan. 4 to officially open the Maybrook Trail. Putnam County Executive MaryEllen Odell is to her left. (MTA Photo)

This is the newly opened, 750-mile-long Empire State Trail, the longest multi-use state trail in the country. Its creation was announced by Gov. Andrew Cuomo in 2017, who promised it would open “before 2021.”

It hit that deadline, to the day, on Dec. 31, although not all the signage is complete. On Tuesday (Jan. 5), I ran into a sign — literally, like, I hit it — on Pumphouse Road in Brewster that said the next section of the trail was not yet complete. When I later contacted Andy Beers, the director of the Empire State Trail, he assured me that the trail is in fact open, and that I hadn’t been trespassing. 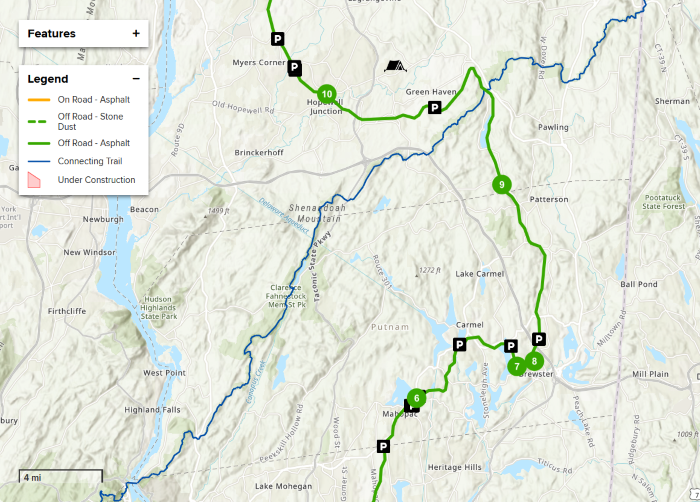 Detail from a map of the Empire State Trail

I have since completed the entire 24-mile Maybrook Trailway section of the Empire State Trail, which runs north from Brewster to the southern end of the Dutchess Rail Trail in Hopewell Junction, passing through Southeast, Patterson, Pawling, Beekman and East Fishkill.

South of Brewster, the trail connects after an on-road section to the Putnam Trail in Mahopac, which connects with Westchester County’s North County Trail. The Maybrook trail can be accessed at Metro-North stations in Poughkeepsie or Brewster, or from parking areas along the route. (See empiretrail.ny.gov.)

About 400 miles of the 750-mile trail consists of previously constructed trails, such as the Dutchess Rail Trail and the Erie Canalway Trail, with the remainder new trails that link them together and show off the diversity of landscapes and historical sites throughout the state, Beers said. 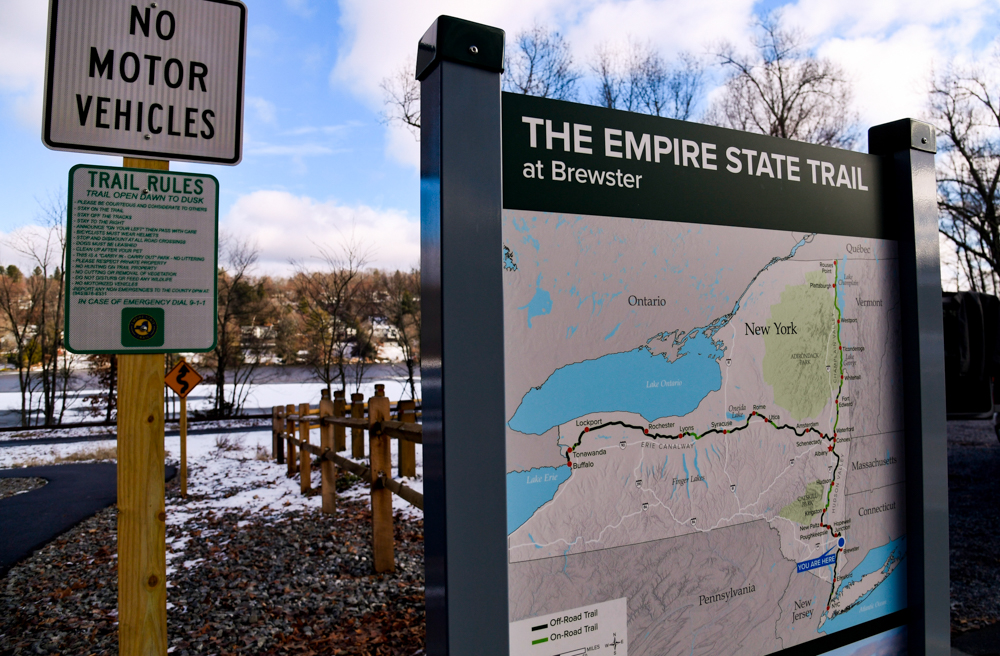 A sign in Brewster shows the entire trail. (MTA photo)

Some of the linkages involved minor projects — in length, not logistics — such as creating a few miles of trail or marking segments along roadways. “Those gaps existed because they were the hardest sections to complete due to engineering challenges or real estate” ownership, said Beers.

Others involved the creation of longer trails, such as the 36-mile-long Albany-Hudson Electric Trail, and the Maybrook Trail, which Beers said is one of his favorite parts of the project.

It’s named for the Maybrook Railroad Co., which operated the double Beacon Line from Maybrook in Orange County, across what is now the Walkway Over the Hudson, and into New England. The line stopped operating in the 1970s.

Because the tracks are owned by Metro-North, the agency built the Maybrook Trail with $42 million in state money. The agency left one of the two tracks in place “so you get the feel that this was a historic rail bed,” Beers said. “It goes past these beautiful, fairly wooded and remote landscapes.”

It also intersects with the Appalachian Trail, so if running to New York City doesn’t seem like enough of an adventure, you can head to Maine or Georgia. 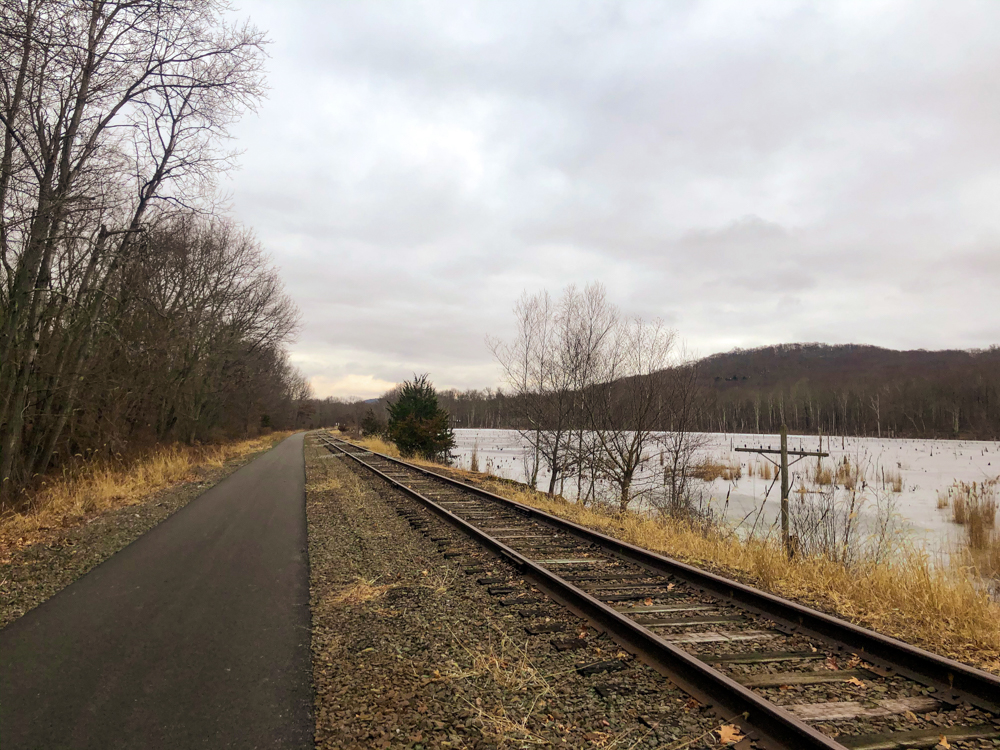 Along the Maybrook Trailway (Photo by B. Cronin)

After running the Maybrook Trail (it’s also open to cross-county skiers and snowshoers), I can vouch for its beauty, especially the southern section. After passing the Appalachian Trail intersection, the trail winds past several scenic lakes and through The Great Swamp. Informational kiosks along the way reveal the surprising history of many of the sites, including a summer camp for New York City Sanitation Department workers that once featured discarded train cars remodeled into vacation cabins, and how Tonetta Lake in Putnam County was named for a married slave couple, Tone and Etta, who were freed after Tone fought in the Revolutionary War. 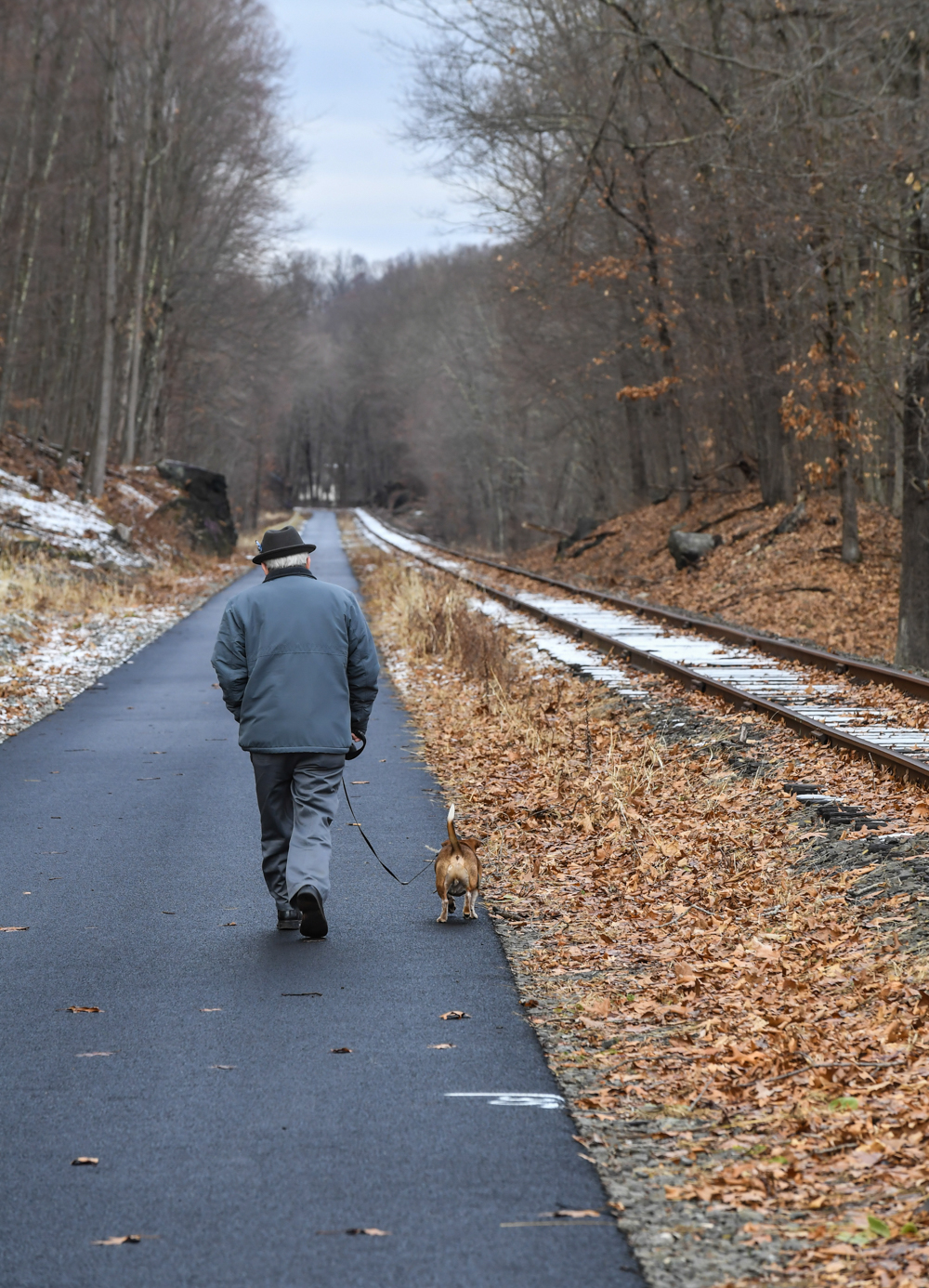 On the Maybrook Trail (MTA photo)

It’s certainly more calming than the northern section of the Maybrook Trail, which features tall fencing and security cameras as it passes through an MTA Police Department Canine Training Center, past the Greenhaven Correctional Facility, past the Greenhaven Correctional Facility cemetery in which most of the gravestones have numbers instead of names, and past several signs warning that if you venture off the trail you’ll find yourself in a “firearms discharge area.” But your mileage may vary.

Security cameras aside, the Maybrook section is paved and off-road, unlike other sections of the trail which are along roads and best experienced by cyclists as opposed to those on foot. But, as Beers pointed out, it’s now possible to ride a bike from Kingston to the Battery in Manhattan and traverse only 4 miles of road.

At around 130 miles, a Kingston-to-New York City ride would make for a fun long weekend trip. And it’s hard not to imagine an ultramarathon starting at the Walkway Over the Hudson and ending 100 miles later in Manhattan.

The trail is also a godsend to people looking to safely get out of the house during the pandemic for some gentle exercise. The state saw a surge of use on sections of the Empire State Trail as they opened and Beers said he hoped the trail would remain popular now that it’s whole.

The Empire State Trail includes many well-known trails, such as the Dutchess Rail Trail and the Hudson Valley Rail Trail, but other new paths have opened recently or are coming soon.


A new section of this Dutchess County trail, from Millerton to Ancram, opened last month to create 24 miles of continuous paved trail that starts in Wassaic. When completed, the trail will be 46 miles long and end in Chatham.


Construction on the Cold Spring-to-Beacon trail is expected to begin this year.

This time-lapse video of a ride along the Maybrook Trail was created by the MTA.

One thought on “Out There: A New York State of Trail”