Accused of assaulting officers at Capitol during riot

FBI agents on Saturday (Jan. 16) arrested a Newburgh man whom they say participated in the storming of the Capitol on Jan. 6 and assaulted police officers.

Edward Jacob “Jake” Lang, 25, was detained at his home and charged with assaulting officers, civil disorder and violent entry. Four days earlier, a Beacon man, William Pepe, had been arrested and charged with unlawful entry after being photographed in the Rotunda of the building. 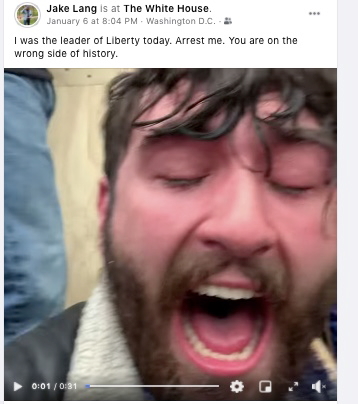 A screen shot from a video posted by Lang.

Agents over the past two weeks in New York also have arrested residents of New York City, Long Island, Cheektowaga (near Buffalo), Rochester, Syracuse, Utica and Round Lake (Saratoga County). One hundred and seventeen people from 35 states and D.C. had been arrested by the FBI as of Jan. 20, according to a tally by the Program on Extremism at George Washington University.

According to a criminal complaint filed in the U.S. District Court for the District of Columbia, Lang posted photos and videos on social media documenting his participation in the riot. One video shows Lang striking officers’ shields with a bat, the FBI said.

Lang allegedly added a cartoon finger pointing to a figure repeatedly banging a police shield with the caption, “This is me.” The FBI said Lang could be seen in the crowd wearing a black leather jacket and green-and-black gas mask.

On Jan. 7, the day after the riot, Lang posted to Twitter, according to the charging documents: “I watched a woman die yesterday in front of my eyes. I saved two others from being trampled and suffocated by Capitol Police. They murdered her and tried to murder many, many more. This is an act of war by TYRANTS against the American people.” 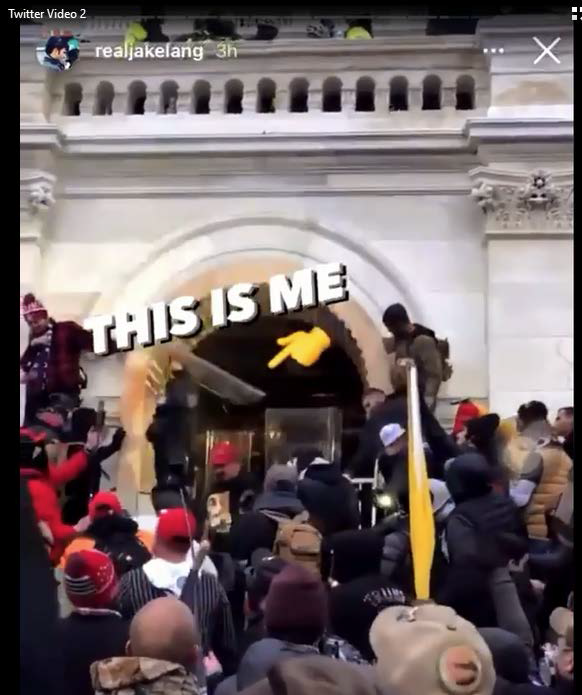 Lang allegedly added a cartoon hand and “This is Me” to a video posted online.

In the charging document, the FBI said Lang was asked by a user on Instagram what would happen next and replied: “Guns…. That’s it. One word. The First Amendment didn’t work, we pull out the second.”

On Jan. 14, two days before his arrest, Lang allegedly said in a video on Instagram: “I want to use this time to say thank you for all the people who have been reaching out, calling me a patriot… Been really amazing to have this impact on the community, going to keep on fighting for you guys, we got some big things planned.”

The Sullivan Times reported on Jan. 12 that Lang grew up in Narrowsburg, a hamlet in Sullivan County with a population of about 430 people, and that a Facebook page belonging to his mother includes many “Stop the Steal” posts. The paper reported on Jan. 19 that Lang was being represented by a New York City defense attorney but had not yet appeared in court. He was expected to have a preliminary hearing in federal court in White Plains.