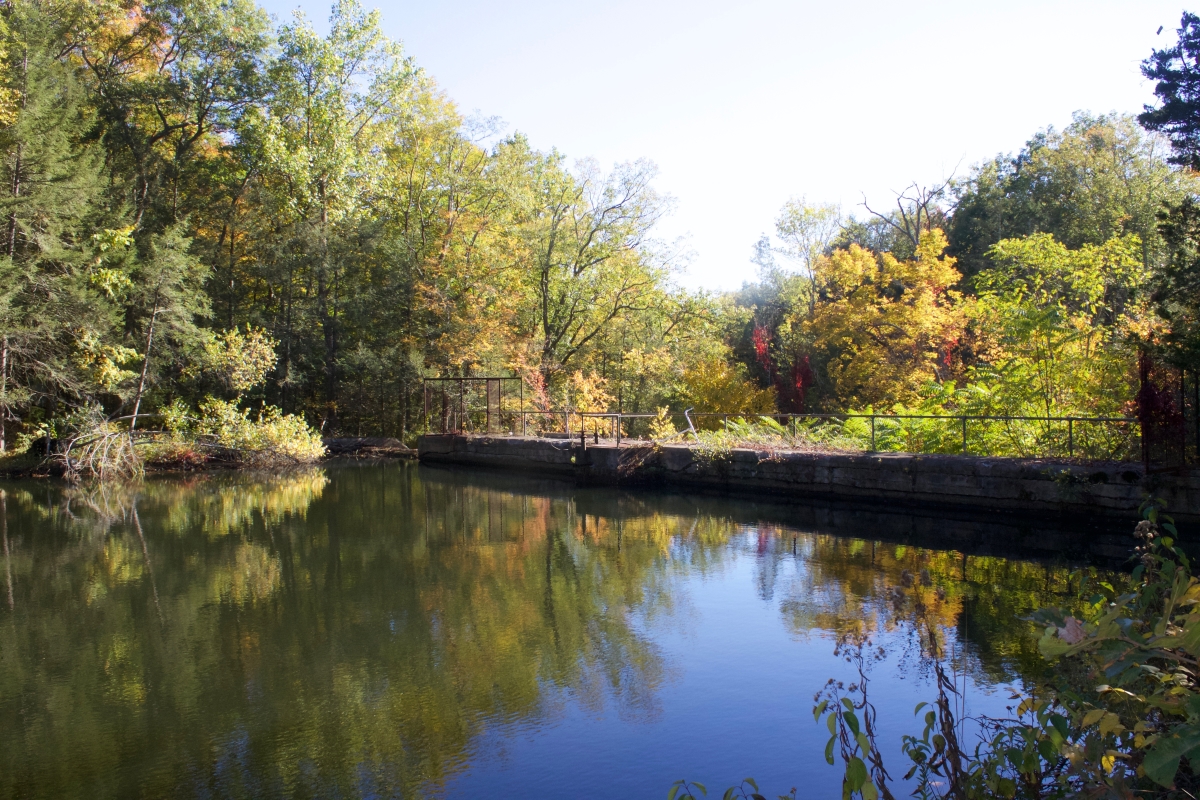 Part of the reservoir at the Cold Spring water system plant on Fishkill Road. (Photo by Kevin E. Foley)

The Village of Cold Spring is taking a closer look at options for enhancing its water supply, including measures that could offer major cost savings.

At the Tuesday (Feb. 2) meeting of the Village Board, Chazen Engineering Consultants presented cost estimates for various options detailed in a report produced for the Hudson Highlands Land Trust and presented to the board in October.

The examination of how Cold Spring gets its water is being driven in part by repairs that need to be made to the village reservoir dams. An analysis in 2010 judged the upper reservoir dam off Lake Surprise Road to be “unsound,” and the lower reservoir dam and the Foundry Brook dam at the treatment plant on Fishkill Road to be “inadequately maintained.”

The Chazen report estimated repairs to the dams would cost between $6 million and $8 million but suggested it could be far less expensive if wells were drilled to enhance or replace the reservoir system. The report noted that “water well fields are frequently placed in service for $1.5 million or less.”

George Cronk, an engineer with Chazen, and Russell Urban-Mead, a hydrogeologist, told the board that wells can tap into either bedrock or sand-and-gravel. The latter generally yield larger volumes and higher-quality water.

Urban-Mead said bedrock wells could be drilled on the bottom of the upper reservoir if it is “decommissioned,” or drained. Other possible bedrock locations include Foundry Brook, the water treatment plant and lands close to the upper and lower reservoirs.

The Clove Creek aquifer, which lies beneath the creek and parallels Route 9, already provides well water to three municipalities.

If wells are used, the cost of a system to transport the water to the village distribution network also would have to be considered, the report stated.

Establishing a well field in the Clove Creek aquifer would likely require an expanded water district to include the Town of Philipstown, something Cold Spring Mayor Dave Merandy questioned. “I don’t see why Philipstown would get involved,” he said. “I don’t know who they would want to service” by tapping into the aqueduct.

Cronk said the Putnam County Economic Development Commission has advocated further development along the Route 9 corridor in Philipstown to bolster the tax base but the “No. 1 hang up” has been the lack of water and sewer service.

Michelle Smith, the executive director of the Hudson Highlands Land Trust, noted that Philipstown should consider that Beacon, Fishkill and East Fishkill already draw water from that aquifer and that if the town “doesn’t make a move within a certain amount of time, they may never be able to access the aquifer because it’s in such demand from the highly developing cities and towns around it.”

Urban-Mead said that intermunicipal projects such as an expanded water district including Cold Spring and Philipstown could be eligible for grants and that the larger user base would improve cost sharing.

Merandy remained dubious but said he would speak with Philipstown Supervisor Richard Shea to explore the town’s interest in an expanded water district, including use of the Clove Creek aquifer.

The Chazen report also recommended adding “flashboards,” or wooden structures, to increase the height of reservoir dams. Flashboards would cost about $150,000 and could increase capacity by more than 13 million gallons.

In addition, the report suggested diverting the Jaycox Pond stream into the Cold Spring water system, a move that would increase water supply in the fall, winter and spring. The diversion would require state approval. No cost estimate was provided.

“The upper dam is definitely in need of serious repair,” said Matt Kroog, the village’s superintendent of water and wastewater. “If it’s significantly cheaper to decommission it and put flashboards on the lower reservoir and Foundry Brook dams, and if it’s feasible to supplement the system with Jaycox Pond and a couple of wells, that would probably be the cheapest and fastest way to go.”

While the board is considering the best way to get water to the village, the antiquated distribution system, with pipes dating back 100 years or more, can create costly problems for residents.

At Tuesday’s meeting, three residents expressed concern about the cost of repairing leaks.

Village Code specifies that Cold Spring is responsible for leaks in the main water line, while homeowners must pick up the cost of fixing leaks in the service line from the main line to the house.

Repairs involving a private contractor can cost from $5,000 to $10,000. Excavation is a major part of the expense, including labor and the use of heavy equipment.

Tom Stephens, who lives on Morris Avenue, has an even costlier dilemma. On Tuesday, he told the board he is facing a bill of $20,000 — “money I don’t have” — for a yet-to-be-completed repair.

Stephens said his situation is made worse because Morris Avenue is part of Route 9D, a state highway, and the Department of Transportation will not allow him to excavate part of the pavement until spring. Because of traffic volumes, there will be an added cost of flagmen, a factor that Stephens said makes contractors reluctant to take on the work.

Failed attempts to locate the curb cock have also hampered Stephens’ ability to fix the leak.

They cited issues such as difficulty finding a contractor, especially in an emergency situation in the winter, wildly varying cost estimates and a lack of adequate insurance coverage.

“I don’t have an answer for you tonight; I wish you guys didn’t have to pay that much,” Merandy said, adding that he will speak with local contractors. He also said he would consult with the trustees about possible cost-sharing ideas.

“People often have complaints but don’t say anything,” Merandy said. “I appreciate you bringing it up; I will definitely follow up.”