Dutchess County will not receive redistricting data from the 2020 census until the fall, delaying efforts by a newly created seven-member commission to redraw legislative boundaries based on population changes.

The delay will likely push into 2022 the work of the Independent Reapportionment Commission, which won unanimous approval of the county’s 25-member Legislature and was approved by 65 percent of county voters in November. 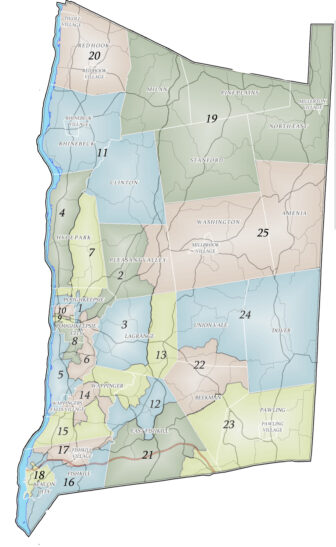 Dutchess County has 25 legislative districts, but their boundaries — and number — could change.

The census data, which includes block-level population counts by race and ethnicity, will be released by Sept. 30, the U.S. Census Bureau said on Feb. 12. The bureau planned to deliver the data by March 31 but said the COVID-19 shutdown slowed down collection and processing.

The Legislature’s Republicans selected Dale Culver of Amenia and Keri Peterson of Hopewell Junction to the commission, while Democrats chose Richard Keller-Coffey of Millbrook and John Pelosi of Red Hook. Those four appointees then named Hance Huston of Fishkill, Whitney Lundy of Hyde Park and Christie VanHorne of Poughkeepsie as the remaining three members.

While the commission members are in place, they can do “nothing” without the census data, said Legislature Chair Gregg Pulver. By law the commission’s redrawn districts must be ready for elections in 2023.

“We have plenty of time; they’ll certainly have an opportunity to work as long as they need,” Pulver said on Wednesday (Feb. 17).

Pulver said he does not expect the new map to differ much from the current one, but he also announced during the Legislature’s first meeting of the year in January that he wanted the body to explore the idea of reducing the size of the Legislature to make it more “efficient” and save costs. Each legislator is paid $16,400; the majority and minority leaders earn $25,133 and the chair $34,967.

Because of social media, legislators are “adept at reaching out” and “having a few more people isn’t going to be an issue,” said Pulver. But Nick Page, a Democrat whose district includes Beacon Wards 1, 2 and part of 3, said he worried that having legislators represent more constituents “simply stretches us thin” and that a smaller body could affect “denser districts that are Democrat-held.”

“We don’t want to see them subject to less-robust representation,” said Page.

The Legislature established the commission as part of a package of reforms that included term limits and a new ethics law. The law stipulates that none of its members can be former elected or political party officials unless they have been out of office for at least three years. The same restriction applies to state and municipal employees.

The commission is also required to hold open meetings, post minutes within five days after each meeting, hold at least two public hearings and allow county residents to comment on the revised district map.

The map is required to be “contiguous” and “uninterrupted,” not favor either party and have roughly the same number of residents, which is currently around 12,000 people based on the county’s population of about 300,000. The commission must adopt the new districts by a least a 5-2 vote, and the Legislature must approve the proposal before submitting it to the county Board of Elections.

While the Board of Elections can make “minor technical adjustments,” the new boundaries would “have the force and effect of law.”