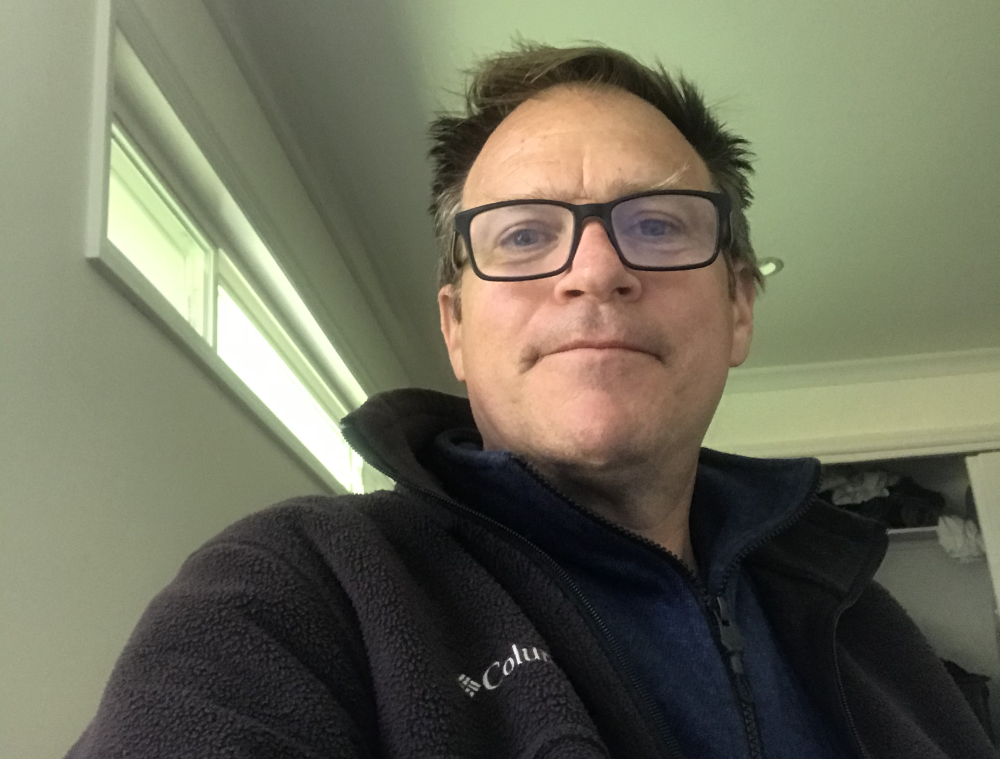 James Hoch, who has been a professor of creative writing at Ramapo College since 2006, will publish his third collection of poetry, Last Pawn Shop in New Jersey, next year. With National Poetry Month upon us, the Garrison resident spoke with Chip Rowe about his work and teaching.

When did you think, “Poetry is what I want to do”?
The first time I read a poem aloud to a group. It was at the bar in Philadelphia. I had been to so many punk shows where they had sign-up sheets to get on the mailing list, I just signed up but didn’t realize it was for an open mic. The organizer says, “And now here’s James Hoch” and he read off my entire address, including the ZIP code. I was 19, so I carried around a few of my poems so if I got hit by a train, the great work of James Hoch would survive. As I read this poem about a jazz trio I saw at a bar in South Philly, I felt this overwhelming emotion. A friend later asked me, “What are you going to do with your life?” And I said, “I think I’m going to be a poet.” And he said, “I can see that.” I realized I should study people like this Shakespeare guy who know how to do it [laughs]. I had a naivete, a delusion, but nobody checked it. Today I think social media would shame you and keep that from happening.

Prayer for That Little Exhaustion of Light

There ought to be a prayer
for that little exhaustion of light
where bullets worm clear through
apples clinging to limbs.
There ought to be a prayer
for flesh they pass through,
space left, bits blown into grass,
that they resemble teeth,
and the grass taking teeth.
Look how sky eats report,
how skins of trees drink sound.
Prayer for saplings lined in rows,
winters we burlapped young trunks,
fed shovels of shit and ash.
The prayer ought to feel like hours
with the assassin of our orchard,
whose eyes are cold rain,
whose heart is cistern,
who has no use for prayer.
We know because we made him.
Because we made him, he is alive.
Who could blame us for wanting
a gauze to pack holes,
a god to backfill with breath?
Now, a table in the mutilated orchard,
let us bow our heads over cider.
The prayer should be brief,
the way brief blows itself out.
The prayer will fail, always
between what language says
and does. Where prayer fails,
now mouths full of autumn,
now the leaf fury reddens.
Yes, we are scared. Yes, we tire
being afraid, pleading now
in that light, that damn light.


How do you teach poetry?
I try to find for each student a poem similar to what they’ve been trying to write, or a poem that is in conversation with a poem they are writing. Maybe it’s the voice, content, form, tone. I’m like a poetry matchmaker: Give me a reader of poems, and I will find a poet or poem that’s going to make them lovers of poetry. I try to get students closer to speech, which gets them closer to their inner lives, and to saying real things. I’ve read a lot of beautiful poems, and I’ve been to a lot of bad poetry readings. When a poem is read well, whether the poem is great or not, you feel that presence.

So you should write assuming the poem will be read aloud?
Yes. Poetry is speech. The disruptions and oddities of speech are a distraction in writing but become pleasures and engagements in poetry. We don’t know what Shakespeare’s voice sounded like. We only know how it sounds when we say the words. So if you don’t own the language — actors know this — it fails.

How do you start a poem? Staring at a blank page?
I am so old I’ve done it any number of ways. I went for walks by the river. I’ve fallen into the river. I’ve started with snippets. I’ve had poems appear out of nowhere; the first poem I sold for any bit of money was done in 20 minutes. But I’ve also taken 10 years to write a poem. I don’t know.

In the end you have to go home.
You have to leave the hospital room

where you stand bedside, though
there’s no bed anymore, which

an hour ago was hers. In the end
nothing belonging to no body,

hers no longer hers, you must head
down the ramp, through the sliding

glass doors and cheap fluorescence
of a gray garage, and find the car

she parked somewhere weeks ago.
Which level? Which space?

You ask someone in scrubs for help,
and she can see you are not right

and gentle with your notrightness.
You are saying nothing new.

You are a son; your mother has died.
All you need to do is find the car.

But you can’t even, and break again–
It will be this way awhile:

stubborn in the leather, you tell yourself
your body needs to be yours again–

Then relief, guilt, a profusion.
But all that’s fiction,

a person you have yet to be.
Right now, grief is simple: Find the car,

let the engine run some, take care
not to damage anything on the way out.

Where did the title of your next collection come from?
I’ve been thinking about identity. If you could walk into my life or walk into me, it’d be like, there’s that lamp from 1976. I’m more of a collection of experiences and things than I am a self-governing entity, let’s put it that way. I don’t feel like I’m in charge of anything. Maybe it’s being a parent, where these characters are walking in and out of your life. It’s part of my job as a parent to provide a stage for these creatures to live in. It’s the self as a place as opposed to a thing occupying space.

Are there common themes in your work?
I get into ruts where I get fixated on a few tensions. I’ll write different types of poems about different experiences, with different conceits and openings, but when I go to compile a book, it’s like, “This is one poem.” Richard Hugo said, “Your obsessions lead you to your vocabulary.”

One thought on “The Poet Next Door: James Hoch”