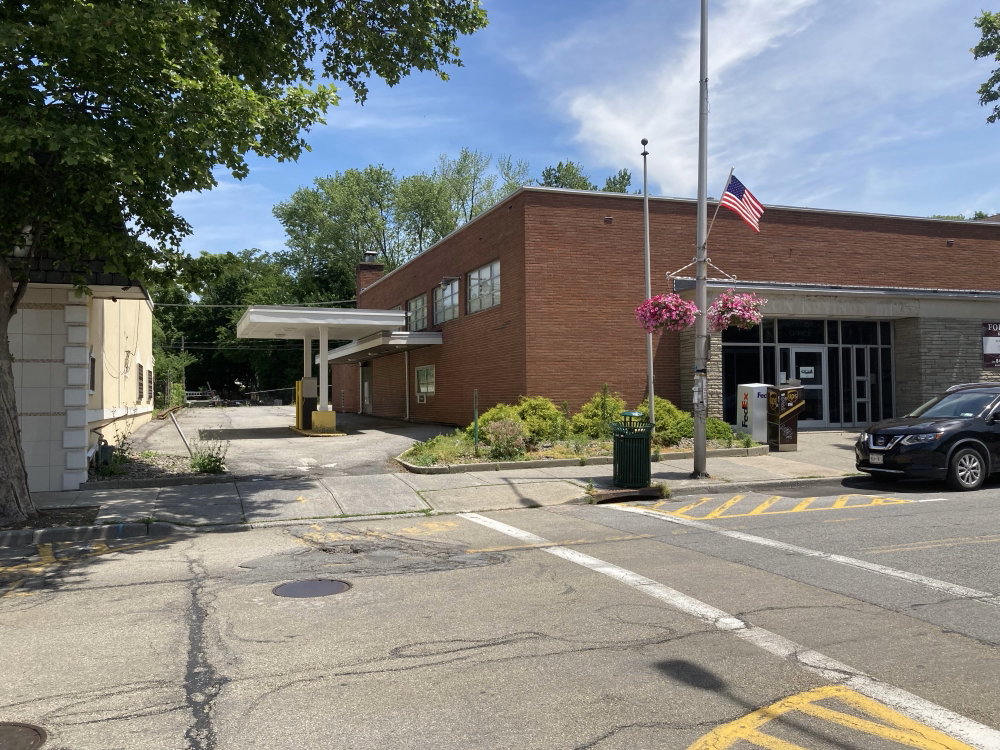 A public plaza would replace the former drive-thru lanes at 364 Main St. (Photo by J. Simms)

Members of the Beacon Planning Board on Tuesday (June 8) said they want to avoid the mistakes of the past in their review of a four-story development proposal for 364 Main St.

The project that would transform the former Citizens Bank building into 27 apartments and nearly 8,000 square feet of retail sits two doors away from 344 Main St., a project that in 2017 was a lightning rod for discontent.

The latest proposal was submitted by O’Donnell Construction Corp., which is led by the same developer who initiated and sold the 344 Main St. project.

“It’s pretty clear to the public that that’s something we don’t ever want to do again,” said Planning Board Member Kevin Byrne.

Because 364 Main is not within or adjacent to a structure in the historic district, the Planning Board, rather than the City Council, will decide whether to grant O’Donnell the special-use permit required to build a fourth floor on Main Street. However, a planning consultant hired by the city, John Clarke, noted that the adjacent Salvation Army building at 372 Main will soon be nominated for inclusion in the historic district. If added, the decision on the special-use permit for 364 Main St. would shift to the council.

Architect Aryeh Siegel said the façade of the proposed building would be constructed with gray brick to mimic elements of historic buildings on Main Street. The plan is to merge two lots, creating, like 344 Main, a block-long development with 16 parking spaces behind the building. Those spaces had been leased to Bernard Kohn, who purchased 344 Main St. in 2017, but defaulted on the parking lease, project attorney Taylor Palmer said. The new project would also use spaces in an adjacent lot on Eliza Street.

The 364 Main proposal would include a 24-foot-wide public plaza that, at nearly 3,000 square feet, is larger than the public park approved last month as part of another four-story project at 416-420 Main St. Local law requires a public benefit of some kind before the city will issue the permit to build a fourth floor on Main Street. (Even with the public benefit, any new four-story project on Main must also recess the fourth floor to minimize its appearance.)

Palmer said the plaza, which would be constructed in the former bank’s drive-thru lanes on the west side of the building, would “enhance the feel for Main Street.”

Planning Board members expressed doubts. Len Warner said that, overall, the proposal feels similar to 344 Main, which was a “catalyst for a lot of feedback from the public that wasn’t positive.” He said he felt the plaza, on renderings submitted to the city, looks “buried” within the property. “Anything we approve should be a real showcase design,” he said.

The park may not receive sufficient sun in the proposed layout, Clarke said, while Byrne was blunter: “Usually when you block off alleyways, those become places for public urination. They’re not public parks. It would be an indefensible space. It’s not something you would ever design as a public park.”

Warner suggested the developer move the plaza to the other side of building and look into an arrangement with the Salvation Army, which has a large front lawn. As proposed, he said, “to dead-end at a parking lot, that doesn’t work at all.”

3 thoughts on “You Call That a Park?”