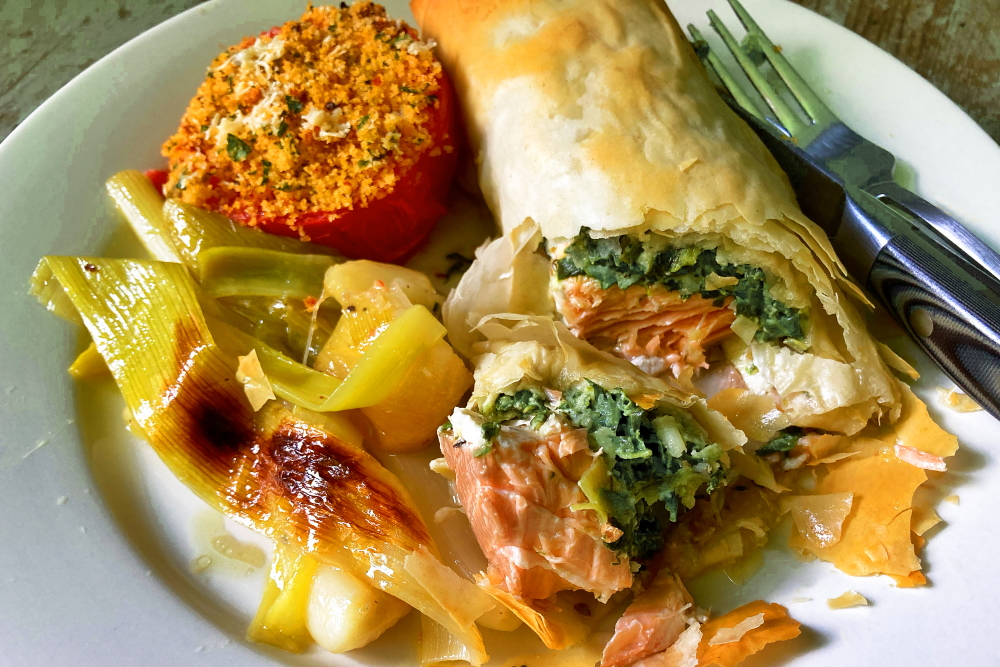 Periyali, the unassuming-yet-haute Greek restaurant on West 20th Street in Manhattan, has always been one of two or three places I could count on for special meals for special occasions.

Although I haven’t been there in some time, my dog-eared copy of their sadly out-of-print cookbook is still in use. It falls naturally open to a small handful of recipes: skordalia, Nicola’s Mother’s Chicken and this salmon-in-phyllo recipe.

Proustian reveries like this can get you into trouble, and sure enough, somewhere in the middle of prepping for the small group I had invited over for Saturday Supper Club, I started to think that maybe this wasn’t such a good idea.

The spanakopita filling (spinach, dill and feta) is simple and can be prepared a day ahead. The salmon needs an hour in a simple herb marinade and a squeeze of lemon. So, what was the problem? The phyllo.

I’ll try to make it easier for you, but it does require more than your usual pandemic-Tuesday-night effort.

Hence a lot of warnings. Don’t let this scare you: It gets easier once you establish a rhythm, which is also a reminder that this is a dish better made for six or more.

While I’m sure there are foolhardy and/or overconfident souls who think making their own tissue-thin pastry is a valid idea, the freezer department of your supermarket is your friend and salvation. (Apollo, Athens and Fillo Factory are reputable brands.)

Make sure you have plenty of clear, workable counter space and gather everything you need, prepped and laid out within arm’s reach before you begin assembly. Always thaw unopened phyllo in the refrigerator for at least 8 hours (overnight) before bringing the boxed, thawed and still-unwrapped phyllo to room temperature (about 2 hours).

When you are ready to assemble, carefully cut the bag open and unroll the stacked sheets onto a clean, dry surface. I suggest a sheet pan lined with waxed paper. Immediately cover the stack with another sheet of waxed paper, topping this all with a damp but well-wrung-out cloth.

Always keep your phyllo covered as you work individual sheets. Never leave the stack uncovered for more than a minute or so, otherwise it will dry out and become super-fragile.

Use a soft bristle brush to coat the phyllo lightly with melted clarified butter, working from the edges first. After one or two you’ll get a rhythm going, but it is probably best to plan on a mistake or two.

Regarding the melted clarified butter: It’s not rocket science, just another bothersome procedure alleviated by the appearance of 13-ounce jars of Organic Valley ghee in the butter department at Foodtown and other markets.

Sticklers will tell you these two things are not the same, but the contents of the glass jar (clearly labeled “clarified butter”) were handily liquefied by simmering the open jar in a small saucepan of hot water. The slightly nuttier taste wasn’t even commented on by my diners and doggie bags were requested, always a vote of confidence from the club members.

It sounds a lot more complicated than it is, but it’s worth it.

Adapted from The Periyali Cookbook   /   Serves 6

1. Heat 1 tablespoon olive oil in a large skillet over medium heat. When hot, add onion and leeks; cook, stirring regularly until lightly browned. Add remaining olive oil and spinach and continue cooking until mixture stops steaming. Stir in dill, salt and pepper until blended. Transfer mixture to a large bowl and refrigerate until cooled. (Do this up to a day ahead.) When ready to proceed with the recipe, blend in eggs, cheeses and bread crumbs. it should remain chilled.

Marinade
(for the salmon; marinate and chill for an hour before assembly)

2. Chop all of the herbal marinade ingredients fine and sprinkle into a shallow pan; stir in the olive oil. Pat the salmon filets dry and dredge them in the marinade; refrigerate up to one hour while you prepare the phyllo.

3. Preheat oven to 375 degrees. Place two sheets phyllo, long side facing you on a large clean work surface. Cut into 3 sections about 4½ inches wide; cut these strips in half horizontally. (These will be patches to reinforce the bottom of the individual packets. You will have extras.) Set aside and keep covered while you assemble the packets.

4. To make individual packets: Lay a sheet of phyllo on a flat work surface (with plenty of room to spread out), the short side facing you. Brush with ghee working from the edges to the center. Carefully place another sheet on top of it and brush that with ghee as before. Center left-to-right one of the phyllo patches about 3 to 4 inches from the edge closest to you; brush again with ghee. Sprinkle the filets with lemon juice and center one filet horizontally on the patch. Top the filet evenly with about ⅓ cup of the spanakopita mixture. Carefully fold the edge of the large sheet closest to you over the filet and stuffing. Brush the exposed portion with ghee and fold the long left and right sides of the large sheet over the packet. Brush the exposed sides of the folded sheet with ghee and roll the salmon and filling into a neat packet, brushing lightly with ghee as you go. Seal the end flap to the packet with another brush of ghee. Set aside on a baking sheet pan lined with parchment. Cover with waxed paper, another moistened towel and refrigerate. Repeat this process for the remainder of the filets. You may do all this up to 2 hours before baking.

5. Bake packets on the middle shelf of the preheated oven for 15 to 20 minutes until golden brown.