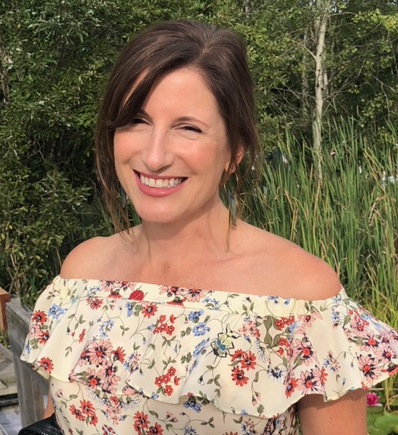 Deirdre “Dede” Farabaugh, the new director at the Desmond-Fish Public Library in Garrison, recognized that she was living “the dream” — it just wasn’t hers.

She worked as a project manager for Apple in its iTunes division. Unfortunately, she says, “tech was never my driving force.” So she shifted gears. “Going back to grad school was my midlife crisis,” she says, with a laugh.

The Colorado native, who has a bachelor’s degree in English from Mills College in Oakland, California, left Apple for New York University, where she earned a master’s degree in Visual Culture: Costume Studies. At the same time, she pursued a master’s in library science at Long Island University, while working at the reference desk of the NYU library.

She also met Victor Burgos, her future husband, and moved to Beacon soon after he did. After graduating, Farabaugh began working part-time in the reference library at Mount St. Mary’s College and at the Ralph Lauren Library, where there was an archive of clothing.

In the summer of 2015, she attended an open house at the New York Public Library and was hired on the spot as children’s librarian, “although I’d never so much as done a story-time.” In 2018 she was named director of the Putnam Valley Free Library.

There, she worked to “turn it into more of a welcoming space. We started programming, hired energetic staff members, reshaped our volunteer program and reestablished the relationship with the town.”

It was not easy leaving Putnam Valley, but when the Desmond-Fish job became available, Farabaugh, who now lives in Cold Spring, recognized that it was “a bigger library, with a larger budget and a very engaged community.”

A foundational idea at Desmond-Fish, she says, is a focus on racial equity and social justice. “It was important in Putnam Valley, too; we had educator-led, courageous conversations about race.” She also plans on partnering with the Philipstown Behavioral Health Hub, the nonprofit that provides a point of access for mental health and addiction recovery.

“Mental illness is the next pandemic,” Farabaugh says. “Everything that everyone’s gone through for the  past year and a half — how do we process that? What has the last year meant to you?”

Farabaugh also foresees working with her counterpart at Butterfield, Johanna Reinhardt, to “co-program for the benefit of the town.”

She says one issue now under discussion for Desmond-Fish is Sunday hours. The library is usually open from 1 to 5 p.m., except over the summer. “We’re down a couple of positions right now and need to safely staff the library,” she says. “We’re weighing the effect of that against being here to serve the community, as some people do very much want to come in and be away from their home.”

For Farabaugh, a central question is: “How do you serve this community when people just think of the library as a building?” A library, she says, is “a hub of the community. Our community needs it now more than ever, having been robbed of the traditional things which bring it together: graduations, weddings — how do you memorialize time when life is completely altered? How do you remain relevant? How do you become a community leader? Sustainability is very important. What are you giving the next generation?”