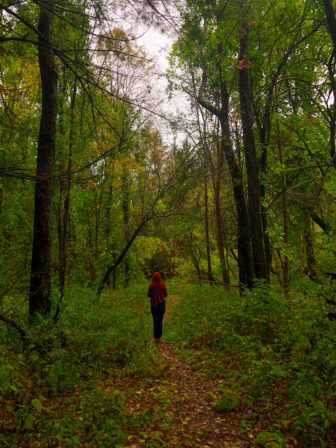 Some of the colors of the New Fall (Photo by B. Cronin)

I had come back from an early morning hike in the Highlands. The temperature was in the high 70s, the air was ripe with humidity, the leaves were green, I was covered in sweat and mosquito bites and it was not yet 10 a.m. The calendar said October. I have not known the calendar to lie, but I did stare it in the eye for a good long while.

Years ago, I started spending a good deal of time down south, for family reasons. To familiarize myself, I did what I always do: Read the local papers. (If it’s not in a newspaper, is it worth knowing?) The types of articles they ran in the fall were the same ones you see in the Hudson Valley in the spring, i.e., you have survived another season of brutal, deadly weather that kept you trapped inside. Open the windows and get outdoors.

If you’ve never experienced summer in the Low Country of coastal South Carolina and Georgia, imagine being repeatedly beaten with a wet shag carpet and blasted with a hair dryer the size of a Ford F150. The bugs are big enough for saddles and you can set your watch to the biblical thunderstorms that roll in at 4 p.m. Like winter in the Hudson Valley, it is not without its charms. Also like winter in the Hudson Valley, you are always ready for it to end.

But it was still hard for me to accept fall as a season of renewal. Fall here is when the fields are emptied and the darkness comes and we enjoy the blaze of leaves turning. We say goodbye to the wild abandon of summer to crack a book. Fall is the training wheels for winter.

Not this year. We are coming off one of the wettest and most humid summers ever in the Hudson Valley, a summer that will live long in mosquito legends. My wooden garden table has mushrooms. The air is clammy and moist even when the temperature is in the low 60s, leaving you cold and sweaty. As I sit outside writing this, the forecast calls for no rain, the weather radar displays no rain, yet it is raining. The warm nights and wet days continue, delaying and dulling the fall foliage. The leaf cover was also decimated throughout the summer by various surging leaf diseases and a banner season for the gyspy moth. As a result, the remaining leaves stubbornly stay green to photosynthesize enough to keep their hosts alive.

I would like to think 2021 is an outlier, but it’s more likely that this is the beginning of our New October. Three years ago, we did a series in The Current on the local effects of the climate crisis and learned from scientists that the years to come would be hotter and wetter. In 30 years the climate here will likely be what North Carolina has today.

For someone like me, who has spent the majority of his life in New York and North Jersey, the loss of the familiar temporal sights, sounds and smells of early autumn is disorienting. As the kids would say, the vibes are off. There’s another word for that, solastalgia, which describes a feeling of homesickness even though you’re at home.

The Current also more recently reported on the need for infrastructure that will mitigate the effects of climate change: higher train tracks to withstand sea level rise, more trees to reduce air temperatures, landscapes that soften the blow of storm surges. We also need to start talking about strengthening our mental resiliency, especially since that can’t be held up by Congress.

I can’t claim to know exactly what this framework will look like, but I’m going to start by changing my approach to fall. It’s no longer a buttoning up and putting to bed, but a season of reckless outdoor freedom. It’s a season that encompasses both apple picking and long hikes in the early warm darkness, pumpkin spice and suntan lotion, less flannels and more board shorts. Someday I will reminisce to my grandkids about the pleasures of Old Fall, unless some quick changes are made and crisper Octobers return sometime mid-century. In the meantime, we must learn to love the fall we have, not the fall we want.

2 thoughts on “Out There: Southern Comfort”