Congress is considering a $1 trillion bill to fix roads, bridges, dams and water systems. What does it mean for the Highlands?

Many parts of the Hudson Valley, New York and the U.S. need serious upgrades.

The Highlands have some trouble spots but overall seem to be in good shape. Mayors and highway and water superintendents are optimistic about the state of our roads, bridges, dams, drinking water and sewage systems.

After four years of stalemate with then-President Donald Trump, only recently has Congress advanced spending bills to address the problem of crumbling infrastructure. On Aug. 10, the Senate agreed, on a 69-30 vote, to send $110 billion to the states over the next five years to fix aging roads and bridges and $55 billion for water infrastructure. The House is expected to vote on the proposal by the end of the month.

The word infrastructure was first used in 19th-century France in the context of railroad planning. During World War II, NATO military planners adopted the term to signify any “fixed installations which were necessary for the effective deployment and operations of modern armed forces.”

Adam Smith may have described infrastructure as “public goods” undersupplied by private markets; economists refer to roads, bridges, ports and water systems as part of the “nation’s physical capital”; in the early days of the Republic the Whigs would have called for more public support for “internal improvements” like canals and turnpikes.

Today, President Obama might call for more investment in “nation-building at home.” The term infrastructure, as we know it today, finally made its way into public discourse in the late 20th century when it replaced “public works” and is used to describe the physical and organizational structures and facilities (e.g., buildings, roads and power supplies) needed for the operation of a society or enterprise.

From Infrastructure: An Investment in the Future, a 2016 report by Hudson Valley Pattern for Progress

The Highlands still have challenges, and the money expected to flow from the U.S. Treasury to the states and then to counties and municipalities could have a substantial effect both on the condition of our shared resources and in creating jobs — although finding enough skilled workers to fill those jobs could be a problem that wasn’t anticipated. It’s another issue of many that may spiral out of the huge influx of cash.

The need for an infrastructure upgrade should not be a surprise. For years and decades, groups such as Hudson Valley Pattern for Progress and the American Society of Civil Engineers have been sounding the alarm, noting that the state of our shared resources is a reflection of the nation’s economic vitality. Poor roads, bridges, dams and water systems make markets less efficient and life more expensive. 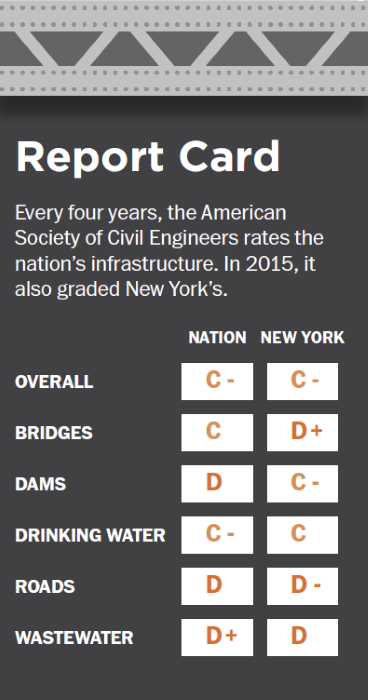 Every four years since 2001, the ASCE has compiled a report card on U.S. infrastructure. In their most recent, released this year, the engineers said they were hopeful, giving a grade of C-, an improvement over the D+ of 2017. It was the first time the grade had risen. By ASCE’s calculation, there is a national “investment gap” in infrastructure of $2.59 trillion, including $1.2 trillion for roads, $434 billion for water systems and $81 billion for dams.

That’s about the same gap — on a different scale — calculated nearly 10 years ago by New York Comptroller Thomas DiNapoli when he issued a report on the challenges facing local governments called Growing Cracks in the Foundation. He concluded that the rising costs of construction, fuel and asphalt were preventing many local projects from being completed and cited a study that projected local governments would need to spend $3.9 billion annually on local roads and bridges and water and sewer systems. At the time, they were spending $1.2 billion.

Rep. Sean Patrick Maloney, a Democrat whose district includes the Highlands, sits on the House Transportation and Infrastructure Committee. I asked him last week how the money will get from Washington, D.C., to our district.

“Typically what happens is that the federal dollars are funneled through the state Department of Transportation [DOT], according to the governor’s priorities,” he explained. “There are also funds [in the bill] for specific things, such as billions of dollars for commuter rail — Metro-North will do very well — and billions for water infrastructure.

“If you think about sewer and storm water projects, those are important in communities with older infrastructure such as Beacon,” he said. “There are [environmental] requirements around drinking water and storm water runoff, and cities have trouble meeting it, so they get in situations where they are at odds with regulators but they don’t have the resources to fix it.”

The bill could also fund earmarks, or money set aside for specific uses such as a Philipstown highway garage, that governors can’t divert, or a bill introduced by Maloney to fix thousands of small community bridges across the country that are structurally deficient. “We have 1,700 of them in New York state alone,” he said. 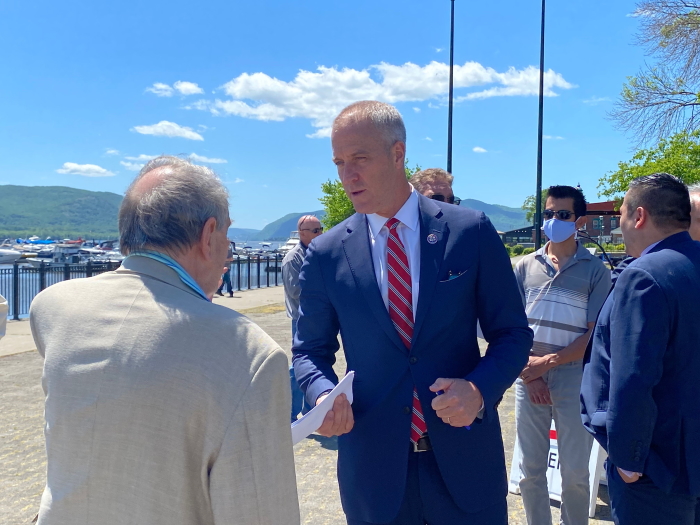 Rep. Sean Patrick Maloney, a Democrat whose district includes the Highlands, at a news conference in May announced he had introduced six infrastructure bills. (Photo provided)

Given the gaps that the ASCE and others have identified in what is needed, and what this bill will provide, is it going to be enough? “I wouldn’t get too hung up on that,” Maloney said. “If you’re spending what we’re talking about in the bipartisan deal, you’re talking about a significant increase in state DOT budgets, upward of 30 to 40 percent in some cases.

“That will allow the state to move further down the list of projects it has been holding off on because it has not had a guarantee of funding,” he said. “One of the things that’s so important about passing a five-year bill like this is that the state can issue contracts for a large number of projects next year and not have to wonder if the money will be there to finish them.”

In Newburgh in May, Rep. Sean Patrick Maloney announced that he had introduced six bills intended for inclusion in the infrastructure legislation, including to:

■ Restore a lapsed 2012 program to provide $325 million to communities across the country for scenic byways;

■ Create an infrastructure bank to provide loans and bond guarantees for projects and make equity investments;

■ Require the federal Department of Transportation to investigate any structural defects in the Gov. Mario M. Cuomo Bridge; and

Asked what he thought of ASCE’s most recent grade for New York infrastructure (C-), he said: “That sounds about right. We’re not at the bottom but we’re not where we should be.

“One of the great things about New York is that our parents and grandparents made big investments in infrastructure, and that has given us the growth and the economic power that defines the state,” he said. “We need to continue those investments because so many were made 70 or 80 years ago and the useful life of those projects is ending. We can be an ‘A’ but we need to invest again.” 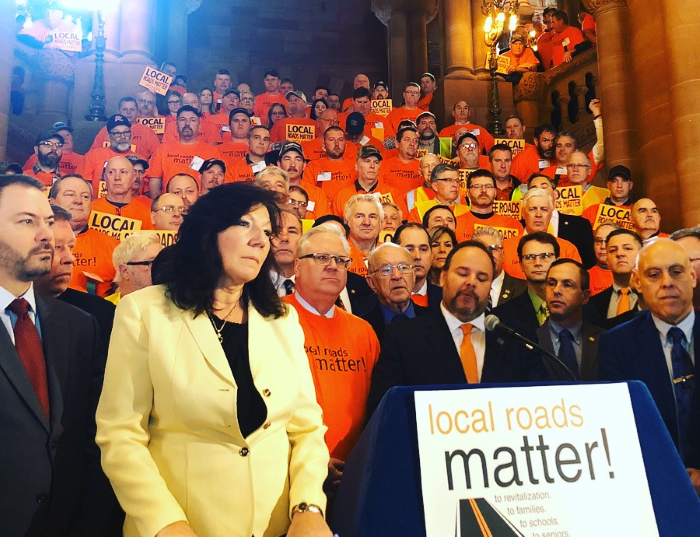 In March 2020, state Sen. Sue Serino, a Republican whose district includes the Highlands, joined town highway superintendents and workers at a rally at the Capitol to call for increased funding. (Photo provided)

In Dutchess, Marc Molinaro, a Republican who is midway through his third term as county executive, does not share Maloney’s optimism about the infrastructure money expected to come out of Washington.

Molinaro says he fears that the billions of dollars sent to New York will get tied up in Albany red tape and be distributed only to “shovel-ready” projects that may not address long-term needs.

That, he says, is what happened after President Barack Obama signed an $831 billion infrastructure bill in 2009 and, to an extent, it’s happening with American Rescue Plan funding distributed in response to the pandemic shutdown.

How Do We Pay for It?

That’s a good question and was the sticking point in many of the discussions between then-President Trump and Democrats in Congress.

In 2018, Trump proposed $200 billion in federal funding paired with $1.5 trillion in private investment and hinted at tolls on all federal highways, which didn’t go over well with the fleet industry. Public-private partnerships are attractive because they require less taxpayer money but carry the risk of “abdicating control of public property to private interests,” notes civil engineer Henry Petroski in his book, The Road Taken: The History and Future of America’s Infrastructure.

One relatively simple measure would be to raise the federal gas tax, which has been 18.4 cents per gallon since 1993, but many elected officials are reluctant to do that. It funds highway repairs but has suffered because hybrid and electric vehicle owners don’t pay as much or any of the tax.

Other novel ideas have surfaced, such as from the Construction Industry Council of Westchester, which has proposed that tax revenue generated by the legalization of marijuana could be spent on infrastructure in a plan it called “Pot for Potholes.”

Maloney argues that the $1 trillion bill pending in the House passed with bipartisan support in the Senate only because Democrats made it easy for Republicans to vote for it by removing the funding mechanism, which is higher taxes on corporations and ultra-rich Americans.

Without that, he said, “we’ve given the Republicans the chocolate-chip ice cream of infrastructure investments. We’re going to do that heavy lifting [of funding the bill] without them, so that has made it politically easy for them, and that creates a space for more bipartisanship on core infrastructure.”

“Albany would tell us which [transportation projects] they want to move with. And if you’re not ready to go, it’s not happening,” he said. “The last time we did this, we saw a great amount of guide rail enhancements, because those were the things you could move on quickly.”

“I have seen every transportation bill that anyone has ever talked about in nearly 30 years, and this state squanders those resources and doesn’t direct enough of the aid onto the ground,” said Molinaro, who served in the state Assembly from 2007 to 2011 and ran for governor in 2018. “And I fear that that is going to be repeated.

“Historically, almost 80 percent of those federal dollars flow through Albany decision-making,” he said. “We used to say that the state has this collar on Department of Transportation expenditures, and it’s not going to let more than a few million dollars through that collar at any given time.

“Albany would tell us which [transportation projects] they want to move with. And if you’re not ready to go, it’s not happening,” he said. “The last time we did this, we saw a great amount of guide rail enhancements, because those were the things you could move on quickly.”

Although the word infrastructure can encompass many areas, including public buildings, schools, energy, levees, ports and parks, we will take a closer look at four: