While walking around Bard College a couple of weeks ago, I stumbled upon some buckeyes. Not Ohio State students. Actual buckeyes lying on the ground beneath a buckeye tree. I let out a tiny mewp of glee and bent to pick one up.

I hadn’t seen buckeyes since I was a kid. Buckeye trees are fairly ubiquitous in Indiana. We even had one in our yard, planted a century earlier along with a remarkable variety of other tree specimens, prompting my father, an incurable punster, to refer to our property as “the Barboretum.” (Please forgive me for sharing that miserable groaner with you.)

I adored buckeyes as a child, and would collect pocketfuls each fall. Sleek, glossy blobs of mahogany brown with tan “eyes,” they seemed as pretty to me as polished treasures. I also learned from an early age that they were poisonous, which only increased the gallantry of my affection by making them seem Rapunzel-esque: beauties trapped by a terrible curse.

I was painfully shy growing up (as may be evident from the fact that I was befriending tree detritus). All I ever wanted was to be left alone with my toys, collections and books. Nonetheless, my parents thought it was a good idea to regularly propel me into social situations — Quaker youth group parties, Girl Scout outings, holiday gatherings and the like. It was at one such ordeal, a Halloween get-together at someone’s house to which I’d been sent with my big sister, that I first encountered a different kind of buckeye, an edible one.

Elton John’s “Island Girl” was playing on the turntable, so it must have been 1975 or ’76, which means I was 12, my big sister 14. The teens danced and laughed as I sat by myself in an armchair in a corner of the living room. Suddenly the mother of the house appeared, bearing a tray of little, round balls of peanut butter dipped in chocolate. They tasted like especially yummy Reese’s cups, and looked just like my beloved buckeyes. And indeed, that was their name, the mom told me as she offered me another one. After passing them around the room, she placed the half-empty tray on the table beside me.

This was the closest thing to divine providence I had ever experienced at a youth group function. I sat there sneaking one after another of the delicious candies into my mouth, no longer minding that I was not participating in the ostensible fun. Who needed it? I had my very own cache of yummy buckeyes to keep me company.

“Buckeye” is fun to say; “horse chestnut” is not, so it’s a good thing these candies were invented in the Midwest. In researching this column, I discovered that the seeds I encountered at Bard were probably horse chestnuts and not the former. Horse chestnut trees are native to Eastern Europe, have showier flowers than buckeyes and are now grown throughout northern latitudes. Their seeds look almost identical, however, and are similarly toxic.

A transplant myself, I have in many ways outgrown my childhood shyness. But I still sometimes panic at parties, and can take undue comfort in a tray of tasty morsels. So here’s a recipe for everyone like me who sometimes just wants to be left alone with a stash of treasures. Or for anyone like my son Dosi, who thinks that Reese’s cups are an act of divine providence. 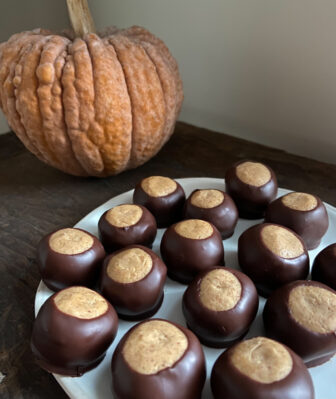 1. Line a baking sheet with parchment paper or a silicone liner and set aside. In the bowl of an electric mixer fitted with the paddle attachment, combine the melted butter, peanut butter, powdered sugar, salt and vanilla; mix until thoroughly combined.

2. Roll the peanut butter mixture into balls approximately 1 inch in diameter, arrange on prepared baking sheet and transfer to the refrigerator to cool. Meanwhile, place the chopped chocolate and coconut oil in a heatproof bowl set over simmering water and stir until melted (or use a microwave). Transfer the melted chocolate mixture to a heatproof mug or metal cup.

3. Working one at a time, poke a skewer into the top of a peanut butter ball and dip it into the melted chocolate, leaving a spot of exposed peanut butter on top. Allow excess chocolate to drip off, then return the ball to the baking sheet.

4. Using the tip of your finger or of a warmed offset spatula, smooth away the skewer holes. (To warm the metal spatula, dip it into a mug of just-boiled water until heated, then wipe off the water.) Chill buckeyes until firm and the chocolate is set.