A  judge on Monday (Nov. 1) dismissed a federal lawsuit brought by Nelsonville residents who oppose construction of a 95-foot cell tower overlooking the Cold Spring Cemetery.

In a 15-page ruling, Judge Vincent Briccetti of U.S. District Court in White Plains said that some of the residents’ claims belong in state court, not federal court, and that others were too weak — and, in one instance, “frivolous” — to warrant the cancellation of a settlement reached by the village and cell tower companies in January 2020.

Briccetti presided over that settlement, which ended litigation initiated by the companies in 2018 when the village denied their tower application. The agreement reduced the tower’s height and the village granted a building permit in June 2020.

Four months later, in the case now terminated by Briccetti, 18 residents sued the village and the companies: Verizon Wireless, AT&T and Homeland Towers.

On Wednesday (Nov. 3) David Eisenbach, a leader of the group, said members are considering an appeal to a higher court but also “remain confident that we will win in the New York State court and stop the cell tower.” 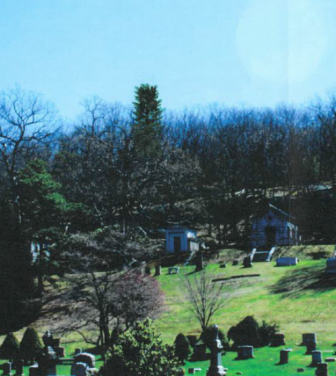 A rendering from a consultant’s report of what a 95-foot monopine would look like overlooking the Cold Spring Cemetery.

Among other contentions, the lawsuit by Eisenbach and others asserted that the village and companies violated the national Endangered Species Act by failing to consider possible adverse impacts of the tower on endangered or threatened bats and acted in an “arbitrary and capricious” manner in reaching the 2020 settlement, thus engaging in an “abuse of discretion.” They also argued that issuing the building permit ran afoul of state environmental law and the village zoning code.

The residents sought revocation of the permit, termination of the settlement and a ban on tower construction.

Quoting in part from a previous ruling, Briccetti noted that regulations implementing federal environmental law only “impose ‘rather modest obligations’ upon wireless providers” and that “the Federal Communications Commission has categorically excluded ‘the construction of wireless facilities’ from environmental processing in most cases.”

He also called the complaint alleging “arbitrary, capricious” behavior “frivolous” because the procedural law the residents invoked “applies only to federal agencies, not municipalities, private corporations or individuals.”

Further, he wrote that the residents “do not state any recognized ground, such as fraud, accident or mistake,” as justification for overturning the settlement but instead simply “disagree with the court’s decision” to ratify it. He added that the plaintiffs “have not sufficiently alleged [that] relief from the [settlement] order will ‘prevent a grave miscarriage of justice’ ” as defined by other federal judicial decisions.

Finally, he wrote, allegations involving state environmental law and local zoning are issues for a state judge to consider.