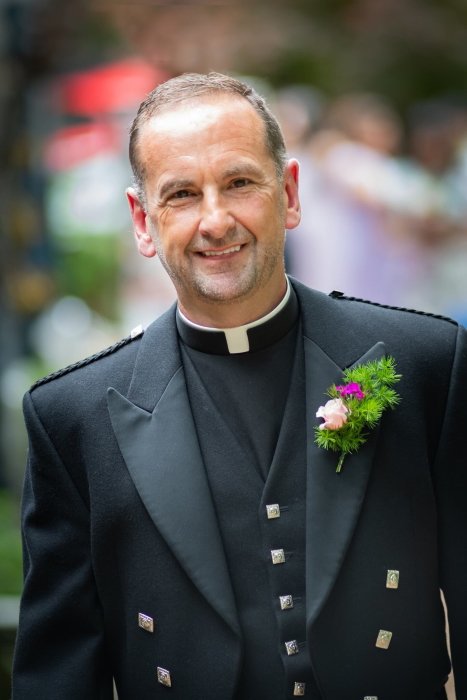 Why did you leave the church?
I didn’t feel comfortable with some of the stances the Catholic Church was taking on people’s lifestyles. I came to the U.S. [from Scotland] in 2000. I worked at St. Vincent’s Hospital in Manhattan as a chaplain, and part of the chaplaincy process is you have to go into therapy. If you’re meant to be a counselor, you need to understand where you’re coming from. I was always aware that I was gay, but I didn’t want to address it. Part of the counseling is that you have to address it.

How tough was the conflict?
With one patient at St. Vincent’s, when I first went into his room, his partner — an ex-seminarian — was there. He said: “We don’t want you to be here.” I felt like saying: “Guys, I’m gay myself!” But because I was wearing the collar, and with the position I was in, I couldn’t reveal that.

What happened after you left the church?

I found a full-time job. That was in 2008. Then somebody introduced me to CITI Ministries, which is for ex-Catholic priests who have primarily left because of the celibacy requirement. So, I joined the organization. I loved being a priest; I loved being involved in people’s lives. After I joined CM, the doors began to open again. Primarily, it was weddings. The couples I’d be working with were maybe Catholic but felt disenfranchised.

Why did you open the bed-and-breakfast?
I bought a house in Beacon in 2007. I wanted a place of seclusion, with a few rooms, so that I could invite friends up and enjoy the hike. My 50th birthday was approaching and I had been commuting [to Manhattan] almost every day. I was also doing more weddings, funerals and baptisms — not only people from the Catholic side, but people from other faiths. Being from Beacon, I liked the idea of being a lighthouse — the light for a place of safety. Hermitage stems from my love of St. Francis of Assisi. He went to the hermitage in Assisi, and I’ve been there a number of times. The word denotes a place of refuge, a place of retreat.

Where do you perform the ceremonies?
All over. The other weekend, I officiated a wedding in Beacon and one in Manhattan. I focus on the love of the couple and their story, because certainly it was love that brought them together and will sustain them. And their family and friends will sustain and support them. That resonates in people — that they belong to something, and maybe it’s not a church or a building any longer, but it’s more diverse.

One thought on “5 Questions: Jim Rooney”