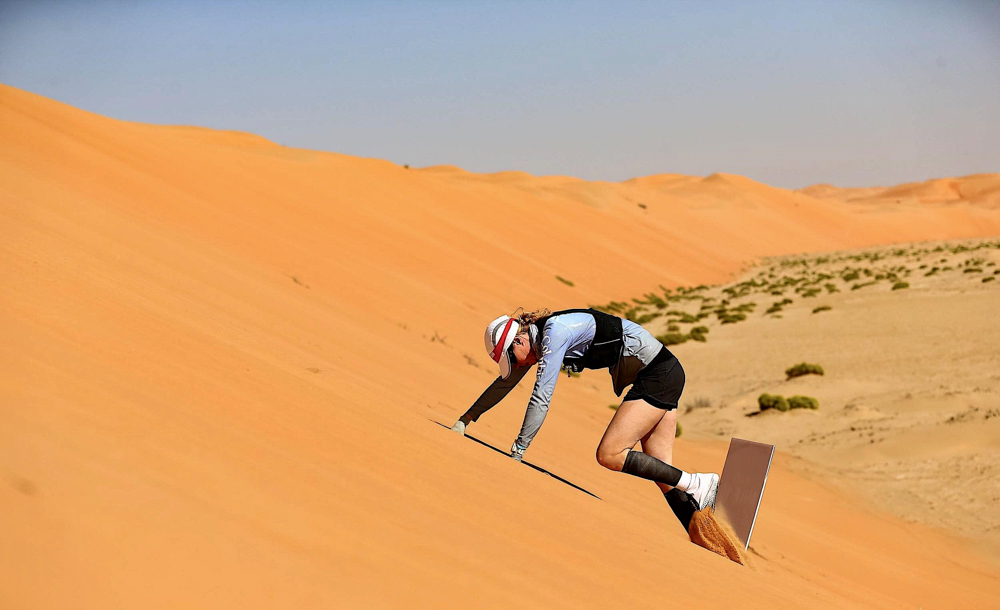 Gwendolyn Bounds competes in the cliff climb during a Spartan race in Abu Dhabi. (Photos provided)

How did Gwendolyn Bounds of Garrison end up in the searing heat of the Abu Dhabi desert, covered in blood and sand, crawling under barbed wire alongside some of the toughest athletes in the world?

She wanted to do something hard.

Four years ago, at a dinner party, an older guest asked a young girl what she wanted to do when she grew up. Bounds recalled that the girl rattled off a long and impressive list. She was charmed by the girl’s tenacity and ambition, but had a depressing epiphany: No one would ask a 46-year-old woman that question.

It’s not like Bounds didn’t have a portfolio of accomplishments to be proud of. A former reporter and editor for The Wall Street Journal, she is the vice president and chief content officer for Consumer Reports, in addition to being the author of The Little Chapel on the River, an account of Guinan’s Pub on Garrison’s Landing following 9/11, and a member of the board of this nonprofit newspaper. But now what?

“There’s just a point in life in which you’ve crossed that Rubicon,” she said. “You have these patterns of who you are. All of us, at some point, if we’re lucky enough to live that long, are going to face that and think: ‘What does this mean?’ Are we just managing to the decline?”

The next morning, Bounds searched Google for: “What are the hardest things you can do?” That led her to discover Spartan races, events in which runners break up the monotony of long-distance running by climbing slippery ramps, swinging from ropes, crawling through mud pits, swimming under walls, hauling tires, jumping over fires, and anything else the organizers can dream up.

A few clicks later, she read an article from Outside in which the author quit a Spartan race halfway through because it was too hard.

But what if she, too, failed? Most adults build their lives around avoiding failure: We’ve figured out what we’re good at, and pick our careers and hobbies accordingly. The idea of going back to Square One and being the worst at something seemed humbling but also fascinating, she said. “We’re so wired to write and talk about our successes.”

Soon enough she was competing in her first Spartan event, held at Citi Field in Queens. It was hard. She fell while climbing a rope ladder and slammed into the ground. Tears welled in her eyes. She was failing. She thought about quitting. She could walk off the course and out of the stadium and no one in her life would ever know.

There’s a phrase that’s often used to promote Spartan races: “You’ll know at the finish line.” It’s cheesy, but, as Bounds found, when she managed to reach the finish line, it was true. “I just knew at that moment that this was for me,” she said. “This was going to be a part of who I am.” 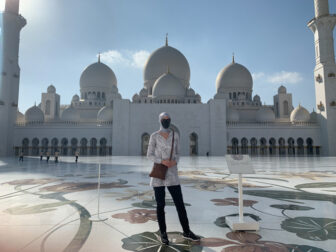 Once she knew she could finish, she worked on finishing faster. Training for a Spartan race is different from training for a long-distance run. You’re no longer the crazy person running around the neighborhood at dawn or midnight. You’re also the crazy person hauling 40-pound buckets of rock salt, waiting for the Haldane football team to finish practice so you can flip heavy tires on the turf, sneaking onto the playground after the children have gone home so that you can swing from the monkey bars.

Bounds notes that an underrated advantage for a Spartan racer is having a spouse willing to consider a hay bale atop a spear-throw stand as a yard decoration.

The work paid off. In 2019, Bounds placed high enough in enough races to earn a spot in the Spartan World Championships in Lake Tahoe, where she finished 11th in her age group. Shortly thereafter, COVID shut down competitions worldwide and, for a while before vaccines were available, the virus also shut down Bounds.

Since her recovery, she has completed 14 races and finished in the top three in her age group in nine, including a gold medal in Ohio. 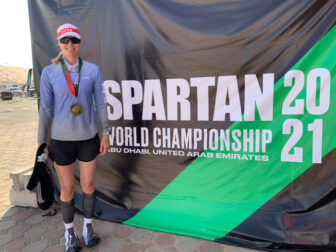 Bounds, after completing the Abu Dhabi race, smiles despite a broken tailbone.

That led to her closing out 2021 with a return to the world championships, which were held in early December in the United Arab Emirates. She placed sixth in her age group, a finish that she initially considered disappointing, until she took into account that she fell off an obstacle not even halfway through the 13.5 miles and fractured her tailbone. She shifted her goal from first place to finishing.

“The importance of managing that kind of mental pivot is one of the many things racing has taught me about life,” she said. “We can plan all we want, but there are always obstacles big and small coming at us that we don’t expect and can’t plan for. The older you get, the more you learn there are different ways to define winning.”

Listen to a conversation between Brian PJ Cronin and Gwendolyn Bounds on The Highlands Current Podcast:

One thought on “Doing Hard Things”