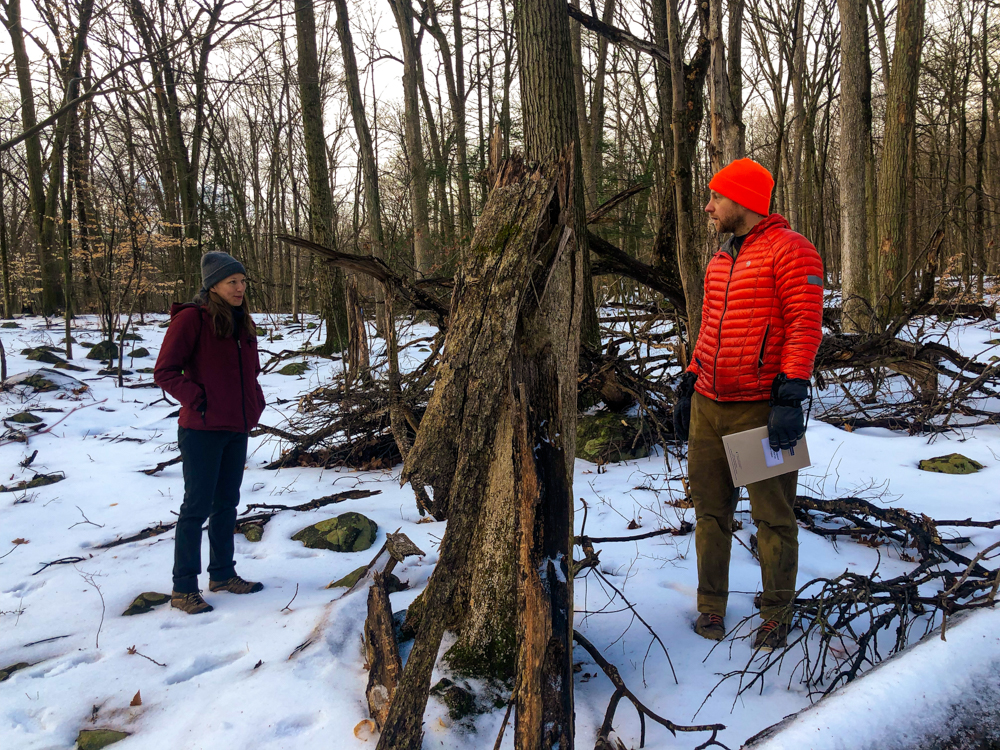 Nicole Wooten and Eli Roberts examine a fallen tree in the Nelsonville Woods. (Photo by B. Cronin)

At first glance, it looks like whoever printed Eli Roberts’ business cards was drunk. There’s a ¾-inch notch missing from the top of every one of them.

But Roberts is a farmer and forest manager, and the notch on his card is an angle gauge to measure the density of a forest to see if it’s overstocked. You close one eye, hold the card in front of you about as far as your arm can stretch, and see how many trees around you are wide enough to fill the entire gap.

You can then calculate if the forest is reaching what’s known as “the zone of imminent competition mortality,” or the point at which less-established trees will die because there aren’t enough resources to support them.

I recently received an email from a reader who wanted to know why there are so many trees on the ground in the Nelsonville Woods. Anytime I need help unraveling tree mysteries I turn to Roberts and Nicole Wooten from the Hudson Highlands Land Trust, who went to forestry school together and forget more about trees in a day than I’ve learned in my life. Which is how, on a snowy day a few weeks ago, we ended up half a mile down the green trail off Secor Street, each with one eye closed and Roberts’ business card in hand, spinning in circles.

It’s easy to imagine the forest as timeless, but the Nelsonville Woods, and many of the Highlands’ forests, are relatively young. The stone walls point to a past as farmland. We know the land was cleared at least twice, first by European settlers and again in the sheep-rearing craze of the early 1800s. Many of the trees wound up in the furnaces at the West Point Foundry.

Roberts estimates that the dominant trees in the Nelsonville Woods are more than 100 years old, but many of the trees around us were less than 50. Still, enough trees were wide enough to fill the gap in Roberts’ card and lead to some troubling math. The zone of imminent competition mortality was, well, imminent.

The evidence was all around us, on the ground. Winter days are the perfect time to look for fallen trees; you can see deeper into the woods and the snow helps the trees stand out. The lack of leaves also makes it easier to follow the paths trees take as they wend their way toward gaps in the canopy, straining to reach the light.

In some cases, you can see where a trunk makes a hard turn. That’s usually the result of a space in the canopy opening because a larger tree nearby fell. The ghosts of the forest shape what we see.

“That’s a somewhat rosy picture of it,” said Wooten when I explained my hypothesis.

In the woods, there’s always more to see. The open spaces in the canopy aren’t making room for more oaks, whose acorns support squirrels and bears. Instead, oak saplings are getting eaten by the deer, who are flourishing because wolves and mountain lions were driven out of the Northeast. That just leaves room for plants that deer don’t eat: invasive species such as Japanese barberry and Tree of Heaven, which provide habitat for lyme-infected ticks and the spotted lanternfly.

At the same time, ash trees are being felled by the emerald ash borer, hemlocks by hemlock woolly adelgid, and all the trees’ roots systems by invasive earthworms plowing their way through the leaf litter, leaving fewer nutrients. The changing climate is producing more intense storms, droughts followed by deluges and increasingly warmer temperatures. If one species of plant or insect fades, the species that depend on it for food and shelter also die.

The forest may be working itself out, but it’s doing so in the face of new and mounting pressures. “We’re losing some things that we may never get back,” Wooten said.

The arc of the forest may be long, but land management practices can bend it toward stability. That doesn’t just apply to professionals like Roberts and Wooten, but anyone who cares about the woods, from amateur naturalists to people who hike often enough that they notice when something’s wrong and write to the local newspaper.

“I have hope that we’ll achieve a balance so that future generations can walk around the Nelsonville Woods and not see potential indications of global problems, but rather a forest that’s sustainably thriving at all levels,” Wooten says — even as it constantly changes and adjusts every time a tree falls.

One thought on “Out There: Tree’s a Crowd”