Delivering the last State of the County address of her term-limited tenure, Odell acknowledged that villages and towns for years asked Putnam to share sales-tax revenue. The county steadfastly refused. (Sales tax goes first to New York State, which gives some of it back to each county. Unlike Putnam, most counties return a portion of their allotment to the towns and villages in which it originated.)

Now, Odell told the county Legislature in a special session in Carmel on March 10, her administration has taken another look and collaborated with Philipstown Town Board Member Jason Angell and Cold Spring Trustee Eliza Starbuck on implementing their “share the growth” concept.

Instead of automatically granting villages and towns a slice of sales-tax income, the model only provides it in a year in which Putnam County’s sales-tax revenue increases over the previous year. The overall portion going to towns and villages would be divvied up on a per-capita basis. 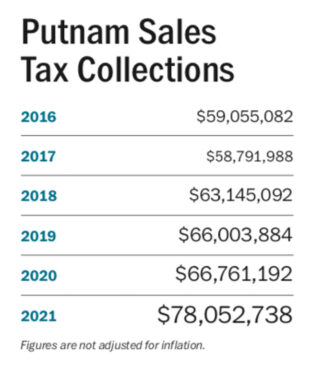 To start sharing, Odell wants to combine $5 million in a municipal sales-tax allotment with $5 million from the county’s $19 million in federal COVID-related American Rescue Plan Act (ARPA) money, creating a pool of $10 million.

Angell told them that “it could really be a legacy accomplishment for Putnam to share some of the growth [in sales tax] in the good years, protect itself from unfunded mandates, but in growth years invest together and create a source of local revenues that could stabilize local taxes or decrease them and could build an economy where everybody benefits.” He emphasized that “only in growth years would sales tax be shared. In other years, it would not.”

The county executive claimed that “the fatal flaw” in earlier requests for county sales-tax sharing was they “failed to account for the fact” that 70 percent of the county’s expenses are mandated by the state or federal government. Focusing solely on diminishing the county’s major revenue source without considering mandates “could lead to the county having to increase debt and/or cut services,” she said.

According to the county, 44 percent of its budget, or nearly $80 million, comes from sales tax and user charges; property taxes account for 28 percent.

Odell did not include raising property taxes as an option for dealing with potential budget holes created by sales tax-sharing.

She cautioned that sales-tax sharing “cannot be counted on as a regular revenue stream for towns and villages, and that funds should be used for infrastructure improvements, not for general budget purposes.”

Philipstown Supervisor John Van Tassel on Tuesday (March 15) called Odell’s endorsement “exciting. We’re happy to be working with them, in coordination with our county Legislator Nancy Montgomery,” whom he said deserves “a lot of credit” for pushing for more county-municipal cooperation. “We’re thankful, very thankful.”