Less than two years ago, Douglas Jackson Jr., of Beacon, and his wife, Michele, were preparing to say goodbye. 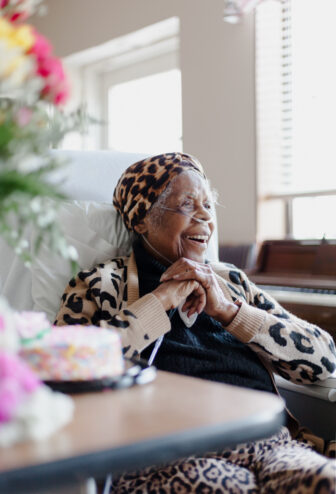 Pocahontas had stayed in her Hammond Plaza condo after her husband of 68 years, Douglas Sr., died in 2018. But she fell in January 2020, breaking both kneecaps, and was admitted to Wingate at Beacon, a senior care facility.

It was at Wingate that she contracted COVID. Pocahontas, who was given her name to honor her great-grandmother’s Native American ancestry, was isolated from friends and family until she was discharged in June 2020.

She moved in with Douglas Jr., one of her five children, and Michele and, for a short time, seemed to be growing stronger until a bout of pneumonia that was diagnosed in July. The family checked her into Montefiore St. Luke’s Cornwall Hospital in Newburgh, where they learned she was still suffering from COVID.

Soon thereafter, “the hospital called me and said I’d better come over for one last visit,” Douglas recalled this week. Upon his arrival, “she did not look good.”

As a last-ditch effort, the hospital administered remdesivir, an experimental antiviral medication that had not yet been approved by the Food & Drug Administration. A week later, she was discharged and back home.

On April 8, Pocahontas Jackson turned 100. She’s currently at the Fishkill Center for Rehabilitation and Nursing, where she’s recovering from having a pacemaker installed in December and recurring pneumonia.

Born in Brooklyn in 1922, her father was a police officer and her mother a dancer at the Cotton Club in New York City. Both died early in her life, so Pocahontas and her two older sisters, Sylvia and Gloria, moved to Hopewell Junction, where they were raised by their grandparents on a farm on Route 82.

Her grandfather worked the farm, bringing produce and meat to sell in Beacon every Saturday in his Model T truck.

The family endured the Depression on the farm, although Pocahontas would say later in life that she never felt she was lacking anything. The girls were educated in the Little Red Schoolhouse, a one-room school built just outside of Beacon in 1830, where she and her sisters were the only Black students. Later, they would attend Beacon High School.

Although her grandmother was Baptist, the children attended the Dutch Reformed Church in Fishkill. But in the early 1950s, at the invitation of the Rev. E. Otis Charles, they moved to St. Andrew’s Episcopal Church in Beacon, where they were among the first Black members of the congregation.

The surrounding neighborhood by that time was predominantly Black, although the congregation was exclusively white. Father Charles invited the family to join the church “to open it up for everyone to come,” Pocahontas said this week.

The congregation was “welcoming, to a degree,” Douglas noted, but after the sisters joined, Black membership began to grow.

The sisters were dedicated churchgoers. “My grandparents saw to it that we came every Sunday morning. We didn’t miss a day,” Pocahontas recalled.

At 100, her memory is sharp and her generous demeanor infectious. When told she would be the subject of a newspaper article marking her birthday, Pocahontas replied: “If I can help in any way, I’d be very happy to.”

She and her sisters worked as teenagers and young adults as housekeepers for two families in Wappingers Falls. Later, Pocahontas was employed from 1957 to 1972 at Bobrich, a Beacon factory that made electric blankets for Westinghouse. From 1972 to 1990, she worked at Chemprene, a company that still manufactures rubber-coated textiles at its Beacon facility.

She ended her career as a school bus monitor for the Beacon City School District from 1992 to 2017. At 94, Pocahontas had hip-replacement surgery. She intended to go back to work as a monitor after recovering, but her husband said “enough is enough,” she remembered, laughing.

Pocahontas said she never considered the possibility of living to 100. “I’ll be darned,” she said. “I never gave it a thought.”

The family hopes she will be discharged and back home within a month or two. “She’s a fighter,” Douglas said. “That’s her personality. She tells us all the time that there’s a reason why she’s here. She wants to know what that reason is.”

If she’s healthy enough, Douglas hopes to take her this year to Louisville, Kentucky, where she has great-great-grandchildren — twin boys born last year and a 2-year-old girl. She’s seen them in photos and videos but never in person.

“And that could be the reason,” he said.