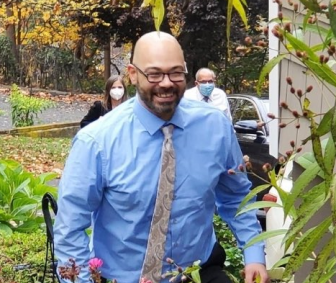 Andrew Krivak after being freed pending a new trial (@FreeAndyKrivak)

The Putnam County district attorney can continue to prosecute the retrial of Andrew Krivak, whose conviction for killing a 12-year-old Carmel girl was overturned in 2019 after he spent 24 years in prison.

Judge Barry Warhit, a Westchester County judge overseeing the retrial because Putnam judges recused themselves, ruled on April 5 that Krivak “failed to establish the existence of a conflict of interest or a substantial risk of an abuse of confidence” if Robert Tendy remains as prosecutor.

Krivak was convicted with Anthony DiPippo in 1997 for the rape and murder of Josette Wright in 1994. He filed a motion in December to replace Tendy with a special prosecutor.

The motion alleged that the district attorney’s office withheld evidence; is pursuing him despite the recantations of three eyewitnesses and the admission by a fourth that she lied about “significant details”; and questioned Tendy’s comments criticizing the county’s $12 million settlement with DiPippo, who sued after being acquitted at a retrial.