Would include a 24-hour hotline for complaints

A firm that makes software to manage short-term rental registrations, regulations and complaints assured the Cold Spring Village Board on Wednesday (April 27) that it was the solution to the challenges it faces.

A representative from Granicus said its product is used by many municipalities, including Dutchess County, to track short-term rental operations. The Village Board voted in July, 3-2, to begin regulating STRs.

Trustee Cathryn Fadde, who along with Trustee Eliza Starbuck researched the company’s services, said it would cost $4,300 for a one-year contract to identify all STR addresses, monitor operator compliance with regulations and operate a 24-hour hotline to handle complaints.

“STRs become problematic for a lot of communities when growth isn’t met by regulation,” said Kester Bonsu of Granicus. “Our data shows that about 10 percent of STR operators voluntarily comply with ordinances, which typically leads to friction in the community.” 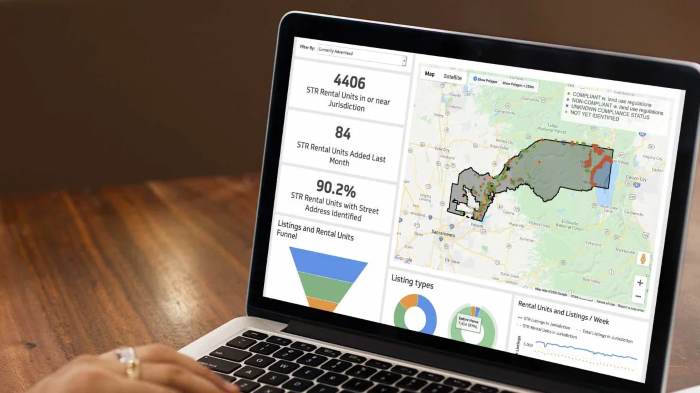 An example of how short-term rental data is monitored by the software. (Granicus)

Bonsu said STRs can be an asset if they encourage tourism but that manually monitoring their operation can be expensive and time-consuming. Most compliance officers go from property to property to confirm STR operations.

Phil Heffernan, who operates a short-term rental in the village, said he thought it might be premature to purchase the software. “It’s awfully expensive, and somewhat offensive in that it employs artificial intelligence to survey our community,” he said. “I’m not sure the company could track occupancies, financial transactions, a lot of things that really aren’t legal.”

Bonsu said that while the monitoring might feel intrusive to STR operators, “it would be completely unreasonable” for a hotel with 120 to 200 rooms to open in Cold Spring but refuse to get a permit or pay taxes.

“You’re dealing with a commercial interest that is active in the community, generating revenue, but not necessarily complying with regulations,” he said.

Bonsu said STR providers are often “less than excited” about helping municipalities manage compliance. “Most STR organizations, such as Airbnb and VRBO, won’t even give you the address of units they have in your community.”

Mayor Kathleen Foley said the village has identified more than 35 STRs operating in Cold Spring but that only four have applied for permits.

Trustee Tweeps Woods noted that the information gathered by Granicus is publicly available. “It’s not a deep dive or FBI search into people’s homes,” she said. “It may seem a bit big-brotherly, but it’s information that anyone could get if they did the work.”

Heffernan asserted that the Granicus software was created for major metropolitan areas such as New York City, not small communities. “I’m not saying this is a bad product, but we have no real experience under an open-permitting program, as opposed to the draconian law proposed by the previous board,” he said. “That has never been tried; just tell everybody, get a permit if you want to do business.”

Bonsu said that typically, only 10 percent of STR operators apply for permits if there is no enforcement — about what Cold Spring has seen. He also said that his firm works with communities that have as few as 10 to 20 STRs.

Foley said using the software would address one criticism of the STR law, which is that it is not based on data. “This is a data set to work from that is neutral and very helpful as we look to improve that local law,” she said.

Foley said a draft of proposed revisions to the STR law should be ready for public review in the next few weeks. She voted against the law in July when she was a trustee on the board, as did Woods. The former mayor and two former trustees accounted for the “yes” votes.

On Thursday (April 28), the mayor said the village has earmarked funds that could go to a contract with Granicus. She said the software would “professionalize the regulation of STRs and greatly expand our capacity for assessing and mitigating their impacts.”