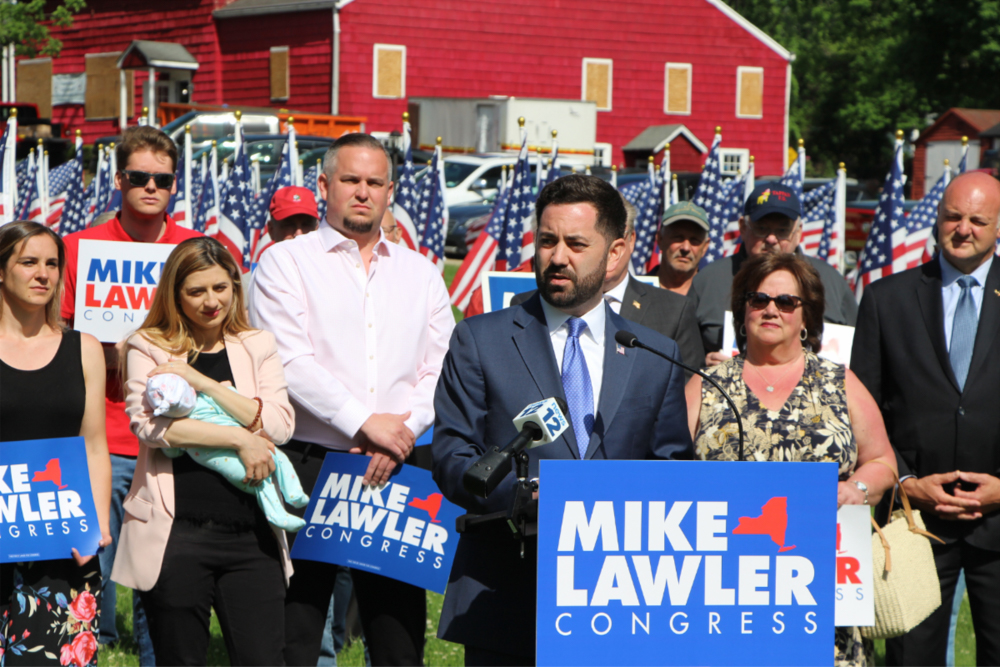 State Assembly Member Mike Lawler, a Republican who lives in Pearl River, announced on Monday (May 23) that he plans to campaign for the District 17 seat. (Campaign photo)

Two potential challengers emerged this week for Rep. Sean Patrick Maloney, a Democrat who plans to run in the newly constituted District 17.

State Assembly Member Mike Lawler, a Republican from Rockland County, announced on Monday (May 23) that he plans to challenge Maloney.

“One-party rule, group-think and a partisan, progressive agenda have destroyed our country and divided our communities,” he said in a statement. He accused Maloney, during his decade in Congress, of morphing from “a self-avowed moderate to one of the most partisan members.”

Maloney, who is the head of the Democratic Congressional Campaign Committee, which works to get Democrats elected, also may face a challenge from within. Angered that he chose not to run for the District 18 seat — which he has held since being elected in 2012 — and leave the 17th for its current occupant, first-term Democrat Mondaire Jones, state Sen. Alessandra Biaggi, who lives in Pelham, in Westchester County, said on Tuesday (May 24) that she plans to challenge the incumbent in a primary that will take place on Aug. 23.

Jones said last week that he would run for the 10th District in New York City rather than take on Maloney.

The new 17th District is considered more safely Democratic than the new 18th. In an interview with The New York Times, Biaggi accused Maloney of hurting the party by not staying in the 18th to “maximize the number of seats New York can have to hold the majority.” Although Maloney lives in Philipstown, which will move from the 18th to the 17th, there is no law that requires a member of Congress to live in the district he or she represents.

Beacon will remain in District 18, where Pat Ryan is expected to be the Democratic candidate.

But first the Ulster County executive plans to run in a special election on Aug. 23 for the 19th District to succeed Rep. Antonio Delgado, who was sworn in Wednesday (May 25) as lieutenant governor. The Republican candidate for the seat is Marc Molinaro, the Dutchess County executive.

The League of Women Voters of New York State on May 18 filed a federal lawsuit to move primary elections for statewide offices from June 28 to Aug. 23.

New York election law requires candidates for governor, lieutenant governor, attorney general and comptroller to gather at least 15,000 signatures from voters in their party to qualify for the ballot. The signatures must include at least 100 each from half of the state’s 26 congressional districts.

Because newly redrawn congressional districts were not finalized until May 20, and congressional and state Senate primaries delayed until Aug. 23, the League is seeking an order forcing the state to restart the petition-gathering process.

State Assembly primaries were not part of a legal challenge to redistricting maps and remain scheduled for June 28.

James Skoufis, a state senator in Orange County whose district would have included Philipstown and Beacon under a set of maps proposed by Democrats but thrown out by a state court, considered a run in the 18th but instead this week endorsed Ryan.

In a statement, Skoufis dismissed what he called Schmitt’s “toxic, demagoguing politics” and alleged that he “actively supported the Stop the Steal rally-turned-insurrection.” He said he decided not to challenge Ryan in a primary to avoid giving Schmitt “any undue advantage in the general election.”