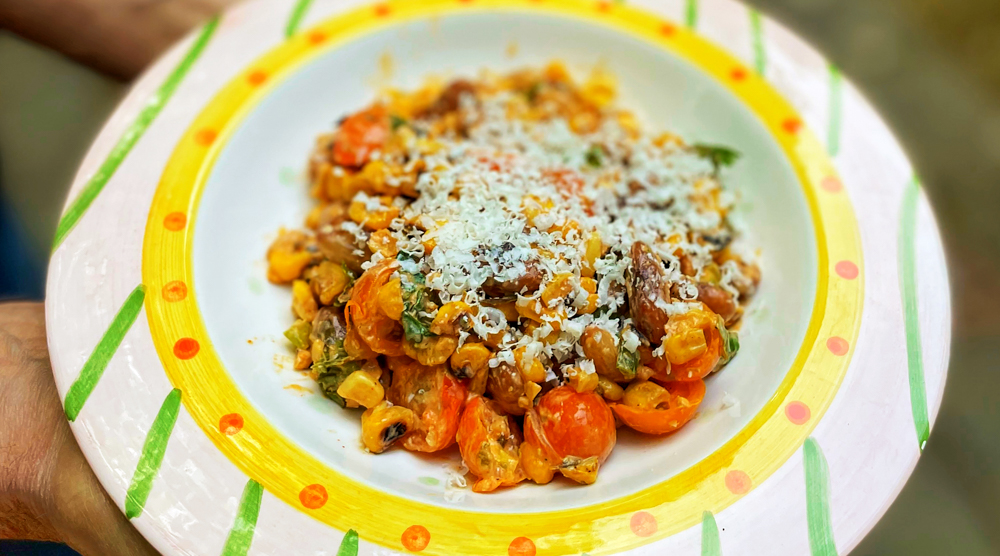 Although the one-two punch of drought conditions and extended spells of heat is putting inordinate stress on summer produce, it’s still corn season and as much worth celebrating, as best we can.

Of course, there’s nothing like an ear (or two) of corn on the cob, as fresh as possible, heated just enough to plump the kernels and augmented only by a pat of butter and pinch of salt. But when supply and conditions are less than optimal, it’s worth considering other options.

Grilling or roasting adds a fragrant smokiness and caramel sweetness to sweet and supersweet varieties. But the drought conditions pretty much rule that out in the here and now.

Esquites is a Mexican word for roasted corn, but it also identifies a street food of grilled or roasted kernels shaved from the cob; mixed with a dressing of mayonnaise, lime juice, chiles and herbs; and topped with shredded cheese. Served in disposable cups (and sometimes called “cup corn”), esquites is a more portable alternative to drippy ears of maize.

Truth be told, no grilling or roasting is required — kernels scraped from the cob can be quickly tossed, pan-roasted and caramelized in a skillet (or my preferred utensil, a wok). Tossed with sliced scallions, minced jalapeños, the simple and foolproof dressing, and topped with a grating of cotija (an aged Mexican cow’s milk cheese), the corn will give you a credible version of this abjectly non-pedestrian snack. And it can be served year-round: It’s as easily prepared with thawed frozen corn.

It’s also the starting point for something a bit more substantial. Here I’ve combined the basic esquites with two other staples of the meso-American pantry, beans and tomatoes.

For the beans, I used beautiful speckled snowcap beans from Rancho Gordo, but almost any medium to large, meaty variety would do. I suggest pintos or cranberry beans and love the other speckled varieties. And while canned beans will do in a pinch, the effort to make your own pays dividends. As for tomatoes, you couldn’t do any better than the currently abundant Sungold cherry tomatoes from Four Winds Farm and other growers.

This more substantial variation also provides a protein bump for vegetarians, as well as offering a side dish for carnivores and piscatarians. It’s great picnic food at room temperature and becomes an excellent platform atop a bed of greens (with maybe a sliced avocado?) for a self-contained dinner salad.

1. Heat oil until shimmering in a large skillet or wok over high heat. Add corn and toss once or twice. Salt lightly and cook without stirring until it begins to char (about 2 minutes). Toss again and stir, repeating the process to char on the second side. Continue to toss and char until corn is well-colored all over (about 10 minutes). Transfer to a large bowl to cool.

2. Prepare the dressing: Whisk together the mayonnaise, yogurt, lime zest and juice, grated garlic and chile powder. Add half of the cheese and stir to incorporate. Salt to taste.

3. Add the beans, scallions, jalapeño and cherry tomatoes to the bowl of charred corn kernels and toss gently to combine. Add the dressing and chopped cilantro, tossing lightly again to coat and incorporate the leaves. Correct seasoning if necessary, and top with the remaining cheese sprinkled over all.

* To differentiate, dried Mexican oregano is much more fragrant than common dried varieties.

** Chile powder is made of strictly dried varietal chile peppers, as opposed to chili powder, which usually contains other spices such as cumin, salt and black pepper. Chile powder will allow you to choose your preferred heat level or smokiness.