Regarding the trail, a linear park that will follow the Hudson River from Dockside Park north to Beacon, Martin had asked: “What is it that Cold Spring needs?”

But the Village Board, members of the Planning Board and public provided less than simple reactions and requests about the trail and the potential impact of the project, which has raised questions among officials and at least some residents for nearly 10 years.

Those concerns are coming to a head. When HHFT releases its Draft Generic Environmental Impact Statement, which is expected by the end of the year, Cold Spring officials and the public will have 30 days to provide feedback.

One of the chief complaints voiced on Wednesday was a perceived shortage of information.

Foley, for example, pointed out that the HHFT’s revised 2020 Master Plan is not available on its website. “It’s confusing to have only the outdated 2015 Master Plan available for most people to see,” she said,

The mayor also said revisions to a scoping document that shows the trail going through Dockside has not been made available. Preliminary plans featured routes using either Fair Street or Route 9D.

Planning Board Member Yaslyn Daniels echoed that sentiment, commenting that the Planning Board has “concluded we don’t have enough information to provide concrete recommendations to the Village Board.”

She and other Planning Board Members raised concerns about a range of issues and bette use of, from the trail’s potential impact on village infrastructure and quality of life to operations, finance and sustainability.

He emphasized the need to protect Dockside Park, which he described as a “fragile” environment that plays an important part in village life, including as host to the Cold Spring Film Society’s summer series. He cautioned that no one can guarantee that the film society will be able to use the space after the state parks department takes over operation of Dockside as part of the HHFT.

“That would be a real loss to the community; it’s a very Cold Spring thing,” he said. 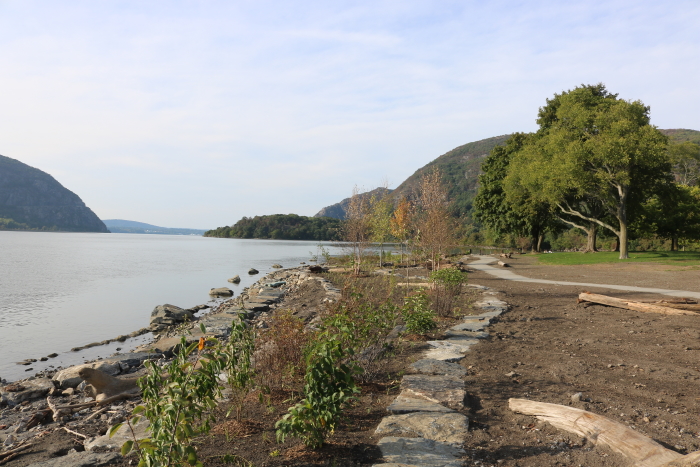 The shoreline at Dockside Park has been fortified. (Photo by M. Turton)

Francisco said that while HHFT operations can benefit from public-private partnerships, there are limitations to what village infrastructure can accommodate.  “There is only one way in and one way out of lower Main Street and Dockside,” he said.

Planning Board Chair Jack Goldstein outlined three questions submitted to HHFT that he said have not been answered: Who owns property along the entire HHFT route? What steps led to what he described as a “counterintuitive” decision that the Breakneck portion of the trail would have an environmental impact? What is the history of use of federal funds for HHFT in the area adjacent to Cold Spring’s National Historic District?

“It became evident that the HHFT organization is not obliged to provide us with that information,” due to the nature of its partnership with the state, he said. “That still remains a concern.”

He focused on “over-tourism” that he said the project could create, an outcome he said results from projects that put “unsustainable pressure on local resources and facilities.” That pressure “can be just as destructive as shoreline flooding,” he said.

Goldstein said that over-tourism can be addressed scientifically. “It’s an opportunity for real innovation,” such as by using computer modeling that responds to evolving factors during HHFT planning.
Goldstein said the village can’t afford modeling, but that state parks could compel HHFT to pay for it.

“The village deserves a tool to help manage over-tourism,” he said. “It is quite clear the project is intended to be a major tourist attraction.”

Foley said some issues, such as a shortage of public restrooms, will be resolved as the HHFT plan proceeds. But she also reflected on something that she said Francisco told her years ago: That Cold Spring has something unique that most places have lost.

“It is our job to protect that,” she said. “We’ve all visited soul-less places that are nothing but tourist destinations. We have an opportunity here, a new public park being developed. How do we do it in a way that’s the gold standard for sustainability?”

Amy Kacala, HHFT’s executive director, said she attended the meeting mainly to listen but acknowledged village officials’ frustration at not having the DGEIS and all data, analysis, traffic and environmental impacts contained “under one nice clean cover.”

“I understand the hunger for that,” she said. “It’s open because we keep looking at more things  and want to be thorough. For example, we’re redoing the traffic counts” to ensure they are up to date.

“Nobody wants more than MJ and I to have that document finalized for public review,” Kacala said. “It’s been slower than any of us wanted, but all of that is forthcoming.”

During the public comment period, village resident John Martin said the project should “spread out” the large number of people eager to hike area trails.

But village resident Michael Reisman asked: “What is the problem you’re trying to solve with the Dockside connector?” — a proposed HHFT section from Dockside to Little Stony Point. “If the problem is over-visitation, will creating a bridge to Dockside help or harm? I’ve seen no evidence it will solve that problem; I think it will harm Dockside.”

Foley noted that the water emergency conservation order remains active, with village reservoirs at about 60 percent capacity. The order applies to all users of the Village of Cold Spring system, including in Nelsonville and some properties in Philipstown. The restrictions include no landscape or garden watering; no car or structure washing; no refilling of pools or hot tubs; limit domestic use as much as possible (full dishwasher and laundry loads; wash dishes from a dishpan, not with running water; turn off faucet while brushing teeth; reduce shower time); restaurants should not provide tap water unless requested; and businesses should use the minimum necessary to operate.