The Philipstown Democrats hosted a rally in Garrison on Sunday (Oct. 23) rather than Cold Spring after security concerns arose.

Critics online objected to the use of a village park for the event and claimed it would attract “Marxists,” “socialists” and “outside agitators.” The Democrats described it in posters and advertisements as a “rally for our rights” and push to get out the vote for the Nov. 8 election. 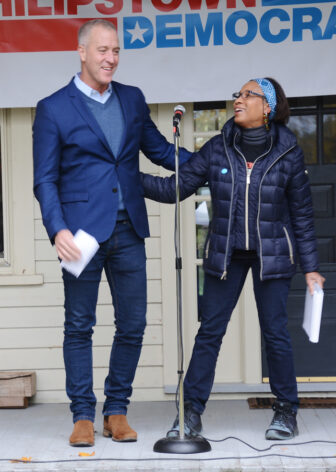 Rep. Sean Patrick Maloney with Janice Hogan, who chairs the Philipstown Democrats, at an Oct. 23 rally in Garrison (Photo by L.S. Armstrong)

Organizers said they reconsidered their plans after hostile reactions appeared on the Philipstown Neighbors page on Facebook and the Cold Spring Police Department took note. “We thank Mayor Kathleen Foley and Officer-in-Charge Larry Burke for their close attention to this matter,” the Democrats said Oct. 22 when announcing the new location.

Foley said on Wednesday (Oct. 26) that the Village Board approved a permit for the group to use McConville Park, and that village officials, including Burke, “made no recommendations about the location.” She added that “officers were fully prepared to manage” security.

When the event attracted negative attention on social media, Burke scheduled additional officers “to ensure it could proceed safely,” the mayor said.

However, the mayor said she asked organizers to pay for the extra officers. Moreover, the event changed from its permitted use when political candidates were invited to speak, she said. “Village taxpayers should not be asked to subsidize the costs of security for a campaign event.”

An image that appeared in promotions for the event apparently sparked the animosity. It featured a bright blue fist, which some Philipstown Neighbors members interpreted as a reference to Communism or socialism. According to the poster, the rally was intended to support “climate action, civic action, abortion rights, voting rights and more.” 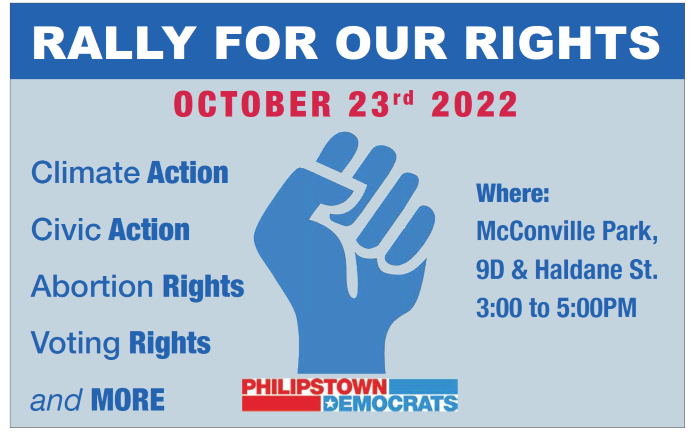 An advertisement for the rally.

Other naysayers predicted the rally would draw non-residents intent on transforming the way of life in Philipstown. “Activists not from the area are going to try to change the school district and community,” one person wrote. “Stand up against their propaganda or they will succeed.”

Someone else cautioned that McConville Park, which includes a 9/11 memorial, “seems to be the wrong place” for a political rally.

Janice Hogan, who chairs the Philipstown Democrats, said social media sniping usually is dismissed as “just people talking.” But when the committee learned of police concerns, it grew wary, she explained.

“Even though we’re a small community,” she said, “we don’t always know how riled up people are and what they may feel that they should do.”

She said a suggestion online that the event would “destroy” the park was “pretty out-there. And it’s exactly the kind of out-there thing that might cause people to do something really stupid. Officer Burke’s concerns were legitimate, and the concerns for the village are legitimate. And it made sense for us to not burden the village in that way.”

So they rallied down the road.