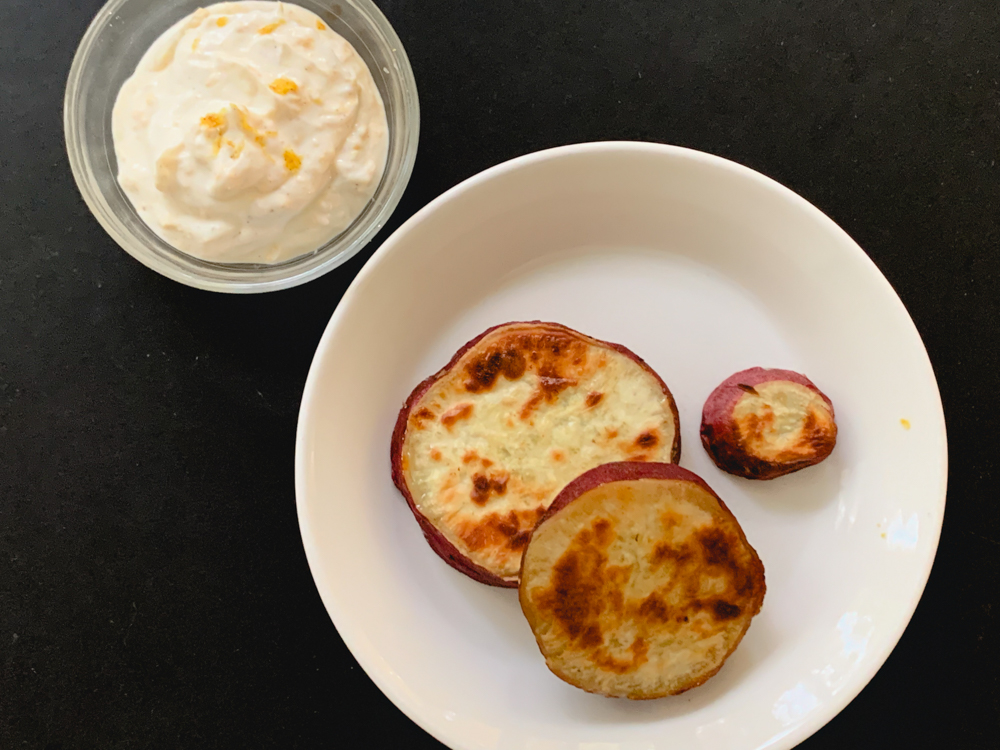 This week’s recipe has become such a familiar part of my autumn and winter days that I hardly think of it as a recipe at all — any more than you would think of adding butter and jam to toast as a “recipe.” However, when I served it as part of a simple lunch spread not long ago, my guests were so delighted with and curious about it that I thought it might be worth sharing.

I first encountered Japanese sweet potatoes at the Union Square Greenmarket more than 20 years ago. A brilliant, Korean-born farmer named Nevia No grew them at her New Jersey farm, now called Bodhitree. Everything she brought to the market was a delectable revelation, each vegetable so lovingly tended and raised that it completely humbled me regarding my own overwrought contributions to the success of my recipes. (I am not alone in my admiration; New York Magazine dubbed her “Greenmarket Goddess” in 2010; Medium compared her farming to an aria.) Nevia introduced many new vegetables to New York’s chefs, and thus to American dining.

It was Nevia who first urged me to try the unfamiliar, deep-purple-red tubers she’d begun to grow. She described the flesh of Japanese sweet potatoes as firm, mild and dry; more like chestnuts than like the cloying, gooey sweet potatoes I’d known in my youth. I was sold.

For the first few years after we moved to Garrison, I would lug her Japanese sweet potatoes up from the city whenever I could manage it. But they’ve caught on — as all good things should, but not all good things do — and for many years now, they’ve been available locally.

I often roast them quite simply, with olive oil and sea salt, and maybe a dusting of smoked paprika, then store them in the refrigerator to snack on throughout the week, or to add to salads and grain dishes. They are a wonderful thing to have on hand on those nights when you’re feeling noshy and dinner won’t be ready quite soon enough.

But they also take well to warm spices — including the so-called “pumpkin spices” (which used to be called pumpkin pie spices because they were added to pumpkin pies, but have now been orphaned from all frames of meaningful reference), which, minus the sugar, turn up in many of the globe’s great savory dishes.

It’s odd that we Americans think of cinnamon, for example, primarily as a partner to sweet treats like apple crisp and snickerdoodles. Around the world, it appears in Mexican molés sauces, Moroccan Ras el Hanout, Indian garam masala and Chinese five-spice powder. Ditto for most of its pumpkin collaborators, including ginger, allspice and cloves.

Some people glaze their Japanese sweet potatoes in honey or maple syrup, but to me that drowns out their natural, gentle sweetness. To the aforementioned smoked paprika, I’ll sometimes add a faint sprinkling of cinnamon. I’ve also tried spice mixes, like curry powder or za’atar. But my new favorite way to eat them is dipped in a sauce of yogurt mixed with orange zest and cardamom and a little salt. Really, I think they are probably good with almost anything.

When I sat down at my desk this morning, I was planning to write about candy or cookies, given that Halloween is looming. But then I realized that roasted Japanese sweet potatoes are my favorite fall cookie, and why not share something I love — my own tricky treat for all you witches, goblins and pumpkin-heads out there. 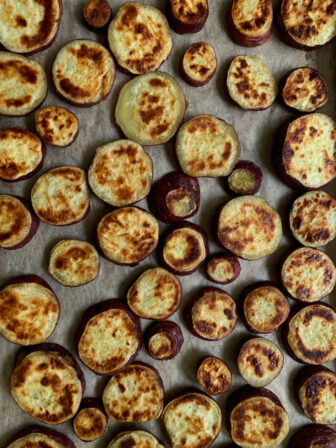 Note: The sweet potatoes are nicest on the day they’re cooked. Although they keep perfectly well in the refrigerator — up to 5 days in a sealed container — they lose their crispness. Note that the skins are tender and completely edible.

Heat oven to 425 degrees. Gently scrub the potatoes. Cut into ½-inch slices and toss with the olive oil, salt and pepper. (They will oxidize and start to turn gray as you slice them; it’s a harmless reaction and will disappear once they’re cooked.) Arrange on a baking sheet lined with parchment or a Silpat, and cook until golden on the bottom, 20 to 25 minutes; if using the paprika, sprinkle it over the slices about 5 minutes before they are done. Serve warm or room temperature with cardamom-orange-yogurt dipping sauce.

Combine all ingredients in a small bowl.