Quinn Chandler, of Philipstown, is the co-author of the parody, Elf Off: The Tragic End to an Elf Tradition. 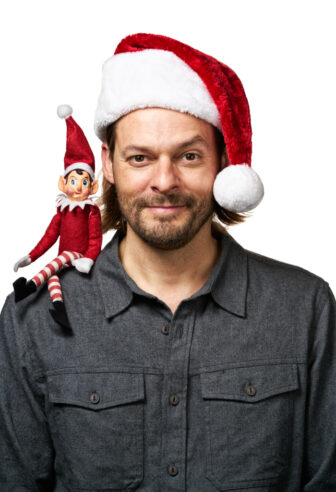 Who is your book intended for?

It’s not suitable for children. It’s a dark comedy for adults who have children and who are annoyed by the Elf on the Shelf. It’s for them.

How is having an elf any different from having a teddy bear in the house?

The elf is usually gifted to you by someone, like grandma. You get signed up for it — it has a kit and instruction manual. You’re supposed to put the elf out every day, starting right after Thanksgiving. He’s supposed to be magical, and he watches children to see whether they’re good. Every night, he flies to the North Pole and reports to Santa. To make it appear he has returned, parents have to move him to a new location. It becomes a chore: move the elf. It gets a lot of parents out of bed.

But it’s so cute. How could a parent dislike the elf?

Because you get roped in when the kids are little and it becomes part of the holiday tradition. The elf gets packed away with the stockings and the kids expect it the next year. It’s another thing you have to do. And like all holiday things — Christmas lights and everything else — parents get competitive. Kids go to school and talk about the elf. When they get home it’s like, “Why does Timmy’s elf give him presents every day?” On social media, you see the lengths that parents go to. If you’re busy, it’s just too much. I can’t compete. We don’t have the elf in our house.

Are you concerned about backlash?

I expect it — I’m amused by how polarizing the elf is; parents have strong opinions, for and against. Because the Elf on the Shelf is so wildly successful, it can take a little ribbing. I’ve had a lot of positive responses from family, friends and other people who love me, although some say the book’s a little too violent. That was surprising, because I thought we pulled our punches — no gore, nothing too over the edge. There’s always a victim in comedy. But you can’t make everybody happy.

In creating your elf, Zippy, did you worry about trademark infringement?
We had to make something different from the actual Elf on the Shelf — emulate but not copy. I tried making the elf myself but it was just a disaster. My wife, Shawna, makes costumes for Haldane and is great at painting, so she made it. But I realized I had to be careful and not ruin Zippy while taking photos. So, I started making elf parts, and now I’m a functional seamster — I know what a bobbin is!

One thought on “5 Questions: Quinn Chandler”