Mayor Kathleen Foley and Trustee Laura Bozzi, at the Wednesday (Jan. 11) meeting of the Cold Spring Village Board, had relatively good news from a recent meeting with Tectonic Engineering Consultants regarding long-awaited repairs to the reservoir dams.

Bozzi said the cost, estimated at $4.2 million six years ago, has increased to $5.4 million, and that the 2016 assessment of dam conditions is valid until 2026.

Foley expressed relief that the increased cost was less than anticipated. “Although it’s a lot of money, its not as much as we were all getting our heads around,” she said.

The mayor said she was also reassured by the firm’s estimate that once the engineering design is complete, the work can be finished in eight to 12 months, “a much shorter window than I anticipated.” That would also be well within the five-year window of the agreement with the New York City Department of Environmental Protection for a connection to the Catskill Aqueduct to provide water to the village during the repairs.

Superintendent of Water and Sewer Matt Kroog reported that seven contractors have indicated interest in completing the aqueduct connection, and bidding opened on Thursday (Jan. 12).

In her monthly update to the Village Board, Putnam Legislator Nancy Montgomery explained why she had voted “no” on a mutual-aid plan passed in December that included an agreement between the sheriff and Cold Spring police. Montgomery said the mayor had not seen the agreement before it was approved, that it is “incomplete” and that it requires “a lot more attention.”

She said that because the plan was marked “confidential,” she could not share it with the Village Board. “Figure that one out,” she said.

Foley confirmed that the plan had not been shared with the village.

“We budget for our police, so it’s important for us to understand” the plan, Foley said. “As far as I’m aware, it was only signed by the previous county executive,” adding that such agreements can’t go into effect until both municipalities sign it.

“It’s a pretty sloppy approach,” she said. “Our Police Department isn’t authorized to enter into contracts with the county.”

Later in the meeting, Foley said she was encouraged after attending the swearing-in ceremony for Kevin Byrne, the new county executive.

“He has been very communicative and supportive,” Foley said, adding she had thanked him for publicly posting vacant commissioner positions. “It’s a real statement about his feelings for the need for expertise in those positions. I feel encouraged that he is casting a wider net.”

Montgomery said while she has been appointed to the Legislature’s Physical Services Committee, her longstanding requests to sit on the Health and Protective Services committees were not granted.

“Despite my [Republican] colleagues publicly stating they would extend an olive branch to me this year, it was just a statement — as always just words,” said Montgomery, who is the lone Democrat on the nine-member panel.

■ MJ Martin, director of development and community engagement for the Hudson Highlands Fjord Trail, announced that there will be a public session at the Cold Spring firehouse on Feb. 2 from 6 to 8 pm, focusing on Cold Spring as part of the trail’s parking and shuttle plan. Attendees will be able to speak with Fjord Trail officials one-on-one in an open house format. Foley urged Martin to extend the invitation to Nelsonville residents. 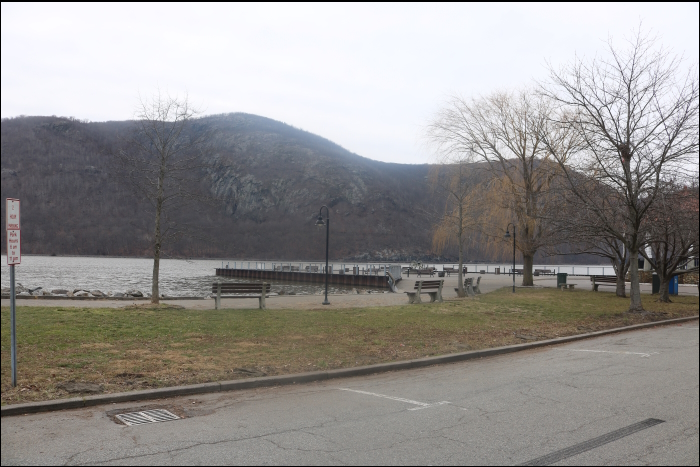 NEW LOOK — Cold Spring recently removed a fence along West Street at the riverfront, opening up the view. (Photo by M. Turton)

■ The Cold Spring Fire Co. answered 23 calls in December, for a total of 205 in 2022. The December responses included nine mutual aids, seven activated fire alarms, two residential smoke investigations, a residential gas odor, an assist to emergency medical services, a motor vehicle crash with injuries, a carbon monoxide investigation and a “good intent call” in which the company is dispatched but finds the problem is not as reported and poses no threat.

■ The Cold Spring Police Department responded to 52 calls for service in December. Officers issued nine parking and five traffic tickets. One arrest was made under the state Mental Hygiene Law which allows officers to detain someone for evaluation if they appear to be mentally ill and likely to harm themselves or others. 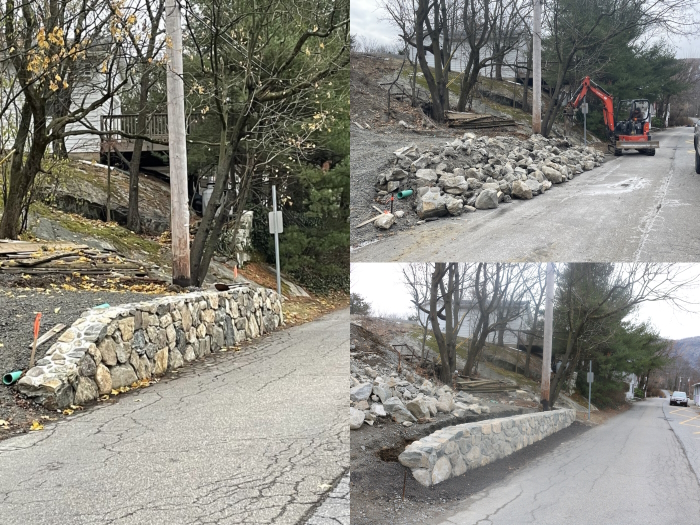 BREATHING ROOM — After complaints, a private wall that was placed too close to the road on Rock Street in Cold Spring had to be destroyed and rebuilt farther back. (Photos provided; most recent photo by M. Turton)

■ The Building Department processed 104 applications in 2022, including 35 title or record searches, 28 referrals to the Historic District Review Board, five referrals to the Planning Board and two referrals to the Zoning Board of Appeals. The department collected $25,069 in fees. The Town of Philipstown has provided building inspection and code enforcement services to Cold Spring since March 31 as a part of an intermunicipal agreement.

■ The board approved a 20-cents-per-hour wage increase for village crossing guards, bringing them to the state minimum of $14.20 an hour. Foley said while the state is on a track to a $15-an-hour minimum wage in the Hudson Valley, it exempts public employees. She said the board wants to set an example by bringing village employees up to the state minimum.

2 thoughts on “Notes from The Cold Spring Village Board”