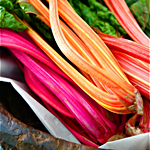 CSA (Community Sponsored Agriculture) is a very good thing — for the farmer and the consumer, but where the farmer’s job—as tough as it depending on the elements—finishes with the harvest, the challenges faced by the home cook and CSA shareholder vary wildly from week to week. (Kale AGAIN, and just what the hell IS that round green thingy?) You can do a LOT of things with tomatoes, but a summer surplus of zucchini and the like can be as much food for jokes as a family.

My friend Deborah’s most recent crisis had to do with Swiss chard—too much, too soon, and too often. While my flippant suggestion to “burn it” was only half in jest, a little playing around by the fire resulted in yet another quasi-Mediterranean take on Hudson River Valley produce.

(NOTE: While it’s too late to take advantage of local CSA for this season, it’s definitely not too early to start thinking about the next. Our local options are Glynwood Center in Cold Spring—which usually has a waiting list localharvest.org —or Common Ground Farm in Fishkill — commongroundfarm.org — which was in need of support this year.)

For the chard and leeks:


For the Olive Vinaigrette:

Preparation:
Bring a large pot (6 qt.) of salted water to a boil.
While the water boils whisk the garlic, olive oil and lemon juice. Set aside.
Prepare vinaigrette: whisk together all ingredients except oil and olives. Slowly stream in oil while whisking until all is incorporated. Stir in olives to finish. Set aside.
Blanching: Cook chard in boiling water until tender, @ 4 minutes. Remove (without draining water) with tongs. Refresh in an ice bath and drain. Perform the same procedure in the still boiling water with the leeks. When fully drained and reasonably dry, toss chard and leeks with oil/lemon/garlic mixture. This can be done in advance.
Grilling: Build grilling fire. oil grill rack. When fire is ready, grill chard stems and leeks uncovered, turning occasionally, until lightly charred, about 6-7 minutes. (This assumes a charcoal fire; if using gas, grill covered.) When done remove to chopping board.
Finishing: Off heat, cut chard and leeks into 1-2 inch lengths. Toss in a large bowl with vinaigrette and serve warm, or allow to cool if preferred.