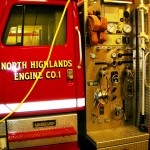 A fire truck in the North Highlands Fire Department, one of four involved in a potential consolidation of fire-fighting forces in Philipstown. Photo by Mike Armstrong

Philipstown officials this month launched an effort to consolidate the town’s fire departments and urgent-response medical units into a new, town-wide emergency services district. The potential merger, outlined at the Town Board’s meeting on July 8, involves immediate formation of a pilot task force-exploratory committee, with select members, to be later expanded into a broader task force representing all the agencies involved.
Currently, the Continental Village Fire Department, Garrison Volunteer Fire Department, North Highlands Fire Department, and Cold Spring Fire Company Number 1 (the village’s sole force, despite its name) operate in Philipstown, along with the Philipstown Volunteer Ambulance Corps and Garrison Volunteer Ambulance Corps. According to Councilman John Van Tassel, a former chief of the North Highlands Fire Department, consolidation “would include all four fire departments, as well as the local EMS.”
He and Supervisor Richard Shea described the merits of consolidation in terms of cost containment, better training, personnel pooling, and similar advantages. “This is an idea that’s been kicked around for a couple of years,” the supervisor said. “Obviously, this is just the very beginning of it. So we don’t want anyone to get the feeling the train is leaving without them.”
In announcing the initiative Van Tassel said the task force’s pilot team would consist of individuals chosen for their unique expertise. To begin, they will operate out of the limelight, given the fact some in the town reject consolidation outright. “Eventually, it’s [going to be] open to the public, but the original pilot group I don’t believe will be public,” he said. Responding to an audience question about allowing public election of task force members to avoid those with bias, Van Tassel answered, “frankly, we do want bias. We want a group that’s enthusiastic about doing it because we think the outcome is going to be beneficial for everybody. In order for this to be successful, I don’t think we can start out with 10 or 12 naysayers. Whether [any] entire department is committed or agreeing to it will be determined later on.”
Overall, Van Tassel said, “I think it’s very important for the people involved in these groups to do the development, to present the model to the town. I think that’s key for success.” Once the work gets underway, the task force will be expanded to include equal representation of the affected agencies, which will pick their delegates and be free to select opponents of consolidation, he said.

The Town Board also wants to produce a study, funded by a New York State grant and conducted by an outside consulting firm. Although a consultant has been lined up, the board hesitates to authorize him to begin, absent the funding, Van Tassel said. “We have been told by the state we were going to be getting the grant,” Councilwoman Nancy Montgomery said. “We don’t have the money yet. We’re still hopeful we will get it.”
“We expect when the State of New York sends you a commitment letter that they’re going to honor it,” Shea said. “The study has to be done.”       Montgomery assured the audience that the consultant would take up his task with no pre-conceived notions about consolidation. “He’s not going to study it with the intent that we will have a district” town-wide, she said.
Both Montgomery and Van Tassel said that while the board waits for the grant, the task force, led by the pilot team, could undertake some of the basic research normally handled by a consultant. The town can “start this task force, and maybe we can evaluate ourselves,” Van Tassel said.

2 thoughts on “Philipstown Launches Effort to Consolidate Fire Departments, EMS, in One District”