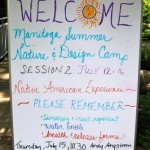 Starting camp can hold as uncertainty for young campers

Camp is supposed to be so so so so So Much Fun, right?  Older kids know this, and can’t wait to hit the ground running (literally) as summer begins.  But for the youngest children, those first-timers, starting camp can hold as much uncertainty as that September classic, the first day of kindergarten.  At Garrison’s Manitoga Summer Nature and Design Camp, each weekly session brings a mix of returning campers and newbies, and sometimes that very first hour of the very first day isn’t all sunshine and smiles.  But, given a few hours of attention from the caring counselors and staff, by mid-morning, most of those jitters are long gone, and, actually, camp is kind of, well, really, really, really, Really Fun. (“Can I come back next week?”).

It isn’t just the smallest campers who are new at this.  This week, which was the second session this season, was Miller Francis’ debut as a counselor.  Like all of the other Manitoga counselors, Miller, a junior at Haldane, had spent years going through the whole cycle: from camper to teen volunteer, and now, finally, as a counselor.  Miller’s first morning concerns were matched by her confidence, “I’m nervous, but Linda [Assistant Camp Director Linda Richards] has trained me really well.”  Between them, the other counselors, Tyler Brownell, Hannah Civita, Jessica Cox, Dylan Culp, and Skylar Francis, have logged decades at the camp.  Hannah alone was returning for the 14th time in her 19 years, earning her the nickname Hannatoga.

The teen volunteers, a group consisting largely of 13- to 15- year olds was full of returnees as well.  Good friends Joanna Orland, Sophia Ortega and Maya Fell carpooled together for years as campers, and have come back once again, this time to assist the staff. Per Maya “the camp has changed a lot, but it’s still got the same kind of feel.”  Joanna added “it’s cool watching the other kids be like us.”  Cold Spring’s Curto family was out in force, with sisters A.J. and Maya volunteering, and younger brother Sam returning for another year of camp.  Sisters Sophia and Olivia Vettella came all the way from Bressanone, Italy to Garrison, where they are staying with relatives.

Camp Director Mark Wick and Linda Richards had an easy rapport with the campers, and found novel ways of stressing the safety rules.  As Linda addressed the group, she described the challenges of not pulling on the poles which support the large camp tents: “the poles are begging for you to swing on them.  You can hear them “don’t listen to them!”

By mid-morning half the camp was away up in the woods, hiking, while another group was playing soccer in a meadow, and the youngest children, by now familiar with each other through break the ice games like ‘the name game’ was engrossed in an art activity, sculpting beads.  Even one of the smallest guys, Owen had changed his tune.  At drop-off he had stated emphatically: “From my old camp, I am tired of walking,”  Maybe, but from the looks of it, he was not so tired of running, jumping, laughing and just generally having a great time at camp.
Photos by A.Rooney

4 thoughts on “The Youngest Campers at Manitoga”