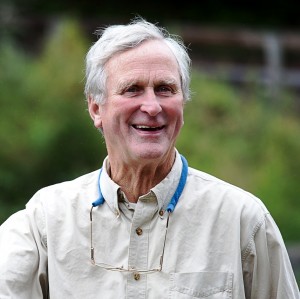 John Adams, former Garrison resident, co-founder of the Natural Resources Defense Council (NRDC), current Chairman of the Board of Trustees of the Open Space Institute (OSI), and long-time environmental steward, has been announced as one of this year’s 15 recipients of the Presidential Medal of Freedom.  His fellow honorees include such luminaries in their fields as Stan Musial, Yo-Yo Ma, Warren Buffett, Jasper Johns, and Maya Angelou. Former President George H.W. Bush and German Chancellor Angela Merkel are also recipients this year.

A release issued by the press office of the White House reads:

(November 17th, 2010) — President Obama today announced that John Adams, the founder of the Natural Resources Defense Council, is to receive the 2010 Presidential Medal of Freedom, America’s highest civilian honor. In announcing his selection of Adams, the President cited a tenure “unparalleled by the leader of any other environmental organization,” and cited a Rolling Stone quotation: “If the planet has a lawyer, it’s John Adams.

Adams, in a statement posted on the OSI’s website, had this response to the announcement:

For 40 years I’ve been privileged to live out my passion, standing up for the natural inheritance that belongs to us all. In receiving this great honor today, I stand on the shoulders of a remarkable NRDC team, and of Americans everywhere, who love this country and believe we share a common duty to safeguard the waters that nourish us, the wildlife that inspires us, the air that sustains us and the land we call home. This is our country. It is ours to cherish; it is ours to protect. That is how we keep faith with future generations. And I thank the President for recognizing this high calling and the contribution I’ve been privileged to make.

John Adams and his wife Patricia began living in Garrison in the early 70s, and raised their children in Philipstown.  They have since moved away, but have never lost their connection with this area. Journalist Keith Schneider, in a recent post in his blog Mode Shift (which “chronicles accelerating transition in American life”), writes: 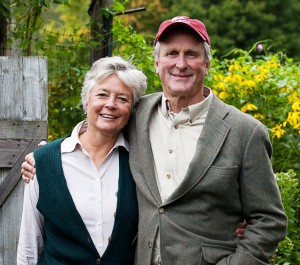 Adams, who like other eminent figures worthy of such distinction, is one of the most approachable and level-headed men you’ll ever meet. As an environmental journalist I’ve been in his company a number of times over the years, riled his staff with some of my reporting, and conducted several interviews. He was always smart, cordial, and friendly. The organization he founded in 1970 is, arguably, the most important environmental advocate in the world now, a green organizational titan with an annual budget exceeding $100 million, and with offices across the country and as far as Beijing.

John and Patricia Adams recently published a book, A Force for Nature, which he describes, on the NRDC website, as about “how we got here, chronicling 40 years of courtroom battles, legislative triumphs, natural wonders, and personal memories.” Nancy Pelosi says of the book, “John Adams was in the thick of all the major environmental battles of the past 40 years, and his account of how the movement grew from a small group of visionaries into a powerful force for change is nothing short of inspiring.”

Many Philipstown residents worked, formally and informally, with Adams on local environmental issues for years, and are full of praise. Lars Kulleseid, of Garrison, who serves on the Board of Directors at the Hudson Highlands Land Trust, provided the following recollection:

John and I worked together for about three years in the late sixties as Assistant U.S. Attorneys in the Southern District of New York under Robert Morganthau, who was the U.S. Attorney.  The Adams family came to live in Garrison in about 1972 as a result of that friendship. They moved into the house that we had been renting from Mrs. Aileen Osborn Webb when we moved into our present house.  Both Morganthau (Fishkill Farms) and Mrs. Webb had set great examples for land preservation.  John’s wife, Patricia, was an important part of the Fish Library and his children spent most of their childhood in Garrison, attending Garrison School and O’Neill High School.

NRDC was young then, but John was already well known for his tenacious approach to healing and preserving the environment.  John was also — and continues to be — head of the Open Space Institute, which has had a huge impact locally in providing public spaces such as Philipstown Park. We are lucky to have John in that role; he inspired many people then and continues to do so. 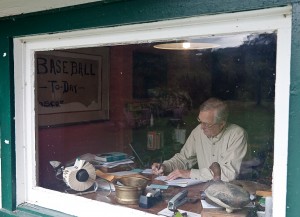 Adams working at his desk

It has been a privilege for our family to know John for 40 years. Thanks to NRDC, the OSI and working with local, concerned groups, John has picked up the banner of John Muir, William Burrows, to name a few, and preserved for our future families one of the truly great wonders of beauty and nature. Europe has its cathedrals and monuments.  We have as our treasures the parks, forests, fields and the Hudson Highlands.  Thanks be to John.

Former Town Supervisor Bill Mazzuca spoke of Adams’ involvement with the donation of OSI property to the Town:

John was very, very instrumental to the conversion of [part of what was] the Capuchin monastery to the Community Center.  John was one of several people involved.  I found when working with him that his concern was always what would be best for Philipstown.  I’m not sure everything would have gotten done without his support and prodding in the background. It took a while, while part of the property was divided off from the Garrison Institute, and that’s where John was very helpful in bringing people together.  It was a long process – we were allowed to use the property before it was officially turned over. A lot of it was John, in the background.

Cold Spring’s Lynn O’ Malley, who brought this news to the attention of Philipstown.info, had this to say: “I worked for John in the 1980s and, even then, we knew NRDC was making history under his leadership. He is strategic, passionate, and determined, with a remarkable ability to build loyalty among staff, donors, and allies.”

A close friend of John Adams, who preferred not to be identified, said that: “All of us, friends of his from Garrison, are terribly proud of him and thrilled that he got this honor.”

An excerpt from a recent, published letter from Adams to the OSI constituency reads:

But the time has come when we must widen the lens through which we see the natural world.  Just as countries and continents are linked more than ever by the exchange of goods, services, and knowledge, people in distant places increasingly share a common environmental future.

The need to protect natural resources connects us all; political boundaries make little sense when it comes to watersheds, river networks and forests.  In this age of climate change, melting ice in the Arctic can alter landscapes in the tropics, and energy choices can shift weather patterns worldwide.

2 thoughts on “John Adams Receives the Presidential Medal of Freedom”