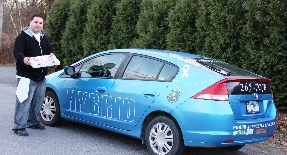 The bumper sticker reads :”Think globally, act locally.” The environment is probably the last thing on someone’s mind when hungry and ordering a pizza, but in Cold Spring the pizza delivery car that bears that bumper stickerpractices what it preaches. Angelina’s Restaurant uses a Honda Insight, a hybrid, to deliver its food orders. Hybrids run on two motors, a standard combustion engine and an electric motor powered by a rechargeable battery. The combination of gas and electric technology results in increased gas mileage and lower engine exhaust emissions.

For Angelina’s owner, Kamel Jamal, the decision to acquire a hybrid was as much a business strategy as it was an environmental statement.  “Honestly? I did it for marketing,” Jamal says. “The environment is an important topic to a lot of people. It needs to be addressed.” Public reaction to the hybrid has been very positive and while he can’t put an exact figure on it Jamal is convinced that it has increased pizza orders. “People love it,” he says. He sometimes parks the vehicle in front of his other business, The 123 Stop Deli on Route 9. “It’s great cross-promotion.” As a mobile billboard the metallic blue Honda is hard to miss. The word “HYBRID” is stenciled in giant letters on both sides of the car. “I get a lot of thank you’s from people. One woman came up and gave me a big hug when she saw we were using a hybrid,” Jamal said.

While it has helped business, Jamal does not downplay the environmental aspects of hybrid technology. And it has affected him personally. “Because I use a hybrid I’ve met people who know a lot more about the environment. It has educated me. It changed my perspective. I even downsized my personal car.” When asked if he would recommend the hybrid to other business owners Jamal laughs at first and says, “No! I want to have the only one in town!” But a moment later he says: “When people see that a local business is not a follower but can lead by example — maybe it will drive other businesses to do the same. In a nutshell I’d tell them that using a hybrid is a no-brainer.”

The savings add up for a restaurant that according to Jamal makes approximately 80 deliveries a week. “We save about $150 a month on gas — the hybrid gets about 35 miles to the gallon of gas when driven locally.” The vast majority of deliveries are very local with the furthest being to East Mountain Road South and Lake Valhalla. Jamal estimates that the car travels about 15,000 miles a year. Jamal says that his employees are equally happy with the hybrid. “They love it. No one wants so use their own car. And this way they don’t complain about longer deliveries because they’re not buying their own gas. They can make more money — their tips mean more.”

By providing the hybrid for deliveries Jamal says he also gets “to pick and choose” who works for him. “I don’t have to rely only on people who have their own vehicle. There a lot of good kids out there who don’t have a car.” Jamal does require that drivers be at least 18 years of age. “They’re a bit more responsible and accountable.” One driver, Ronnie Mazzuca, is considerably more than 18. However Jamal declined to divulge his senior driver’s exact age. “He is such an asset to the business. We learn something from him every day.”

Angelina’s hybrid is one year into a three-year lease, a cost that can be written off as a business expense. Kamal doesn’t know what he’ll do when the lease expires. “You never know what direction things will go in three years. Diesel maybe? A hybrid convertible would be great for promotion but I’m not even sure they make one. But if we can put a man on the moon.”

Is there a downside to using the hybrid? “There’s a downside to everything,” Jamal says. “It’s an added expense but it’s worth it. Liability is always an issue — but it’s an issue whether I provide a car or not.” He says the fact that the hybrid is lightweight is not an advantage during Cold Spring’s snowy winters. “I have to put snow tires on it.”  Always the promoter, Jamal likes to point out one feature on the hybrid that evokes many public comments that have nothing do with gas mileage, the environment or electric motors. The license plate reads “8slices.”

2 thoughts on “Hybrid Pizza Anyone? Good for business …and the environment”