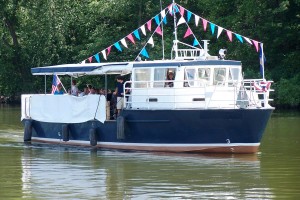 Can an unnamed 44-year-old former Coast Guard boat find a new home and identity at the Cold Spring waterfront? Capt. Mary Pat Driscoll thinks so and on Tuesday night she presented her ideas to the Cold Spring Village Board and a roomful of attentive listeners. Driscoll, a former Coast Guard reservist who’s skippered tour boats from Kansas City to Cincinnati, New York Harbor, and Rhode Island, bought the ex-Coast Guard buoy tender this October. Already familiar with it, thanks to its recent incarnation as a tour boat on the Erie Canal, she wants to moor the vessel “permanently – except winters – at the Cold Spring dock. In return, she proposes to pay the village $1,000 a month, for an annual total of $5,000 for a shorter season in 2011 (as the boat gets prepped and moved) to $9,000 after that.

“I’m very excited about bringing it to the Hudson River. I’ve fallen in love with this section of the river,” said Driscoll, of Trinity Cruise Co. Beyond that, she said, “You have a very great position here, having a pier that is in working order, that has some depth to it, and that is open and willing for a boat to come.” After shipping declined, towns often abandoned their riverfronts and “many of the other villages don’t offer the great things you have here – a real, vital little downtown community, a working pier. This is a really great place for a tour boat to run cruises on what I know, you know is the most beautiful section of the Hudson River.”

As outlined in a written proposal and her comments Dec. 21 to the board and public, she wants to offer cruises on the 46-foot, 42-passenger boat to Foundry Cove, Constitution Island, West Point, Fort Montgomery, Bear Mountain, Storm King, Bannerman Island, and other possible venues. Programs would include outings for school children, such as those studying New York and Revolutionary War history or ecology; tasting tours featuring area wines and cheese; tours with picnics at scenic or historic locations; two-hour morning cruises, and similar options, with a base tour price of $18 to $20 for adults (less for senior citizens) and $45 for a two-hour luncheon cruise. For the trips providing food,“I intend to make use of as many of the local restaurants as I can,” through catering and other arrangements, she said. Despite the latter potential, though, as she explained it, the yet-to-be-christened vessel would not be a “party boat” but one oriented to low-key tours, often with an educational component. “This boat is a great place to study, for kids,” she told the board. Likewise, it would offer employment possibilities to local residents, she said.

“I’m kind of excited about this. I just think it would be a real asset to the community,” Mayor Seth Gallagher concluded. “I think it’s good for business; I also think it’s good for people who live here.” Questions arose about the merits of providing a permanent berth, parking for tour-boat riders, partnerships with the village government in dealing with infrastructure, and ensuring that the boat is not obtrusive. “One of the main draws for us is the view,” Trustee J. Ralph Falloon said. “I think the tour’s great. I don’t know if we’re ready for a full-time boat sitting there.” However, he suggested “partnering with others, maybe there’s a way” to keep the boat temporarily at Constitution Island, West Point, or another nearby waterfront location. “If you’re bringing tours to other places, there’s no reason they can’t share some storage.” Driscoll promised to pursue arrangements to dock at another pier as needed and to work with the village to accommodate everyone, deal with water and sewage concerns, and prevent blockage of the view from the dock. “The boat itself is going to be attractive to look at,” the mayor said.

“I think it would be a marvelous opportunity for all of us,” said Betsy Pugh, chairperson of the Constitution Island Association. She predicted that her organization “would be more than pleased to have a working arrangement with the Village of Cold Spring. And we would do our best to help Mary Pat with West Point and the harbor master to be sure the docking at the island and the cruises going in and out would not be difficult or unwieldy.” Part of the U.S. Military Academy at West Point, across the river, Constitution Island contains Revolutionary War fortifications and the historic Warner house. The Constitution Island Association helps protect and maintain the site, located just south of Cold Spring.

Trustee Bruce Campbell, commodore of the West Point Yacht Club, likewise said he believed West Point would be amenable to cooperative activities. Tom Rolston, owner of the Depot Restaurant, was among audience members who pointed out that having a local tour boat has been suggested off and on for some 20 years. “It sounds like a good idea, I mean really good,” he said. To the notion that the boat could pose vehicular parking problems, he responded: “Parking is not a problem in Cold Spring.”

“You saw the 4th of July,” Gallagher commented. “We had 5,000 – 7,000 people here and everyone got a parking space. They seem to find parking. You can’t stop business for parking, either.” He also described the boat as a means for “bringing people without cars, to come and spend money.”  Audience member Dan Wright remembered visiting waterfront villages in California that resemble Cold Spring and benefit greatly from such attractions as tour boats. “I speak in complete favor of this proposition,” he told the mayor and trustees.

Although the dock could handle the boat, since “structurally we’re good, it would require a change in the [village legal] code,” Gallagher said. At present, only boats that visit for a day or overnight, such as the historic fireboat, are permitted to use the dock, he said. He promised to confer with the village attorney on updating the law. After taking an informal tally of the board, he told Driscoll and the audience, “It’s a very positive reaction. We haven’t taken a vote, but I think we think this is a good idea.”

Anzevino noted that another key premise “is to bring together the development and the environmental interests to see how we can solve problems together for healthy, vibrant communities that are good for the economy and protect the environment.” He referred to Cold Spring as “probably one of the most scenic, walkable communities on the Hudson River” and urged the Village Board and citizens to consider how the six principles might apply locally. “It’s not a one-size-fits-all solution and any of the recommendations have to be vetted by the community to see what works,” he said.  In planning for riverfront communities, he added, “it’s really all about connections, and I think the thing about connections is to be creative.”

Before turning to more mundane matters, such as approving minutes and bill payments, the board also authorized the mayor to finalize the $49,900 contract with the Town of Philipstown for having the Cold Spring Fire Company provide service to parts of the town from Jan. 1, 2011 through Dec. 31, 2011.