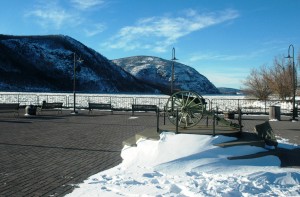 The Cold Spring dock on a quiet winter day

After a sometimes-contentious public hearing Tuesday night (Feb. 8), the Cold Spring Village Board postponed a vote on a proposed new law allowing commercial boats to moor at the village dock. It scheduled further review for Feb. 22 and a possible action on March 8. The delays leaves adrift the request by the owner of a former Coast Guard boat to moor for extended periods each year and give tours from the Cold Spring waterfront.
Allowing boats to pay a fee and moor for “a day or days,” the draft law would replace a current provision that only authorizes unique vessels, such as historic boats, to stay for short periods, at no charge. When determining whether to grant a permit, the board would have to consider the availability of docking space, number of other vessels docked on the same dates, and whether the applicant boat “presents any hazards to health, safety, and welfare or would otherwise be detrimental to use and enjoyment of the Waterfront Park.” In addition, the proposed law bans cleaning of boats below the waterline; sandblasting, power sanding and painting; and dumping of garbage, sewage, oil, or other refuse into the Hudson River, exacting a fine of $250 a day for violations. Even many of those against the change in law said they favored opening the dock to more river traffic — under proper circumstances, anyway.

The critics raised concerns about pollution — including possible cadmium waste contamination; noise, traffic congestion, infrastructure problems, and changes to the look of the waterfront. Proponents, including Mayor Seth Gallagher, cited economic advantages, enhancement of a “living riverfront,” opportunities for villagers as well as visitors to enjoy the waterfront more easily, and other boons.
Former Trustee Gordon Robertson led the charge against the proposed law, claiming that unless the current Village Board members know nautical knots and demonstrate other maritime abilities, they lack expertise to make decisions about docking boats. “Who has the expertise here, that believe they have the expertise in nautical maneuvers, navigation, to be able to open up the dock? You need some people with expertise, I believe, not the five of you,” he told the board. “Do you know the most common knot tied if you’re a sailor?” He advocated preparation of a long-term plan for the dock before making changes. “The river is an asset. It’s one of our only commodities that we have,” he said. When the law was revised in 2009 to allow non-profit boats to dock on special occasions, residents “were very concerned about traffic, about effluent coming out.” Furthermore, if the Village Board is focused on the ex-Coast Guard venture, it is not proceeding correctly, he added.
Greg Phillips, who runs the village water and sewer departments but spoke as a private citizen living close to the waterfront, expressed opposition, giving as reasons impositions on waterfront-area residents and those who enjoy the present view. If commercial boats use the dock, “you’re looking at somebody’s business,” not the scenery, he said. “I’d like to see this voted down.”
Resident Peter Henderson voiced the opinion that “it would be great to have that boat offering tours” but questioned the ability of the current infrastructure to handle such ventures. “Put the dock before the boat rather than the boat before the dock,” he said.

‘Permission to give permission’

Gallagher said that the ex-Coast Guard boat, like any vessel “will go through a whole separate vetting. If this law passed, it doesn’t mean that boat gets to be there.” Also, he assured the audience, “I don’t want to limit it to one. That’s not beneficial to the village.” However, he said, the law needs to be in place before the village can entertain options. “It’s very difficult to talk to people about having a business here if the law says that they can’t. First you have to establish you actually want them there. Then you have to figure out how to do it.”
“This law only gives the right for we, the village, via the Village Board, to give permission to somebody to dock,” said Tom Rolston, owner of The Depot Restaurant and a long-standing supporter of bringing more boats to the waterfront. “The argument is not whether a specific boat is coming in. This is only permission to give permission.”
“Exactly,” Village Attorney Stephen Gaba concurred. “I think there’s a misconception here. The local law that’s being considered does not open up the dock. It just changes what’s on the books now to give more discretion to the board so they can work out what they need to do to allow docking to the extent that they feel is a good thing for the village.” He noted that “the dock has been in place for some time but only in the year 2000 had “the village adopted a law which blanket-prohibited all docking along the Waterfront Park, including at the dock.”
“I think the change in the law that expands the Board’s discretion is a very positive thing,” Stephanie Hawkins, another village resident said. “Expanding the Village Board’s discretion means that our elected leadership gets to speak for us.” The public can comment and make suggestions at public meetings, she told the mayor and trustees, “and you act on that at your discretion.”
Ray Fusco, who lives on Market Street near the waterfront and serves on a steering committee for harbor operations, navigation, and safety in the Coast Guard Sector of New York, which extends to Albany, called the proposed law “very prudently written. I think it would be very beneficial to have something like this. There’s already a very strong mechanism for control in it,” he said. “The Village Board has the control to either issue the docking permit or not.”

Fears of cadmium contamination
Henderson, Robertson, and Jan Thacher, a photographer and kayaker, also raised the issue of hazardous pollution. Henderson said that when a former battery plant dumped toxic waste, “both the [Foundry] cove and the end of the dock were highly contaminated.” He advised the village to consult the federal Environmental Protection Agency, N.Y. State Department of Environmental Conservation, and agencies other before taking action.
Robertson expressed fears for the vulnerability of the dock, “which is containing a lot of contaminants.” He referred to “the cabling inside, that stress, to hold the dock in, because of all the contaminated stuff inside. We need to protect it.” Thacher said that the dock was designed for passive use and intended to contain the dangerous cadmium once dumped by the battery factory.
Gallagher said that the village already has consulted the various state and federal authorities. “We actually have addressed that stuff. The dock is designed to be able to handle boats. And we’ve had it checked out by engineers,” he emphasized.
Betsy Pugh, of Rock Street, expressed disappointment at an apparent attitude among some that Cold Spring is incapable of surmounting obstacles. “I hear a great deal of negativity. I would love to hear the conversation turn more towards `we think we’d like to do this, how can we do it?’ and not all these specific reasons of why it’s bad, or wrong, or smelly, or whatever. I really would like to see a more positive tone.”
Anne Impellizzeri, a  resident speaking as such —  and not as vice chair of the Special Board for a Comprehensive Plan-Local Waterfront Revitalization Plan — told the Village Board that “it sounds as if you have considered a lot of the potential issues: the noise, the pollution, the disturbance. The idea of reviewing each one at the permitting process makes a great deal of sense,” she said. “So I think it is basically a very positive idea to enhance the living waterfront.”

Possible revenue of $10,000 or more
Gallagher referred to the revenue potential. “Right now we can’t charge boats that come. If we can open it up, we can charge boats and we can see about using those costs to cover any of the infrastructure.”  On the conservative side, he estimated revenue of $10,000 a year. “It’s clear it’s a huge net benefit, as opposed to any kind of loss, because we are not going to put our own money in to do those things,” he said.
Robertson wondered why the Village Board couldn’t use the current law and regard commercial boats as boats of special interest. As for the proposed law, “I don’t understand the language, why now, and what it is attempting to do,” he said.
Rolston advised him to “stop all the mumbo-jumbo, Gordon. Get to the facts,” adding that the current law “was written for the Clearwater,” the environmental education boat.
“It was written for the residents,” Robertson retorted.
After the public hearing closed, Trustee J. Ralph Falloon suggested that it would be good to hear from some of those residents again before the Village Board acts. “I think it’s only fair to each person that spoke here to get their input again — what they said and why they said it,” he told his colleagues. “I’m 110 percent in favor of this dock being opened for everything. We’re saying we want this one thing here, but ready for her [the tour boat]. In my opinion, there’s no infrastructure at our dock.” He noted that even those critical of the board’s initiative generally favored the concept. “There was hardly negativity about this issue. I think there’s a lot of ideas we can harness. I don’t want to rush. I also don’t want to play the political game and push it off until it’s a year from now.” He proposed further efforts on “whatever we need and get this thing as close to ready for the summertime” as possible.
“I think there are too many things that were brought up to bring this to a motion” to approve the proposed law now, Trustee Bruce Campbell said. The board then unanimously voted to delay any decision, with further review in two weeks.
Photo by L.S. Armstrong