Old computer slang for garbage-in, garbage out, GIGO also might define Philipstown’s current trash collection practices — household garbage tossed in waste-removal trucks goes out for disposal, at both economic and environmental costs. So last Wednesday, the Town Board learned about a SMART alternative, a way to Save Money and Reduce Trash. One SMART possibility: a PAYT, or Pay-As-You-Throw program to give a financial break to residents who practice recycling, including composting, while making non-recyclers pay more.
According to information from Mary Rice, environmental health educator for solid waste and recycling in the Putnam County Health Department, through PAYT a municipality charges residents for collection of municipal solid waste, or MSW — household garbage and trash — based on the amount they throw away. Thus someone who puts bottles, cardboard, metal cans, paper and other reusable goods into recycling and turns food scraps and other organic materials (like plant cuttings) into compost would produce much less trash for the garbage truck, paying less than a refuse recalcitrant who tosses everything into the trash to be hauled away. Various SMART and PAYT models exist, but a simple method is for a municipality to charge all residents a relatively low user-fee and to sell municipality-approved trash bags at local stores. Only the approved bags could be used for household garbage and garbage truck operators would not pick up trash in other bags. (As a variant, a community can allow residents one full trash container per week, with residents only paying for whatever additional bags they put out.) 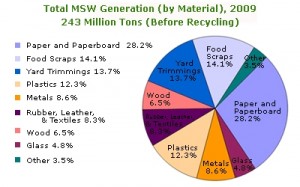 “The cost of the bags is the surcharge for the MSW,” Rice explained. “And all the profit would go to the town.” Under PAYT, residents who generate a small amount of garbage would pay little above the basic fee while those who put out lots of garbage would have to buy a lot of bags. “That puts the cost burden on people who are not recycling,” Rice said. Recycling would be picked up at no extra charge to residents. PAYT “makes a whole lot of sense for everybody involved,” Rice told Supervisor Richard Shea and Councilors Nancy Montgomery, Betty Budney, John Van Tassel, and an audience of four (including the press). “You are charged only for stuff that cannot be recycled,” Rice explained. “Residents are charged for actual use. It’s going to be an individual choice” and recyclers are “rewarded for the waste reduction.”
“It really facilitates all the recycling being done,” North Highlands resident Dave Vickery agreed.
Recycling represents value because “it can be sold. It can be reclaimed and re-used,” Rice said. Even small and large appliances or wading pools and other plastic children’s toys can be recycled, she said. In comparison, “garbage is garbage,” trash that cannot be re-used and costs a town money to get rid of, at a relatively high price. Budney noted that until the town initiated a new recycling system last year, “we were paying for everything to be taken away” but that now a load of recycling sells for $20 to $25 a ton. Because Cold Spring and Nelsonville provide trash collection within their boundaries, a Philipstown PAYT system would not apply to them, unless villages and town merged their collection operations.
Rice said that as the county began looking at garbage collection across Putnam, one thing that leapt out was the disparity in costs town to town, even without any town participating in a SMART program. She noted that in the Town of Southeast, with a centralized collection program, residents pay about $22 a month. However, in Philipstown, with no comprehensive system (outside the villages) and reliance on separate garbage haulers, costs run far higher, for comparable service.  Supervisor Shea
“You guys have a real incentive” for more centralization and a SMART PAYT approach, Rice said. “I can’t believe how much you are paying for garbage.” Distributing background materials from the U.S. Environmental Protection Agency and county and case studies from other municipalities in the Northeast, Rice acknowledged that towns often face public reluctance when they propose PAYT. Once local citizens understand the economic and other advantages, though, doubts disappear, she said.  “I can’t understand why there’s resistance, because to me it makes so much sense.”

2 thoughts on “Town Board Learns about SMART Garbage”