The visiting tugboat Cornell attracts attention at the Cold Spring dock in summer 2009.

After five months and several contentious discussions, the Cold Spring Village Board Tuesday night (May 17) passed a new law allowing the docking of commercial boats at the Hudson River waterfront. Although covering a wide range of watercraft, from canoes to barges and ships, the new legislation essentially addresses a village desire to welcome — and gain revenue from — moderate-size tour boats. Possibilities include excursion riverboats, West Point boats bringing visitors across the water for a day, and the former Coast Guard buoy tender whose owner’s request last December to moor at the village dock galvanized efforts to change the law. The new provision makes it possible for authorized commercial vessels to stay for a “day or days” at a time, while the previous version limited dock mooring to short-term stays by unique vessels, such as historic ships operated by non-profit groups. To take effect upon formal filing with the New York Secretary of State, the new law directs each commercial boat to obtain a permit, granted by the Village Board on a case-by-case basis for a fee.
On Tuesday, the board deferred action on the amount of the fee, though one idea, offered by Mayor Seth Gallagher, is $1 for every foot of the vessel’s length. While seemingly modest, “that will still add up over time,” Gallagher said. “You don’t want to make it a disincentive.” The ex-buoy tender’s captain, Mary Pat Driscoll, who wanted to base her boat at the Cold Spring waterfront from spring through fall, had suggested a charge of $9,000 total, or $1,000 a month.
Proposed in December, and the subject of often-heated public debate over the ensuing months, the new law won approval 4 to 0, with little ado. Trustees Bruce Campbell, Charles Hustis, and Airinhos Serradas joined Gallagher in voting to adopt the new law. Trustee J. Ralph Falloon could not attend the Tuesday meeting. When determining whether to grant a permit, the board would have to consider the availability of docking space, number of other vessels docked on the same dates, and whether the applicant boat “presents any hazards to health, safety, and welfare or would otherwise be detrimental to use and enjoyment of the Waterfront Park.” In addition, the law bans cleaning of boats below the waterline; sandblasting, power sanding and painting; and dumping of garbage, sewage, oil, or other refuse into the Hudson River, exacting a fine of $250 a day for violations. Moreover, the law allows the Village Board to revoke a permit and remove any boat that violates its law.
An audience member wondered if the Village Board could eject an offending vessel immediately. “The Village Board would have the power to do that,” at least once the board members could be rounded up for an urgent meeting, Gallagher replied. “This law wouldn’t restrict us. They can only dock with the knowledge and permission of the Village Board” and as long as they obey the law. Another attendee asked if the village dock could handle commercial traffic. Capt. John Panzella, owner of the New Orleans paddle-wheeler River Rose, which offers dinner cruises and sight-seeing, assured the audience of the dock’s capabilities. The boat has visited Cold Spring and he said he hopes to bring the River Rose back more often — “as much as I can,” as long there’s harmony among all involved. After years plying the Hudson, he said, “I would classify the Cold Spring dock as one of the better docks on the river.” 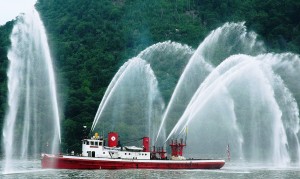 On a closely related subject, the mayor and three trustees also approved a permit for the historic John J. Harvey fireboat, a periodic visitor to Cold Spring, to moor at the dock on Sunday, May 22, from 3 to 5:30 p.m., with the public welcomed aboard for free tours, and to stop again on Friday, May 27, to pick up and drop off riders.

Farmers’ Market return to Butterfield May 21

Turning to other business, on behalf of the Cold Spring Farmers’ Market, the board ratified a new contract with owner Paul Guillaro of Butterfield Realty LLC for use of the old Butterfield Hospital grounds for the 2011 outdoor market, which begins this Saturday (May 21). Represented by the village government in such legal matters, the Farmers’ Market will pay Guillaro $1,200 for the season, which ends Nov. 20. The agreement quells rumors that the market might move to the Metro-North train station parking lot this year.

The board likewise approved a request from Network Movie to film a German made-for-TV drama on Main Street for one and a half days in July. The film, part of a family-oriented, general-audience series about “women overcoming obstacles to achieve their dreams,” is to be telecast on ZDF, the national German network, according to Kat Delaney, a Network Movie agent and location manager for its partner, VWI Productions.  After filming elsewhere in the area over the past few years, the German company “is back in the Hudson Valley and eager to capture its beauty for foreign audiences,” Delaney wrote to the village government. “We are looking for a town that embodies the Hudson Valley and American life.  I am hoping the Village of Cold Spring could be this place for this film.” Deciding that the village could, the board approved the request, at a fee of $5,000 for the full day of shooting and $3,000 for the half day.

The board began its meeting with a briefing from Noah Nadelson, of Munistat Services, regarding ways to finance major infrastructure projects involving the water system and Cold Spring firehouse. In 45 minutes thick with talk of bonds and BANS (bond anticipation notes) and 20- versus 30-year obligations, the board took a preliminary look at options available over the next several years. “I commend you for doing this,” Nadelson told the mayor and trustees. Unlike Cold Spring, before making a major decision, “a lot of places don’t dig in enough” to do the necessary advance study, he said.

When the board approved an infrastructure cost far below what fixing the aging water system or firehouse might cost, it drew an objection from the audience. As part of a renovation to refit the village meeting hall as a courtroom, Justice Thomas Costello proposed spending about $4,030 on new carpeting. The board agreed, prompting an outburst from Tom Rolston, local restaurateur and resident. “I didn’t think that in depression times we need to be so elegant,” he said, characterizing the board’s attitude as “spend, spend, spend — the taxpayers will pay for it!”
Photos by L.S. Armstrong