The Cold Spring Village Board voted unanimously Tuesday (June 28) to pursue bond funding for a $1.5 million rehabilitation of the major, century-old water line running down Main Street from Fishkill Road in Nelsonville to the railroad tracks in Cold Spring. Dealing with a packed agenda in a 135-minute workshop, the board also discussed Church Street traffic and set a date for another vehicle-related issue, a proposed law allowing police to “boot” cars of repeated parking-ticket scofflaws.
The water pipe project involves a $250,000 upgrade of the control panel at the fresh-water treatment plant and the $1,285,000 cleaning and relining of the 10-inch iron pipe, heavily encrusted inside with build-up after more than 115 years of use. Initially, the water main work was to extend only from the New York City water supply Catskill aqueduct on Fishkill Road to the pressure-reducing valve just below the intersection of Main Street and  Morris Avenue-Chestnut Street (Route 9D) in Cold Spring, at a cost of $930,000. However, after deliberations Tuesday evening with Water Department Superintendent Gregory Phillips and Ronald Gainer, village consulting engineer, the Village Board chose to extend the repairs to the railroad tracks, adding another $355,000 to the price tag. The cleaning and relining is expected to dramatically improve not only fire-flow, the pressure and water necessary to fight fires, but to reduce discoloration. Both fire-flow inadequacies and a periodic rusty tint to tap water have been ongoing concerns for years. 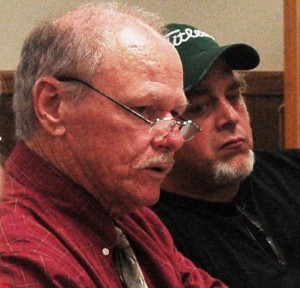 “It’ll go back to being very near a 10-inch pipe,” with a slight reduction in the original interior size due to the very thin lining installed, Gainer told the board. “It’s going to produce a significant increase in fire-flows “¦ beyond what’s recommended” by insurance standards for firefighting. Although the work on the Main Street main won’t affect all sections of Cold Spring and Nelsonville, which will “still have very poor flow,” he said, better fire-flow should be realized in many areas near Main Street. “You get benefits beyond the pipe you’re installing” or renovating, he said. “Any improvement, I think, would be worth it.” The cleaning itself “is a remarkable process,” he added. “You can’t believe it. It’s amazing the debris that comes out.”
“We’ll have to sift it — an archaeological dig!” Phillips joked.
Fire-flow problems came to the fore on Christmas Eve in 2009, when an inferno destroyed a large home on Main Street between Cold Spring and Nelsonville and damaged an adjacent house while threatening the Town Hall on the other side. Gainer’s firm wrote a sobering, but long-buried report 19 years ago on the fire-flow and pipe-encrustation problems. Even in 1992 “flow carrying capacity was reduced to less than one-third of its original capacity,” he told the board on Tuesday. Last year, after the Village Board discovered the 1992 study, Gainer updated it with a 2010 report that likewise found that “adequate fire flows cannot be delivered to most areas of the existing system.”   Despite the importance of the project for safety, Trustee J. Ralph Falloon, a professional firefighter, noted its overall relevance. “This isn’t just for fire-flows,” he said. “This is the first part of rebuilding infrastructure.” He and Trustee Airinhos Serradas suggested work on the water main could begin in about three months, assuming the financing proceeds smoothly.
According to the resolution adopted by the Village Board, the financial arrangements entail issuance of serial bonds to finance the project,  with “the collection of water rates [user fees] and the levy and collection of taxes upon all the taxable real property in the village to pay the principal “¦ and interest” of the bonds, paid back within 40 years. Robert P. Smith, of Hawkins, Delafield, and Wood LLP, the village’s financial advisor for the bonding, nonetheless advised that although the maximum bonding term allowed by law is four decades, the village should anticipate a term of about 20 years.
Nelsonville and fringes of Philipstown also draw clean water from the Cold Spring system. The Cold Spring board’s resolution referred to repaying the bond obligations in part through Cold Spring village taxes, raising the question of whether Nelsonville municipal taxes and taxes on properties in Philipstown relying on Cold Spring water likewise would be tapped. A query posed to Mayor Seth Gallagher Wednesday night received no immediate response. 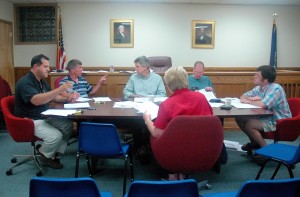 A week after Gallagher and Gainer walked Church Street with residents concerned about speeding and traffic, the board heard from more Church Street residents — at odds with their neighbors over the extent of the problem or over whether a problem even exists. In his capacity as the village’s traffic engineer, Gainer wrote and on June 21 distributed a six-page memo outlining potential Church Street traffic-calming measures, including installation of curb bump-outs at the intersection with Northern Avenue and a similar bump-out and crosswalk mid-block. That set off alarms bells among some longer-time residents on the block. “I really am unhappy,” Donna Steltz told Gallagher and Trustees Falloon, Serradas, Bruce Campbell, and Charles Hustis. “You’re always going to have speeders. There hasn’t been any reports of accidents or children hurt.” She objected that not all the residents of Church Street had been notified in advance of the mayor’s walk-through with Gainer. “You met with people who are new to the street. People that are here today have lived here a lot longer than the people that are complaining.”
“They contacted us. So we decided to go out and do an on-site visit,” Gallagher replied. When Steltz pointed out that drivers similarly speed down Garden Street, where he lives, around the corner from Church Street, Gallagher agreed. “It is a problem, too. So we’re trying to find out ways to slow people down.”
Church Street resident Betty Budney, who serves on the Philipstown Town Board, suggested installation of a STOP sign at the corner. “We’ve talked about that, too,” Gallagher replied.
Tom Virgadamo said he had lived on the street more than two decades. “I don’t want a kid getting killed,” he emphasized. Nonetheless, he expressed doubt about the need for the supposed improvements. “All of a sudden this street has got to be changed all these different ways? You going to do every street like this?” On Church Street, “people have been speeding for 22 years,” Virgadamo said. “Any block of Cold Spring, people are going to fly down — once in a while.” He suggested that Church Street parents remain attentive to their children. Steltz concurred. “They need to watch their kids,” she said of the residents worried about traffic. “I don’t know what their concerns are.”
“I agree it’s a dangerous street sometimes,” John Landolfi said of Church Street. But he came to the meeting to urge action on another street, Paulding Avenue, where his children live. “That’s an extremely dangerous street,” he said, especially on Saturdays when the Cold Spring Farmers’ Market takes place on the grounds of the old Butterfield Hospital site, which borders Paulding Avenue. “This is an emergency, there.”
For Church Street, Serradas suggested the village borrow the Putnam County Sheriff’s Department portable monitor, which informs drivers of their speeds as they pass it. The suggestion generally met with a favorable response. Gallagher promised also to convene another meeting for all Church Street residents to talk about the traffic situation together. “We’re going to follow up,” he assured Steltz and Virgadamo.

Public hearing on car boots
The board scheduled a public hearing for 6:45 p.m., Tuesday, July 12, for a proposed law to allow police to “boot” cars — immobilize them with clamping devices — that have accumulated $200 or more in unpaid parking tickets, if the vehicles are found on public streets. The board initially discussed the idea nearly a year ago. Also on July 12, after the “booting”-law hearing, the board has slated hearings on two other proposed laws, on revising the village code regarding fence heights and the definition of “half-storey” as applied to buildings.
Photos by L.S. Armstrong