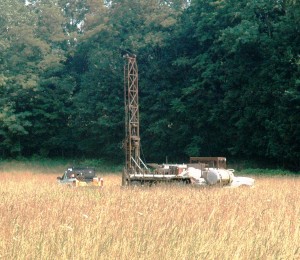 Cold Spring residents packed the room at the Tuesday (July 19) Village Board meeting to tell Environmental Protection Agency staff of ongoing worries about the toxin-tainted Marathon battery site, following announcement of a new EPA clean-up stratagem. The EPA on Monday released a 10-page addendum to its 2008, full-scale 5-year review of conditions at the entire Superfund site, which includes not only the former Marathon battery plant land on Kemble Avenue but areas of the Hudson River.  The addendum outlined a new method for dealing with an underground trichloroethylene (TCE) plume, a threat to groundwater and a potentially harmful vapor if exposed in the air. Despite various attempts in the last 15 years, the plume has eluded removal. [See Philipstown.info, July 19: EPA Finds Battery Site Short-Term Protective; Need for Long-Term Eradication]  A 2009 map in the addendum report shows the plume as being about 390 feet wide at its broadest.
At the meeting, homeowners on Constitution Drive expressed concerns about the plume and posed questions to EPA representatives Pamela Tames, an engineer, and Michael Sivak, a risk assessor. Robert and Doreen Ferris noted that their house bears the dubious distinction of containing equipment to prevent any vapors from endangering indoor air. “I live on the plume. Something’s going on in my house for a reason,” Ferris said. He and his wife urged that the EPA check the device once a year to ensure it functions properly.
Sivak described the device as similar to an anti-radon unit. He said it was put in place in lieu of yearly EPA testing at the Ferris home, as an optional gesture. Pollution “levels did not require that,” Sivak said. Nor, once installed, does the device require annual checks, he added. “These systems work.” However, he agreed to request yearly inspections under auspices of Gould Inc., the company that succeeded Marathon.  Overall at the Marathon site, “right now there’s no exposure” by anyone to hazards, Sivak said. “In order for there to be a health effect, there has to be some exposure. Nobody’s drinking the groundwater,” he said. A high fence encloses the Marathon property, which resembles a large meadow. Sivak pointed out that many common products, such as water repellant for shoes and spray-on fake snow, contain small amounts of TCE.
Tames observed that Constitution Drive also has radon. A potentially hazardous gas, radon can be given off naturally by rock formations in the Appalachians, the chain that includes mountains in the Hudson Valley. 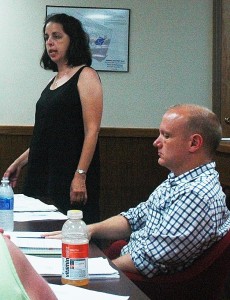 Vacuuming up the mess

The two EPA representatives said that the firm handling the on-site plume clean-up would use an air-sparging system, akin to a household vacuum cleaner.  “We’re going to be sucking it up in a big old vacuum,” Sivak said. An EPA diagram shows an apparatus housed in a rectangular box. “What we’re looking to do is get rid of the source,” Tames said. TCE has persisted over the years, despite earlier attempts to remove it, she said. “We have not found new contamination. But levels in the plume just haven’t gone down to what we’d like them to be.” Preliminary drilling began this week. “They’re putting in more wells so they can really zero-in on the source,” she said, referring to the engineering firm handling the on-site work. Some residents criticized the EPA for only reviewing the situation every five years. Tames and Sivak tried to debunk that perception. “We’re always looking at it,” Sivak said. “This five-year review is just the formal [report] of the remedies” utilized and conditions.
One resident wondered if the clean-up would be worse than leaving the plume in place. Others, including Ferris, raised questions about home sales and property values. Some asked about potential development on the Marathon site, now owned by Ken Kearney of The Kearney Realty & Development Group. In terms of the plume’s implications for property values, “I think it can only be a good thing to take care of it,” Tames said.
“So this new plan could potentially benefit a property owner? Trustee J. Ralph Falloon asked Tames — drawing an answer of “Yes.”
As for building on the site after the clean-up, Tames said, “when the work if finished, you’ll be able to develop the property without any issues. We have agreement with the property owner to do this work.” 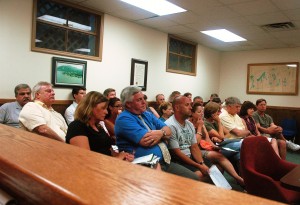 Awaiting a process
Kearney subsequently mentioned his willingness to wait. “It’s a process. We’re patient. We’re busy in this very bad economy” on other projects, he said. He also said that following his standard practice in such construction, he intends to install radon mitigation units in any homes built on the Marathon site. “Absolutely!”
The EPA representatives also told the Village Board and audience that a “pedestal” pit, where a cadmium nitrate tank once occupied a factory platform, remains below ground, excavated during the clean-up and filled with limestone and clean back-fill to keep remaining cadmium insoluble and thus incapable of causing trouble. Excavation below 15 feet is forbidden in that section.
After the meeting, Ferris again expressed skepticism about the EPA’s approach, especially in regard to statistics on possible danger. “You don’t bring 3-year-old data to a place like this,” he said. “They should have up-to-date data. Show me the numbers.”
Photos by L.S. Armstrong

5 thoughts on “Residents Tell EPA, Village Board of Ongoing Worries over Marathon Site”