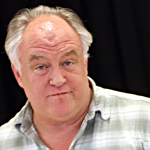 Part one of a two-part article.
This part focuses on the early days of the festival and its development in the community.   The second part, which will appear shortly, addresses the present and future.

Terry O ‘Brien has been at the helm of the Hudson Valley Shakespeare Festival (HVSF) since its inception, 25 years ago, in 1986.   The Festival has always been located in Philipstown, beginning life as a bit of a traveling player, with stops along the way at Manitoga and Garrison School before finally homesteading at Boscobel.   In those 25 years, the reciprocity between town and troupe has deepened, with the Festival able to draw upon the varied talents of the local population and the town reaping the cultural and economic benefits as the HVSF has expanded its reach and increased its audience with each season. 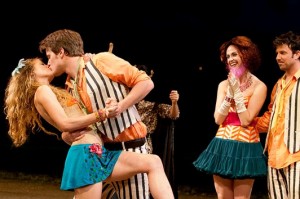 The first stirrings of the Festival began in Garrison when Manitoga Board Member Anita Hart, also on the board of the Garrison Art Center (GAC) asked her fellow GAC board member, Melissa Stern, an actress, for her help in putting together a theatrical fundraiser for Manitoga.   Stern, a former classmate of O ‘Brien ‘s at the American Conservatory Theater in San Francisco, got in touch with him, knowing that he was connected to the Twenty-Ninth Street Project, a theatrical collective. It was decided to perform A Midsummer Night ‘s Dream outdoors, in “Mary ‘s Meadow,” a large open space, in the wooded grounds at Manitoga.  Casting from the pool of actors associated with the Twenty-Ninth Street Project, rehearsals took place at the Project ‘s space in the city, with O ‘Brien directing and Stern producing.
With the barest of technical capacities (“three household dimmers and “funeral parlor flood lamps,'” remembers O ‘Brien) Friday night ‘s performance, the first of three, was magical in the woods.  Saturday afternoon ‘s was moisturized with drizzly rain, with up and down umbrella action, and Saturday evening ‘s was rain-soaked and had to be halted.   On Sunday it was pouring, and the location shifted to the Garrison School, where the no frills production values continued. “We duct-taped the lights to aluminum ladders and the kindergarten classroom, with its 12-inch chairs, served as the dressing room,” recalls O ‘Brien.   All in all, about 220 people saw these initial performances.   As a benefit, it was, according to O ‘Brien, “high maintenance, low yield, but it sparked something beyond that.”   The next year saw the organization ‘s birth  as a 501C-3 nonprofit corporation, with Melissa Stern ‘s husband, Peter, suggesting Boscobel as a possible permanent home.

O ‘Brien describes Boscobel in those days as “quite different to what you see now.   There were no trails.   That magnificent view was all grown over.   When we got there, we actually set up the tent facing the highway.   Our first production at Boscobel was As You Like It, and we wanted to stage it in the trees near the Rose Garden, using the rain tent as a backup.   By this time we had nine lights and these huge, 100-pound theatrical dimmers, which threw off sparks.   We even called our stage manager Sparky! As we evolved, we changed the direction of the stage.   We always wanted a thrust stage, with the action closer to the audience.”

Once the transition to Boscobel was made, the Festival began to grow “glacially,” according to O ‘Brien, with gradual increments made in house size, length of runs (initially the performances were on Thursdays, Fridays and Saturdays, then Sundays were added, and finally Wednesdays and Tuesdays), and season durations.   The seventh season brought a second production, one following the other, not the repertory style used now, into the mix. Drawing upon the enticements of the setting for picnicking and overall ambience, Westchester residents began attending in great numbers. O ‘Brien says research showed that “If someone saw us two times, they would keep coming. By our 12th year, 65 percent of our audience had been to six seasons or more. During the first six or seven seasons I saw every performance in the house. I got a sense of the audience ‘s sense of humor and what excited them. What took place on stage was a symbiosis of my own sensibilities and my observations of the audience ‘s.” 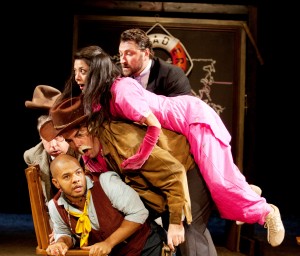 In the beginning, the audiences, volunteers and board members were largely local.   As O ‘Brien describes it, “In some ways we are late to mature. We were blessed with a strong, hard-working ‘working’ board.   It was initially a very grassroots board, pulled from the community here.   They did everything from baking brownies and lemon bars – which we miss! – to supporting us in fundamental ways: as ushers, doing promotion, everything.   As we grew, these things became harder to do.   Our volunteer ushers became paid house staff; our concessions became professionally run.   We ‘ve continually tried to pay professional actors more, making that a priority. Our board has now shifted away to become more involved in governance, fundraising and development, and as our audience has grown beyond the borders of Cold Spring and Garrison, our board reflects that now too, drawing from Westchester, the city and the other side of the river; we ‘re even looking to Connecticut now.

Our Advisory Board is populated by a lot of former board members from Garrison and Cold Spring.   People like Carol Marquand, Marit Kulleseid, Sheila Rauch, Nancy Berner “all staunch supporters from way back who were once on the regular board.”   Board and Advisory Board members are not the only local residents who have had lengthy interaction with the Festival.   Through the years local children have come to production after production, developing an appreciation of Shakespeare hard to generate so early without such easy access. Many have gone on to work at the Festival, either as box office and house staff, or as apprentices and, in some cases, as actors, Lucky Gretzinger, who is appearing in sizeable roles in Hamlet and Comedy of Errors this season, being an example. Gretzinger ‘s program bio reads “Lucky is thrilled to be back in his hometown for this landmark HVSF year.   Previous roles at the Festival include parking cars, ripping tickets and Balthasar in Much Ado About Nothing.” O ‘Brien names others: “Brett Travis, Patrick Halley, Zach Petkanas, Rachel Ritacco, Dan Marzollo, and Will Marsh, who ‘s now our photographer.   They all came to see productions when they were five, eight years old, and they came back.”

In joining actors and a creative staff who were and are largely based in New York City with their summer community, O ‘Brien says there have always been deep connections, “I remember back as far as the As You Like It days.   We all jumped in a van at Columbus Circle on Thursdays at 3 o ‘clock, and there was a collective sense of ‘we ‘ve arrived’ when we got across the Bear Mountain Bridge each week.   A lot of relationships have formed between people in the acting company and people up here; long-term friendships have formed.   In some ways this has become a kind of home to many of them.”
Terry O”Brien photo by A. Rooney
HVSF production photos by William Marsh

End of Part One

One thought on “Betwixt Town and Troupe: 25 Years of Shakespeare in Philipstown”