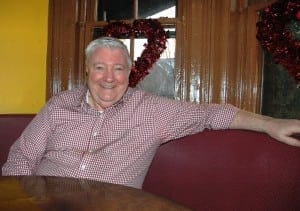 With a platform of four key issues Depot Restaurant owner Tom Rolston has announced his candidacy for trustee in the March 20 Cold Spring village elections. A native of Conrad, Iowa, who came east after college, renovated urban townhouses, constructed restaurants in New York City, and managed million-dollar television production budgets for NBC, Rolston moved to Cold Spring in 1981. Four years later he opened the Depot, in the defunct 19th-century train station just off Main Street, and says he built it into “a multi-million dollar business.” For years, he has been involved in major-party politics in ways that don’t involve elected public posts: He chaired the Philipstown Republican Committee at one stage and currently chairs the Philipstown Conservative Party. This year, he is switching gears to pursue a non-partisan elected public office.  His agenda, if his bid proves successful:

“I’m a doer, not a talker,” Rolston said in a brief interview at the Depot late Friday afternoon (Jan. 6). “I really have no complaints about how the village is run. I do think it takes too long to get things done.” A regular and often outspoken attendee at Cold Spring Village Board meetings, Rolston, 64, served on the Cold Spring Special Board for a Comprehensive Plan-Local Waterfront Revitalization Plan as well as three of its “working group” subcommittees.

Promising to have more to say as the campaign unfolds, Rolston succinctly outlined his ideas on each of his four planks. He said getting sales tax for the village is important because “we’re producing a lot of sales tax for the county” but do not get any of it back.

Ideally, the Butterfield project should include “something that brings us better tax dollars,” he said. “My attitude is that with these developers you must negotiate. And I’m a pretty good negotiator.” He said he really liked one concept for the Marathon site, featuring “live-work” structures – homes that include artisan and craft shops or similar low-key, small, owner-operated businesses. Like the Butterfield property, the Marathon site is one of the village’s remaining large open tracts proposed for development.

Rolston also cited the importance of the post office for the village. “I want to make it a priority,” he said. As for parking, “I want to investigate the situation” because at present “parking is definitely on the back burner” as a village government priority, Rolston explained. He suggested that options include paid parking. “How can you turn down a couple hundred thousand in revenue?” he asked. Tourists spend money in the village already, which is good, he noted. However, he continued, “let them put some of that money back into village coffers.” That includes visitors who arrive by boats “parked” at the waterfront, he said.

The election will determine the future of the trustee positions currently held by Charles Hustis and Airinhos Serradas, both elected for the first time in 2010 to two-year terms. Village elections are non-partisan in the sense that candidates do not run on tickets of the major political parties -– Republicans, Democrats, Conservatives -– though they can create their own parties.

Rolston calls his slate –- with him as the sole candidate — the Common Sense Party. “My symbol is a light bulb, and the filament says ‘a better idea!’” he said. He launched his campaign on Tuesday (Jan. 3), circulating his candidacy petition at the Village Board meeting. However many names he garners, there’s one long-time Cold Spring resident not likely to provide a signature, despite close ties to the Depot: The ghost of a murdered Victorian lady who reportedly haunts the place!
Photo by L.S.Armstrong