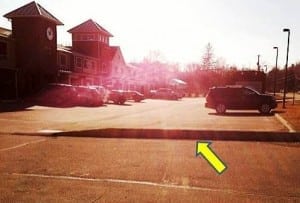 Town Code Enforcement Officer Kevin Donohue has declared a concrete barrier sitting near to the ground between the Gulf station and the Philipstown Square (formerly Perk’s Plaza) on Route 9 at Fishkill Road a safety hazard.  Donohue issued a violation notice to the listed plaza property owners, Lausca LLC and John P. Scanga, ordering removal of the barrier and also the installation of landscaping as indicated on the original site plan approved by the Town Planning Board.

The concrete barrier is not on the original site plan. The action came after an inspection Donohue conducted in response to a citizen complaint about a serious car accident. The property owners have exercised the right to appeal the order to the Town Zoning Board of Appeals (ZBA), according to Donohue. The ZBA has not taken action to date.

1. The concrete barrier along the north side of the property does not appear on the March 24, 2010, Planning Board-approved site plan and is a hazard to traffic and circulation between adjacent lots and not in compliance with the zoning law.

2. The landscape island in the northwest corner of the parking lot has not been installed as shown on the March 24, 2010, Planning Board-approved site plan.

Donohue, in an interview with Philipstown.info, said he believed the barrier was the scene of other car accidents based on debris and oil and anti-freeze stains he saw when making his inspection. A complaint by Garrison resident JoAnn Brown prompted Donohue to act. After she suffered a total loss to her 2011 Camry upon hitting the barrier, Brown called Town Board officials who directed her to Donohue.  Brown said she had entered the Gulf station last Dec. 3 and was proceeding south toward the Square. She said although she wore sunglasses and had both hands on the wheel, because of the sun in the southern sky she did not see the low-level barrier. The impact of the crash deployed the car’s airbag, banging her head and frightening her.

“The sheriff and the ambulance came immediately, they said ‘we knew exactly where you were,’” said Brown, who said the responders indicated she wasn’t the first. She said she also saw evidence of other cars having had scrapes with the barrier. Brown was taken to the hospital, x-rayed and pronounced fine. “I was protected, everything went right for me; but a child may have suffered brain damage.”  Brown said she understood there is a process for the town to get the condition changed. “But something should be done sooner [rather] than later, before someone is actually seriously injured,” she said.

2 thoughts on “Concrete Barrier Site of One or More Accidents”