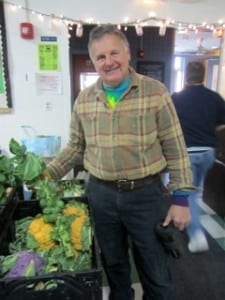 Earlier this winter Philipstown.info visited the Cold Spring Farmers’ Market, and did a round-up of all the vendors. An introduction and talk with Dan Madura, of Madura Farms, presented so much material that we decided to devote a separate story just to their winter farming methods.

Securing Madura Farms as a year-round vendor was pivotal to the existence of the Cold Spring winter market. As market co-manager Steve Bates observed, “When we first thought about a winter market, it had to be with the standard that what you see in fall is essentially the same as in January. Our people won’t come for just pastries. Madura’s participation made it possible to do an indoor market at all. We had two big hurdles: of the 100 or so indoor markets in New York state, 75 percent of them are within the New York City environs. Of the remaining 25 percent, only a small fraction operate weekly. The older model of stocking up and operating less often doesn’t work for the bread vendors, for whom weekly operations were necessary.”

For Dan Madura, the monthly market idea was also not a workable one. “It’s hard to get vegetables ready just once a month. Especially since he was able to provide more than enough vegetables each and every week, no matter what type of winter occurs any given year. Madura’s family has been farming for generations, since the late 1800s, in fact.  Known for their mushrooms, they began farming that crop in 1977, after growing disillusioned with growing lettuce. Frustrated because “California would flood the market with lettuce in summer, trying to drive New York out of business, I started looking for alternative crops for survival purposes, and came up with mushrooms. I’m a big reader and researcher and I starting reading up.” One helpful source was Mycelium Running, by Paul Stamets, from Olympia, Washington, from whom Madura still orders spawn. “I had insulated buildings then, and I started thinking why not vegetables and mushrooms in winter? … So, I started experimenting and lo and behold, it worked. The mushrooms set the pace.”  Now the bounty is there for months. 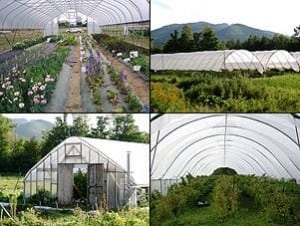 For the past ten years or so, Madura has been utilizing “high dome” tunnels. High startup costs (each unit costs about $6,000) deter many considering this technique, but Madura was aided originally by New York state funding (which has now run out) and was able to get going using the 100 x 30 x 11.5 structures, in which he has now honed his techniques, making them quite conducive to multi-season farming. In the warmer autumn temperatures, Madura is able to grow as much as in the summer.  Lower temperatures equate to lesser amounts grown, so there is slower growth in winter, but there is still growth.

Madura starts crops like spinach, kale, arugula, chiso, beets, and mesclun mix in a traditional greenhouse, and then moves them to the high tunnels. The tunnels get passive solar heat. Madura describes it, “If you water with a garden hose sprinkler during the day, from 9 a.m. until noon, the ground winds up heating up from the sun, creating moisture, and fog and perpetuating a warm climate — your own climate, sealed airtight.” 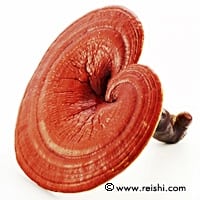 In his seven greenhouses, Madura has experimented with lowering the temperature “within reason — not too low” and thus saving on fuel. He uses minimal heating at night, and the water method during the day. Madura’s crops now include red-veined kale, spinach, tomatillos, garlic, leeks, beets, peppers and more, but mushrooms are a mainstay, and Madura knows his fungi. In addition to many varieties of fresh mushrooms, Madura also sells dry richi, which he calls “anti-cancerous. It gets rid of insomnia, allergies, so much — it’s a very powerful mushroom with lost of medicinal powers. You break it up, put it in water and make tea. The Japanese believe it is the mushroom of immortality and that just looking at them brings you good fortune.” He began with richi last year, after spending two years researching it heavily —“I waited to see if there were any negatives,” — as he does for all that he grows.

Most of Madura’s family is still in farming, “we’ve all stayed at it.”  The original 726 acres have been divided up, and Dan farms his portion with his brothers Chris and Ron. His other brother John has his own farm.  It’s more than full-time work, and at times Madura has done it alongside other, non-farm, full-time work, toiling over 100 hours on a combination of the two. Still, he has passion about what he does, and believes that changing world markets can only increase the need for greater production of vegetables in years to come. “In five to ten years we won’t be able to afford beef in this country. Texas had to sell off beef because of drought. There are all these climate and economic changes. It’s not on or radar yet because we haven’t suffered yet. We need constant education. A lot of kids think that packages grow on the fields — it’s tragic. The Great Depression marked the greatest disparity between the poor and the rich and it’s now again coming to fruition. To me there is no downside in building the high tunnels because we will need that food. It’s a shield from the environment and pollutants outside. … We were given food.  It’s our job to learn how to assimilate it.”

Madura Farm produce can be found at the Cold Spring Farmers’ Market all year long.  The market, now in its winter incarnation, is open from 8:30 a.m. until 1:30 p.m. every Saturday at the Philipstown Recreation Center off of Route 9D.  For more information visit the Market’s website.

Photos by A.Rooney, except as noted.

One thought on “Growing Vegetables in Winter”